I am not doing an extensive tape analysis this week, but the "tape" is the game and the game is what I love and what I love to write about. Here's a little parable and then we'll talk Aaron Curry highlights.

One day when I was a teenager, and I don't remember exactly when but it was winter, I decided I was running away. I am impulsive but rarely rash but in the tug of war between the two, impulsive can pull the rope out of rarely rash's hands before it knows the game has started. So I found myself walking down the street barefoot. It wasn't frigid cold and back then I was rather arrogant about what "cold" meant in the Pacific Northwest after having lived in New England for most of my life, but it was cold enough. What didn't hurt right away slowly took its toll and by the time I had reached a local Fred Meyer about a mile away, my feet felt like frozen hellfire was in their soles.

I walked into the anteroom of the Fred Meyer and sat Indian style on a bench. I pushed my feet under my thighs and hoped dearly the pain would subside. Though I did my best to hide my feet the suffering was written all over my face. To my right was a ripoff crane machine and Bloody Roar 2. To my left was the suddenly cold cold outside. I was marooned.

After sitting and suffering and wondering if something had broken and the pain would never stop, this "Russian" kid approached me. He didn't speak English particularly well, but destitute and scared speak a universal language. He noticed my bare feet and offered help in a way that I didn't understand but understood enough to feel ashamed about. I declined. I declined and he walked away but returned with his mother and a pare of broken down L.A. Gear sneakers. I said "no." I said "no," but pride faltered and fear and appreciation for human kindness eventually made me say "yes."

I put on those sneakers and walked home.

Not all damage occurs in big, splashy attacks. Sometimes things break down little by little until the sum is unbearable. That has been the story with Aaron Curry and why highlights don't accurately portray the player. He makes some big plays, but he undermines the Seahawks with lots of little screw ups. But fans don't need me to take this team to task one play at a time to know it is severely flawed, and so lets suspend reality for a post and just talk about the good Aaron Curry.

Here are some of his best moments from week 14.

Seahawks set in their bandit package. The one Carolina solved in week 13. Curry is playing under tackle beside Raheem Brock.

San Francisco is set four wide, two a side, running back right, shotgun.

Roy Lewis and Jordan Babineaux are pressuring the edges. Lewis is disguising it. Babs is locked in a sprinter's stance. Lofa Tatupu is between Chris Clemons and Brandon Mebane. He is also showing pressure.

Seattle sends five: the line and Tatupu. This has become their go-to blitz out of the bandit package. Mebane draws the center-left guard double team and Tatupu winds around his back and right towards the right "A" gap. He's able to draw Anthony Dixon. As he does, Curry is separating from Chilo Rachal and is free, in line and within two yards of Alex Smith. Clemons has Barry Sims beat on the left, but it's irrelevant. Curry wraps and sacks Smith for a loss of ten.

Curry erupts from defensive tackle through the right guard and to Alex Smith in under three seconds. 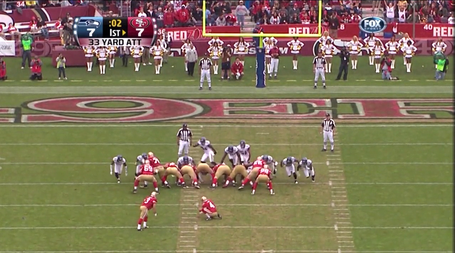 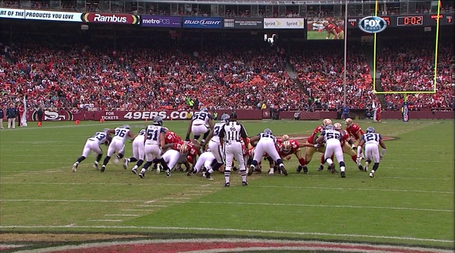 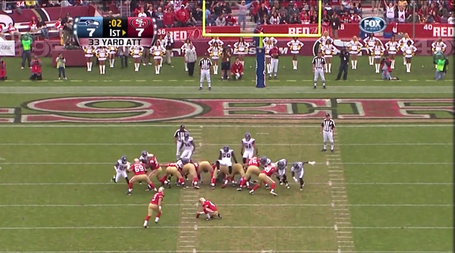 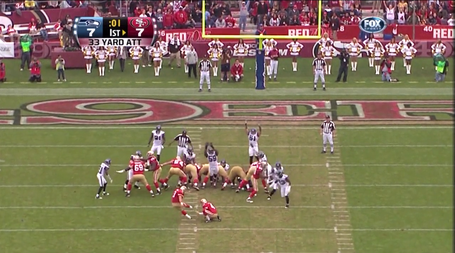 Delanie Walker is split wide in the left slot. Smith recovers a low snap and dishes it to Walker. Walker is running a quick curl. Curry breaks right but is able to recover almost immediately, and good thing. Earl Thomas closes on Walker but Walker runs right past him and Curry becomes the last line of defense. He catches Walker in space and saves the first down.

Curry is playing tackle out of the bandit package. Curry and Brock are both wide right, and positioned to overload the left and right gaps of right offensive tackle Anthony Davis. Lawyer Milloy blitzes the middle, and the combined attack frees Brock and Curry. 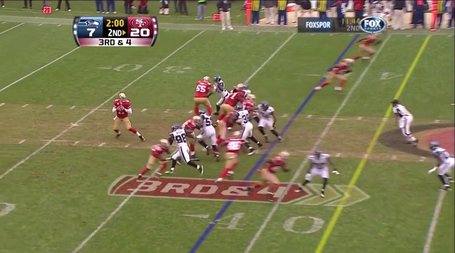 It's all good but for the execution. Smith hits Brian Westbrook on an angle pattern and one (more) broken tackle by Thomas later and Westbrook receives for 62 and the touchdown.

Curry is flagged for an illegitimate roughing the passer penalty.

Curry is a step slow closing from his zone, but it's an improvement. His immense talent does the rest. He closes on the fastest tight end in the NFL and forces Vernon Davis out of bounds for no gain. Curry is so in control that the officials rule the play dead in the field of play and the clock continues to run.

Curry contains the strong side, buries a shoulder into Anthony Davis and uses the rebounding momentum to close and tackle Westbrook off right end after two.

Curry reads motion, maintains his gap and reads run. It's directed right at him, lead blocker and all. Barry Sims pulls out to block Curry and Curry swats him away like he's nothing and resets in the hole, ready to tackle Anthony Dixon whenever he arrives.

Seattle shows a 3-4 look with Curry and Clemons playing outside linebacker. Smith takes it and throws short to Michael Crabtree. Curry negotiates trash and closes from the left, finishing the tackle Marcus Trufant started.

And that's all we've got for one week. We'll do some more stuff like this for other players over the next few weeks.