Maybe it was delayed momentum. Or maybe it was momentum transmitted only within the special teams unit. Yes! Yes! It must be so! Must. Conform facts. To. Existing world view. Must.

Chiefs start two tights ends right but motion Leonard Pope left. Pope blocks Chris Clemons. Some might think I am hammering this point past exhaustion, but this is what runs against Seattle's weak side look like. 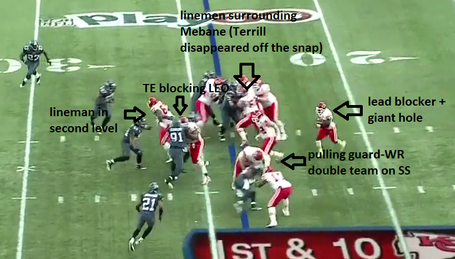 Ryan Lilja pulls around left end and attempts to block Lawyer Milloy. Everything else is working, and this should be automatic, but as you can see above, he blocks high and Milloy squirts underneath. Milloy ankle tackles Jones after ~one but Jones is able to use his abundant momentum to continue for a total of about four.

A run, a four yard run, saved from being worse by Milloy splitting a guard-wide receiver double team and ankle tackling a sprinting back. That's execution we can rely on.

Chiefs set two tight ends right, but motion Tony Moeaki to fullback in an offset-I (left) before the snap. This is a simple run off left end. Right tackle Barry Richardson -- filling in for Branden Albert at left tackle -- turns Clemons inside and sets the edge. Moeaki attempts to block David Hawthorne, and though Hawthorne evades, it's only after Charles is parallel and gaining. Verran Tucker locks down, forces back and pancakes Kelly Jennings, and Jennings' fallen body picks out Earl Thomas and forces him to pursue farther up field. Thomas finally forces Jamaal Charles out of bounds, but only after 12.

This time, Chiefs run at the Seahawks strong side, but it's Mebane that makes the play.

Charles motions into a slot back position on the right, for lack of a better description. That puts him beside a two tight end set on the right, and all that Red is only balanced by wide receiver Terrance Copper on the left.

Chiefs stretch right. Charles runs an end around and Matt Cassel fakes to Charles after handing off to Jones. Mebane gets a great jump off the snap, powers through the Casey Weigmann-Lilja double team and angles to intercept Jones, forcing him wide. Balmer beats right tackle Ryan O'Callaghan and Jones, sensing imminent tackle, plunges under Balmer and forward towards Trufant, Hawthorne, Tatupu, Terrill and Milloy. Balmer or Trufant "tackle" but, in reality, Jones tackles himself to squeeze something from a broken run. 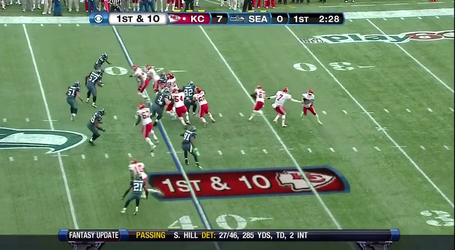 Tru is injured on the play.

Chiefs stretch right towards the strong side. Balmer is doubled out. Terrill and Curry close on Charles with Mebane in pursuit. Charles does what a zone blocking back is supposed to do. He splits Terrill and Curry and takes advantage of the surge of blockers into the second level. Hawthorne, Thurmond and Milloy close and tackle after seven.

Chiefs set with three tight ends right. Kentwan Balmer is able to isolate the innermost tight end, Leonard Pope, and power him back and control the edge and separate to force Charles right, right, right, until Hawthorne can push him out of bounds. Great, great play by Balmer.

He forces the hold to boot.

Seahawks rush five, with Tatupu serving to draw Richardson and isolate Clemons on Pope. That's good. Tatupu doesn't create pressure at first. Clemons tears through Pope, forces an uncalled hold, sheds and fells Pope and forces Cassel into scrambling left. Tatupu does a good job of keeping himself unblocked and once Clemons has pressured Cassel into breaking the pocket, Tats pressures off left end and forces Cassel to stop. Clemons catches Cassel from behind and Cassel throws the ball away to avoid the sack.

It's been a good week to grouse, but though Clemons has his limitations, he's an excellent pass rusher.

How does this happen?

You can go ahead and watch the highlight. One sly little sneak attack makes this possible:

1. Earl Thomas ambushes off left end. Just before the snap, he moves away from blocking gunner Verran Tucker and towards blocker Jackie Battle.

2. That creates confusion between Battle and Terrance Copper. Battle shades out to block Thomas but Copper doesn't adjust to pick up Kennard Cox. He moves right and picks up Matt McCoy.

3. Kennard Cox rushes through untouched and blocks the punt attempt by Ryan Succop.

4. Thomas rolls through Battle's block and recovers for the touchdown.