Share All sharing options for: Seahawks at Buccaneers Win Probability

Here's the latest in a season of meaningless second halves.

The 2010 Seahawks must be a lot easier to feel excited about for those that only occasionally watch games, or turn off games, or have strong powers of denial.

A season lasts 960 minutes of game clock and Seattle has played 900. None of the Seahawks six wins were "miserable," by my chosen definition. In Seattle's nine losses, the Seahawks held a 25% or lower win probability for 314:26 of game clock. That's about 58% of the total game clock in those nine games, over five hours of active misery, and -- assuming a 3 to 1 ratio between real time and game clock -- a little under 16 hours of real time misery. 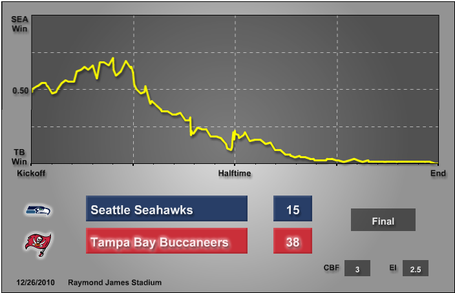