Aaron Curry rivals only Kelly Jennings as my least favorite Seahawk to scout. Jennings is miserable in a traditional way. He is a puff of smoke quickly dissipating. Beating Jennings turned out to be as simple as beating a Mega Man boss. He looked so intimidating and invulnerable until quarterbacks targeted him. His tight cover solved by his mortal weakness: the football.

Curry aspires to have a mortal weakness. He's stage fodder. A Big Eye bouncing around that can only hurt you if you're drunk or drunk or drunkest. He's clueless, and that is really surprising.

Hyper-vaunted, super linebacker prospect Aaron Curry was on the ball, around the action, instinctual and all that jazz. I want to gloat, dig up some report in which I found otherwise, but I didn't. Curry looked smart, assignment correct, Ruskellian.

He has looked anything but in his short pro career.

Here's a run that started towards the weak side. Curry abandoned strong side contain and allowed a huge cutback lane. 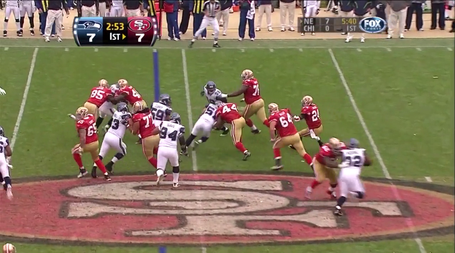 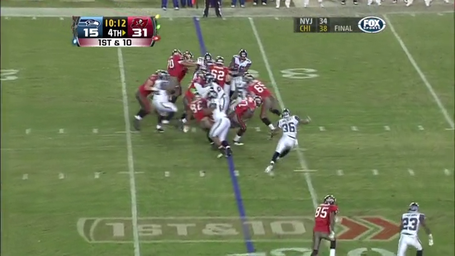 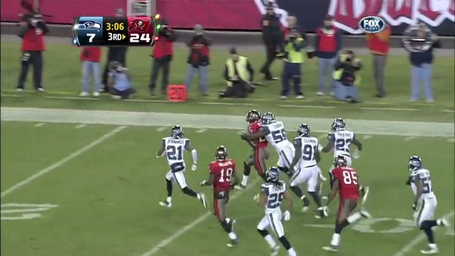 I unearthed these treasures yesterday, but they're indicative of Curry's overall season. Curry's good at being heads up where the action isn't and running away from where the action is about to be. He shows flashes of adequacy between blunders. Right now, Curry does two things well: overpower blocking tight ends on the strong side and rush the passer from defensive tackle. In almost every other capacity, you hope beyond hope that Curry doesn't factor into the outcome of the play. You hope he either nondescriptly does as asked or if and when he doesn't, the opposition doesn't exploit it.

Curry was a late bloomer. He wasn't heavily recruited out of high school. He didn't stand out in his freshman or sophomore seasons at Wake Forest. Curry burst onto the scene as a junior. That's when scouts started buzzing. Curry returned three interceptions for touchdowns for the Demon Deacons. He had four interceptions on the season. Four interceptions, 13.5 tackles for a loss, three sacks, two forced fumbles. Stats! Stats! I say! And yet more stats as a senior: 16 tackles for a loss, 2.5 sacks, another pick, another forced fumble.

Maybe Curry is a late bloomer. Maybe Tim Ruskell's penchant for drafting finished products has skewed my perspective of how young talent develops. The kid is only 24. How do I know Derrick Brooks wasn't a mess his first two seasons? Everything seems so obvious in retrospect. The kid, honing his tools, mastering the game, rough but ready to excel. The kid, like a bull in a china shop, out of position, slow to react, taking bad angles, showing poor form tackling, mere months from seizing greatness?

That doesn't jibe. Curry is maybe a little better this season than last. If he's a little better next season than this, it will be time to begin wondering aloud if he's a bust. Gus Bradley earned his reputation as a defensive coach through his work with linebackers. Pete Carroll, Dan Quinn and Bradley have worked to position Curry where he can succeed. His work as a situational defensive tackle is encouraging. A healthy return of Red Bryant, a bolstering of depth at strong side end, could again free Curry to rush the passer off the strong side. Ultimately though, Curry needs to learn how to play outside linebacker at the pro level. His problems transcend scheme. Does he understand the challenge in front of him? Have his coaches effectively challenged him to improve not a little but like a man fighting for his job? I don't know. We may not know until September of 2011.