Share All sharing options for: Panthers at Seahawks Win Probability

Haven't posted a win probability graph in a few weeks because of server malfunction, but yesterday's win was defined by two big swings in win probability. Want to understand how Seattle was able to take over in the third quarter and run away with it in the fourth? Check out those two double black diamonds created by Lofa Tatupu's interception return touchdown and Leon Washington's 84 yard punt return to put Seattle on Carolina's one. 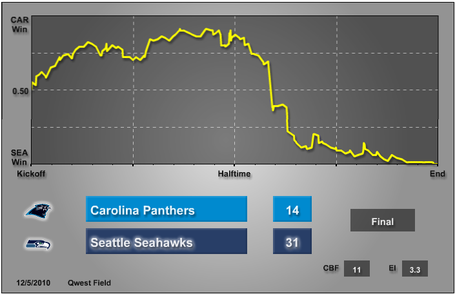 Tatupu's interception flipped the course of the game.

His tackle numbers are down, but some of that is a product of a scheme that funnels tackles to the weak side. Tatupu contributes to tackles made by David Hawthorne by cutting down the lead blocker and penetrating and redirecting runs. His tackle numbers are also down because he has been slowed by a knee injury. Even accounting for all that, 2010 has been his best season since 2007. He is no longer a Pro Bowl caliber middle linebacker but he's a steady presence in coverage and his pick six against the Panthers was a Golden Age Tatupu play: Tats jumped the route and was clear to the end zone. He may not be 100%, but Tatupu does look quicker and more agile than in seasons past, and maybe that's a function of Chris Carlisle's different approach to strength and conditioning.

In retrospect, Tatupu probably deserves the game ball. It put Seattle ahead and following Washington's near touchdown return, the Panthers were forced to pass. Those two plays won the game for the Seahawks.