Carolina walked Seattle down the field and scored a touchdown on their opening possession. That put them at a 71% win probability right away. That's not too surprising, really. Win probability doesn't see a seven point lead as insurmountable. It sees a team scoring a touchdown after four minutes of elapsed game clock to pull ahead 7-0, and, comparing it to years of other NFL games, sees an opening that correlates with lopsided wins.

I still wonder if this game couldn't have been lopsided barring a few essential turns of fortune. If game state allowed the Panthers to continue running the ball in the fourth quarter, and the Panthers ran effectively as they had for most of the game, would Seahawks fans assume the defense collapsed because it was tired? Despite the Seahawks blowout win, the Panthers still won time of possession.

Carolina had run for 126 yards prior to the fourth quarter. Maintaining that pace, Carolina would have surpassed 160 yards on the ground. I take a lot of positive from yesterday's win, but the run defense seems as broken as ever.

That porous run defense has forced Earl Thomas to be much more active defending the run than anyone wants. Last week, against Kansas City, Thomas had four tackles against the run. Those four tackles ranged from eight to 27 yards down field and totaled 57 yards. He only had on tackle against Carolina. So what was he doing for the rest of the game.

Let's see if we can find out.

Thomas is 14 yards deep and just right of center.

Prior to the snap, Panthers tight end Gary Barnidge motions right. Correlating with that motion, Lawyer Milloy backs off and Thomas moves up to five yards past line of scrimmage and outside the right tackle. Panthers run a stretch left, but there's very little push and Aaron Curry breaks through into the backfield. Stewart reverses field and runs towards right end. Thomas is playing contain off right end and he has effectively kept himself in position and unblocked. Stewart then cuts right and up field. The defensive line has been pushed left and space develops up the middle. Stewart breaks an arm tackle by David Hawthorne before finishing for a gain of six. Thomas doesn't factor further.

Thomas is out of the frame, deep. Clausen passes towards Steve Smith. Smith is running a curl against Kelly Jennings and Jennings doesn't even turn to look at the pass. Thomas breaks towards the play but way too late to make an impact. The pass is low and short and Smith can't secure it before it hits the turf, incomplete.

Thomas is deep. He breaks towards the pass, but is about seven yards behind and another five or more to the right of the receiver at the time of the completion.

Again, Thomas is deep and out of the frame.

Jennings is playing off Smith. Clausen turns and fires and Smith runs past Jennings and up field. Thomas positions himself to intercept, but Hawthorne is able to pushed Smith out of bounds after eight.

I always laugh when people mention Jennings' lack of tackles. There are many ways to accomplish that feat.

Panthers align with two tight ends on the right. Seattle, somewhat enigmatically, assigns their weak side right and opposite the Panthers two tight ends. In a move designed to beat a Sicilian in a game of wits when death is on the line, the Panthers motion the outside tight end left.

Thomas is 11 yards deep and over center. He responds to the motion by backing up and out of the frame (roughly 15 yards deep) and left of center.

Carolina powers the Seahawks strong side back. Jordan Gross is able to single block and control Kentwan Balmer. Junior Siavii is blown back by a double team and the left guard peels off and attacks Lofa Tatupu. Two things prevent a long run: Mebane knifes in and gets and arm on Stewart in the backfield. He isn't able to tackle but he does arrest Stewart's momentum. Curry fills the rush lane and tackles Stewart, but the push is too much and Carolina converts the first.

Thomas does not factor into the play.

Carolina is aligned two wide left and Thomas plays over the slot receiver: David Gettis. Gettis motions right, forming a kind of three tight end set on the right. Thomas drops deep and, correspondingly, Milloy moves up on the right. Clemons is playing wide of Gross and standing. That he stands makes all the difference.

Jennings is off and Clausen takes the snap and turns and targets Smith. The pass is low and hits Clemons in the chest. Gross hardly touches him.

Seahawks break in another 3-4 look. Thomas is left of center and about 13 yards deep.

Panthers pitch left, but it's not pitched wide but more or less straight back. Mebane controls left guard Mackenzy Bernadeau and creates a kind of floating wall between Stewart and the hole. Siavii slices in from the right.  Stewart is forced to zigzag to reach the line of scrimmage, and Balmer and Hawthorne rally to track down and tackle. That he still runs for two attests to the kind of explosive power Stewart has.

Thomas closes just before the tackle but does not factor.

The stuff sets up third and long. This is the down and distance Seattle's defense is geared to exploit.

LaFell motions from wide right to right slot before the snap.

After about a second, we see the developing carnage: 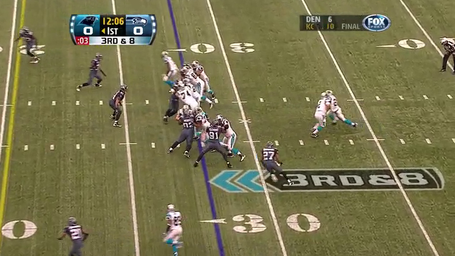 Mebane more or less holds his gap against a double team, but double teams against Curry and Brock are decisive and Clemons never escapes Gross.

Geoff Schwarz peels off Curry and blocks out Tatupu. The Panthers line is so far down the field, it looks like a screen pass. 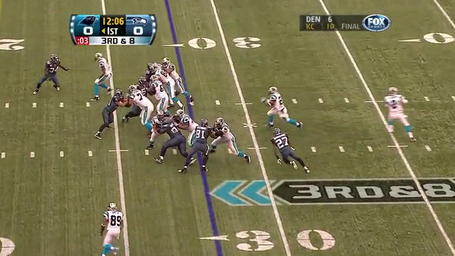 Stewart isn't even technically out of the hole until he's two yards from the first down marker and he never passes Schwarz. It's a moving hole, eight yards long, and Stewart uses it to develop momentum. Thomas closes but doesn't attack. He contains the outside left and lets Stewart come to him.

Milloy sprints from the third level. He arrives and lowers a shoulder and hits Stewart just short of the first down. Milloy hits low. Thomas is positioned to hit high. 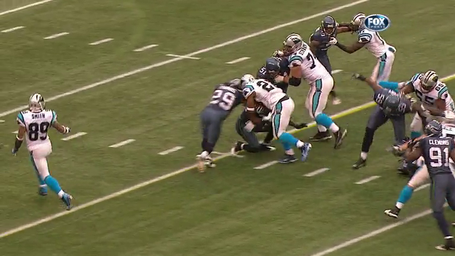 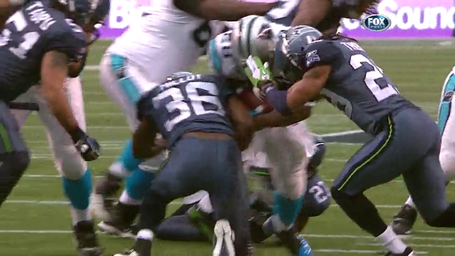 Thomas falls off to the right and Stewart powers through for another two yards and the first.

I think ET got caught in the headlights.

Thomas is deep and to the left. The Panthers double Balmer and cave in the right edge and that allows this run.

Milloy separates from Gettis and tackles Goodson and is that only thing that delays the touchdown.

Thomas does not factor.

Thomas is ten deep and over center.

Carolina attacks Seattle's weakside. There's two failures that allow the touchdown: Clemons is moved back and turned. Mebane holds ground against Schwarz, but Hawthorne trips him in the process of stuffing fullback Tony Fiammetta. 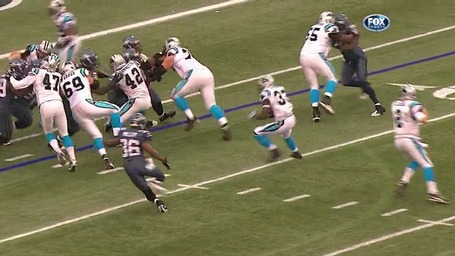 Mebane goes down. Hawthorne is turned. 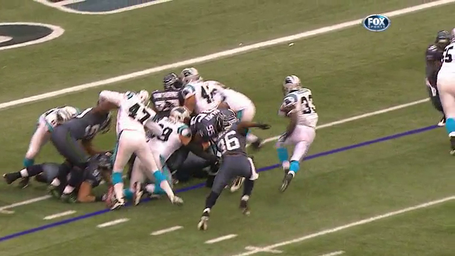 And so develops a hole Megaweapon could drive through.