It takes one snap for Russell Okung to display how much better he is than his linemates. 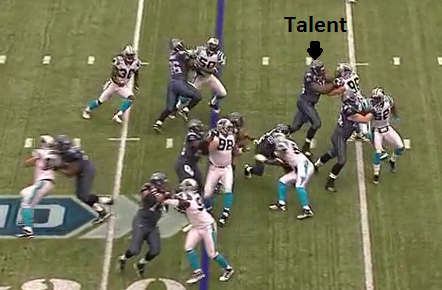 Okung gets a good jump, gets under 6'6" 280 pound defensive end Tyler Brayton and walks him back three yards past the line of scrimmage. Marshawn Lynch follows his left tackle. He zigs left and towards Brayton and Brayton is able to disengage enough to tackle Lynch. Lynch stumbles forward and is down after eight.

Okung walks Brayton back two yards before disengaging and burying a shoulder into free safety Charles Godfrey. Godfrey staggers back one and a half yards.Running tally, Okung: 6.5 yards. Opponents: 0.

Behind Okung, Derek Landri has beat Stacy Andrews so badly that Andrews and Chris Baker are forced to hold Landri from behind as Landri closes and crushes Lynch. He has just received the hand off. Lynch does his best to beast through the tackle, but Panthers swarm and he's stopped in the backfield for a loss of five. It's a drive-killing screw up.

Hasselbeck audibles out of shotgun and into a stretch right. It's a sound audible, especially against the Panthers 3-2 front. Two Seahawks do their job exceptionally well. Neither is Stacy Andrews or Sean Locklear.

The key here is Everette Brown is unblocked. He shouldn't factor so long as Justin Forsett can achieve a clean release into the second level. Okung pulls forward. Chris Spencer angle blocks Nick Hayden and it's a beauty of a block. With one shoulder, he pushes and turns Hayden and passes him to Mike Gibson. Gibson is stumbling over his own feet before he can even reach Hayden but he recovers and contains. Spencer and Okung combine to block outside linebacker James Anderson in the second level, and Anderson is rubbed out. He's not going to factor in this lifetime.

There is a moment before everything breaks down where it's clear how this play is supposed to work: 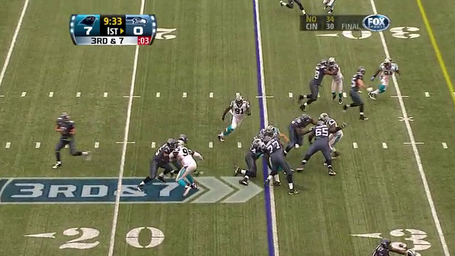 Brown is trailing. Williams is blocking corner Captain Munnerlyn on the right. Okung and Spencer have Hayden surrounded. In that seem between Locklear and Gibson-Andrews is great potential. Yet, you can already see how this play fails.

Charles Johnson dominates Locklear and as Forsett attempts to pass his inside shoulder, Johnson raise his right arm and hooks Forsett, slowing him. Jon Beason separates from Andrews and extends his left arm and grabs at Forsett. 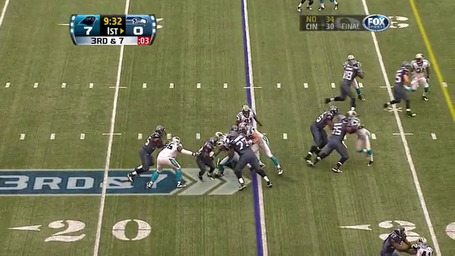 Forsett slowed, Brown can catch him from behind. Force makes it five yards before being tackled from behind. He falls forward and onto Mike Williams left ankle.

Locklear gets some kind of pass because of the difficulty of his assignment. Andrews runs too far right, has to suddenly cut back in and barely touches Beeson before Beeson is making a play on Forsett.