See you at Qwest

Share All sharing options for: See you at Qwest 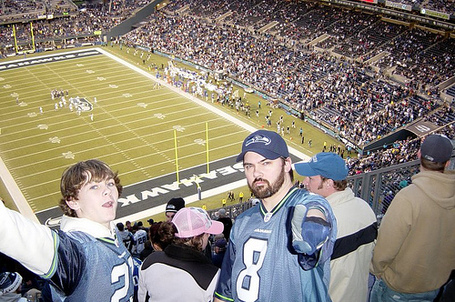 Friday is the deadline for season ticket holders to lock down their seats for another year, and despite a 6-10 home record over the last two seasons, the Seattle Seahawks will undoubtably sell every season ticket package that is made available. I renewed my seats today, even though Mr. Allen's minions raised the price of my uncovered seats in section 325 AGAIN. Over the 13 years that I've had season tickets, a lot of things have changed for the Twelve Army... Let's take a look back:

In 1996, Ken Behring announced his intentions to move our team to Southern California, accelerating the fraying of the team's relationship with its fans. Eight years after buying the team, Behring had entirely destroyed the love affair between Seattle fans and their pro football team that grew between 1976 and the glory days of the Ground Chuck era. Home games went unseen on local television, as thousands of seats went unsold and empty (unless a popular opponent rolled into town), and us dead-ender Twelves became second-class sports citizens during the height of Mariner mania...

At the time I was in college up at Western, and Bellingham was in the blackout zone... This meant I went to games when I could, but more often I'd drive back home to the Tri-Cities to watch the games. When Alpha Nerd Paul Allen swooped in and offered to buy the team if a new stadium was built, I shamelessly used my radio show on KUGS-FM to push people into the "YES" camp on Referendum 48. After it barely passed the Seahawks announced something astounding: $10 seats. To NFL games.

Even as an impoverished college student, I could scrape together the $200 for a pair of season tickets. I got seats in the top row of the 300 section, in the south end zone opposite from the Kingdome jumbotron. That might sound pathetic, but I could stand up for the whole game without pissing anyone off, I had a little shelf behind my seat to put my coat, and I could make even MORE noise by banging on the metal panels behind me.

After I moved away to Ohio for grad school before the 1999 season, I kept my season tickets. I would go to games when I came back home to visit, and either gave the tickets to other games to my friends or sold them on eBay... Since I became a season ticket holder I've been to 16 games at the Kingdome, 4 at Husky Stadium, and 14 at Qwest Field (including 3 glorious playoff wins)... Today my seats are 290% more expensive than they were in '97, but I'll keep paying up as long as I can keep convincing myself that the second I give the seats up, the team will get back in the playoffs and I'll be stuck watching the next NFC Title Game/Romo Drops the Ball/Tru Pick 6 TO CLINCH THE WIN on TV.

Any other season ticket folks around here on FG? Share your stories in the comments, y'all.