Gus Bradley proves a blitz of five can cause disruption, pressure, incomplete passes, sacks, interceptions and, oh yes, fumbles returned 70 yards to the end zone. Seattle forces pressure by isolating every lineman and awaiting for one to fail. Both ends edge rush. Mebane charges. Hawthorne stunts underneath attempting to draw the left guard.

In practice, this is where Tapp swoops into the left guard gap and destroys Mike Teel playing Kurt Warner.

Now it looks like a failed blitz. By that I mean: the scheme itself is not working. It's up to the talent.

Seattle has a win at right tackle. Kerney is more than enough edge rusher to rush Levi Brown. Jackson does his job, but this is not a sure win, and he doesn't win. That puts an end on a guard and a three on a guard. Mebane is good, but so is Deuce Lutui. Lutui wins this round. Wells wasn't surprised and is simply outsizing Tapp on the inside.

Miles Austin responded with a beautiful catch on the right sideline. He was double covered and reached out nearly out of bounds to grab the ball. It's worth noting that Austin looked every bit the real deal, exploding out of the blocks and running tight routes.

That got Dallas out of jail. On the next play, Dallas pulled out its left side and directed fullback Deon Anderson at right end Darryl Tapp. Tapp has to win this, but doesn't and that allows Felix Jones a clean release through the hole -- Flozell Adams and Kyle Kosier blocking into the second level. Adams destroyed Aaron Curry and Jones picked his way towards the third level. Jordan Babineaux hit him before the marker but Jones twisted for the first. It could have been worse. It should have been worse.

St. Louis went from an unbalanced line to an unbalanced formation. It aligned two wide receivers and a tight end right, a single receiver left and Jackson the tailback. Seattle showed off its first iteration of a pass rush line, Darryl Tapp, Redding, Craig Terrill and Kerney defensive right to left. Tatupu and Hill challenged the "A" gaps. Nickle coverage. The Rams motion Avery in tight, creating a pseudo-bunch off right tackle. Kerney exploits the bunch to rush into the backfield untouched, threading between McMichael and Keneen Burton past Smith and at Bulger. The linebackers release into hook zones. Jackson picks up Kerney. Bulger takes a seven step drop, but can barely set before Tapp rips past Barron and hits Bulger as he releases. Hill tackles Avery well short of the first.

Before he punched him, Richie Incognito held Lawrence Jackson. He hooked his right arm around Jackson's torso and pulled him from the play. To his credit, Jackson stayed in the thick and helped clear the lane for Lofa Tatupu to drop a shoulder into Steven Jackson. Jackson rushed right because Darryl Tapp had wrapped around left and sprinted down behind the line.

Give John Lynch credit. When Darryl Tapp reacted to the cut block by defending and almost intercepting the pass, Lynch was on it in a second. He pointed out the read and complimented Tapp's awareness. That is on the spot analysis that enriches the game.

If you believe in momentum, the Seahawks were a rolling ball of neutron stars after the score. In little over a minute and over the span of three plays, Seattle declared the first touchdown would stand.

Will Herring shot the gap and shot past Steven Jackson. Seattle swarmed and finished the tackle, but Herring needs to learn when to slow down and square before lunging at the ball carrier. Thankfully, Lawrence Jackson was there to contain and slow Jackson and Darryl Tapp streaked from the opposite end to tackle him.

The star was, is, Darryl Tapp. Tapp was playing right end in Seattle's pass rush line. Beside him was Redding. Redding got a great jump off the snap and that allowed Tapp to move forward and then laterally, stunting towards a sagging pocket. Baas dropped his double team of Redding and engaged Tapp. Or tried to. Tapp met Baas with a swim-spin-swim and ran past him and towards Hill. That flushed Hill out of the pocket and into Terrill's arms. My words don't do the move justice. It was cool.

Darryl Tapp saved a long play on the first pitch out. He was the only Seahawk who diagnosed the play and ran into the left flat to tackle Gore. Without him, that could have been another long run.

The next play, Cory Redding wrapped around Darryl Tapp's blocker-arresting first step and pressured Manning into targeting outlet receiver Joseph Addai. The pressure placed the pass low, and as Addai scooped it from the turf, Aaron Curry lowered a shoulder and flashed prowess as a zone defender. It was shades of Leroy Hill blasting Ryan Grant into a fumble.

Gus Bradley's play design is clearest if I knock out the offense and just show the defense. It's another little wrinkle that turns on the versatility of Darryl Tapp and Aaron Curry. The play turned into a run stuff that caught Matt Forte for a loss of one, but it would have crushed a pass too. Call it a blitz if you will, but Seattle ripped through the Bears offense with only four pass rushers. Here's how: 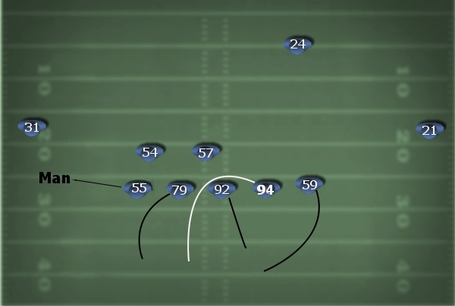 The white indicates a delay. Redding adjusted and ran to the ball carrier, but it was clear he was designed to stunt and run a path very similar to the one he actually ran. Brandon Mebane ran clear into the backfield untouched. That really gummed up everything the Bears were trying to do as the pulling left guard had to redirect and meet Mebane in the backfield. Bryant was single-blocked by Olin Kreutz. That was a big ol' handful of not happening as Bryant tore through him and right to Forte. Call it a loss of one and a half.

Darryl Tapp was sure he had forced a false start. He stood up and pointed emphatically, but no flag was coming. He barely knelt into his three-point before David Garrard snapped. Tapp was on the ball as ever, and after making a quick move outside, he cut in and pressured Garrard. His inside move separates Tapp from a run of the mill edge rusher.

As does his linebacker like run tackling. On the next play, Tapp turned such a tight angle and flashed such pursuit speed, I couldn't be sure he wasn't Aaron Curry. He wrapped around end and caught Maurice Jones-Drew from behind after a gain of two.

Tapp was everywhere on the nine-play drive Seattle silenced with assignment-correct football at the two. He assisted on a run tackle for no gain and showed improved ability to hold the long edge on another down. He used a rip to force an incomplete and a spin to force a check down in the red zone. He went inside and nearly knocked left guard Vince Manuwai into Garrard.

Darry Tapp factored into almost every play. He hurried passes and contained. He shot behind the line and chased down Jones-Drew. Tapp isn't Cory Redding and doesn't demand double teams. Though he's bulked up, he's reasonably small. If talent came to order, Tapp might be a little lacking in so and so, but that's not the game.

If Tapp was the Tapp Seattle drafted, he could still start. That's the comparative importance of pass defense to run defense. He isn't that player though. Tapp is more disciplined. He doesn't start every play sprinting towards the edge. He can hold ground and control. He can cut in and avoid the chip. He can tackle in the open field better than many linebackers. Through fourteen plays in the first quarter, Tapp showed he is a complete end and a vital part of Seattle's future.

Then, for a brief shining moment, Darryl Tapp nearly undid a half's worth of damage and put Seattle back in the lead. It was another moment where Seattle missed by inches. Tapp rushed around left end and forced back Flozell Adams enough to block out Romo's preferred throwing lane. Tapp jumped as Romo motioned and Romo tucked before taking another attempt. The ball sailed behind intended receiver Roy Williams, but where a good break nets a pick six, Josh Wilson skidded and the pass proved too errant. Ironically, an accurate pass results in a pick six.

The decision to restructure the line around Colin Cole was stupid when made and has led to predictable results. Seattle's third down stand, in which Tapp knifed through Mike Gandy and tackled Wells in the back field, is a great example of how important Mebane was to Seattle. Mebane was on the right, beside Tapp where he belonged. Cole was on the left. Seattle was in a five man front, but Mebane was still double teamed off the snap. It was an ugly, but effective display. He hit his blockers low, getting topped and dropped, but holding ground and most importantly, freeing Tapp. Tapp took apart his single block and used his great inside move to come free to the ball carrier.

Bad things were about to happen for the 49ers.

Darryl Tapp anchored against tight end Delanie Walker and forced Gore to cut back inside. Tapp slowed Gore and ankle tackled him into and onto prostrate non-entity Craig Terrill. Terrill, through no achievement of his own, played an essential part in the play. His was the body that kept Gore from being down.

Here's where hustle gets its due: Wilson started the play just outside the tackle box and in position to be blocked by a pulling lineman. And so he was. Right tackle Adam Snyder pulled out and put a body on Pistol, but Pistol didn't quit. He went high on Snyder and yanked him aside by the shoulder pads. Back in the scrum, Babineaux recovered and punched out the fumble. Gore was attempting to wrestle his ankle free and somewhat atop Terrill. The ball bounced forward and toward no team in particular before a streaking Wilson looped into the action and recovered for 43 yards.

It was the single most important play of the game, worth 30% of win probability, worth more than Matt Hasselbeck's late strike to Deon Butler, and more than the field goal that won it.

2010 Outlook: Good luck in Philly, Darryl. It has been a pleasure watching you work.