I am Jack's broken heart: My 1999 Seattle Seahawks Story

Share All sharing options for: I am Jack's broken heart: My 1999 Seattle Seahawks Story

We are all Seahawks fans, and all of us have a story of how we became foot soldiers in the Twelve Army. We also have certain seasons that build  huge piles of riprap around the pillars of our fandom. This is one of those stories.

In the summer of 1999, I hoisted myself out of the happy little rut I had dug for myself in Bellingham to attend graduate school at Ohio State. I left all my friends and a place I loved because it was the "mature thing to do." Plus, I had no idea how to do anything but go to school. I went on a trip with my parents and little brother down the Oregon Coast before I moved, and in almost all the pictures from that trip, I was clad in my Galloway jersey (which got promptly shelved once the greedy prick started missing games due to his contract dispute with Holmgren).

In mid September I drove cross-country with my best friend, and he dropped me off at my new home: Jones Graduate Tower. My room was basically a cinder-block prison cell with cable TV and high-speed internet access. No friends, a new town, a dank living space, and the brutal initiation of an elite PhD program sent me into a deep depression.

What saved me? What kept me going through these dark days?

There was a shopping area adjacent to campus, and three things there helped me maintain my sanity: a Target, the AMC Lennox 24 where I watched the great movies from the fall of 1999 (Fight Club, Being John Malkovich, Three Kings, Magnolia, The Iron Giant, Toy Story 2, etc), and an overpriced Champps sports bar that had NFL Sunday Ticket.

My connection to the Seahawks had always been strong, but now it was my unbreakable diamond tether to the Pacific Northwest. Watching the Hawks was a little taste of home that I could lose myself in, and that made cramming shitty appetizers and cheap beer down my gullet for three hours every week worthwhile  Plus, I've always been a contrarian pain-in-the-ass, so being a rabid fan of an NFL team the Scarlet and Grey masses had barely heard of held a certain appeal to me. I also adopted the attitude of a proselytizing missionary on Seattle's behalf, because I was the first Seahawks fan many folks in Columbus had ever met (a year later, my future wife would admit that she didn't know Seattle had an NFL team, and thought that the Kingdome was in Minneapolis).

Quickly a weekly pattern emerged: 5 days of drudgery, sitting through classes designed to break my spirit and crush my imagination into dust, followed by weekends of binge drinking with the couple of friends I latched onto, taking in yet another great flick from the class of '99, and for a couple of months, watching my Seahawks beat ass on Sunday.

With Elway retired and The Big Show taking over in Seattle, the AFC West looked winnable in 1999, and after dropping the home opener to Detroit, the Seahawks would win 8 out of their next 9 games, It started when Glenn Foley (Who?) led Seattle back from a 13-0 4th quarter deficit to steal a win in Chicago, and for two months our boys looked like Super Bowl contenders. I'd strut around campus in my Springs or Tez jersey on a Monday after a win like MacArthur through occupied Japan, using Seattle's success to cover up the pungent stench of my own anxiety and depression.

The Seahawks notched blowout wins at Pittsburgh and Green Bay. They beat Denver and Oakland at home in dramatic fashion. They even got a win at Arrowhead for the first time since the Krieg-to-Skansi miracle, which was punctuated by Ricky Watters' throat-slashing gesture in the final minutes. Our Hawks were 8-2, and had a great shot at the #1 seed in the AFC playoffs. It was hard to imagine anyone coming into the Kingdome and winning a playoff game, particularly in the Dome's final season before demolition. During classes, I'd daydream about the Seahawks; Once I even looked up how long the drive would be from Columbus to Atlanta, site of XXXIV (9 hours).

Then Warren Sapp and the Buccaneers ruined everything (just like Marla Singer).  Tampa's defense brutalized Jon Kitna, forcing 5 interceptions and exposing Central's favorite son as a very ordinary NFL QB. As I struggled to survive my first quarter at Ohio State, the Seahawks entered a forlorn month of defeat and despair. I arrived back in the Tri-Cities for my first visit back home... just in time to absorb one of the most painful losses in team history.

The Seahawks were going for a season sweep over the hated Broncos at Mile High, but trailed 30-20 with less than two minutes left. Amazingly, the Hawks went TD-Successful Onside Kick-FG to send the game to OT. One play after Kitna missed a wide-open Galloway by inches for what would have been the winning TD, he took a blindside hit, fumbled, and Glenn Cadrez ran it back for Denver's winning points. In a few minutes, I went from depression, to elation, to a near-catatonic state of disappointment.

I was Jack's complete lack of surprise.

While the Seahawks were collapsing from 8-2 to 8-6, The Chiefs ascended from 5-5 to 9-5. The rivals would meet in the Kingdome's final regular season game on Boxing Day, with Seattle needing a win to stay alive in the AFC West race.

I was at that one, and the only time I've heard a louder Seahawks home crowd was at the 2005 NFC Championship. 65,000 Twelves KNEW that the Hawks were dead on their feet, but they were going to do all they could to drag these half-dead Seahawks into the postseason for the first time in 11 years. Those 11 years of humiliation, frustration and defeat came raining down upon the Chiefs as sheets of noise... They never had a chance. Here I am at that game, 10 years and 50 pounds ago: 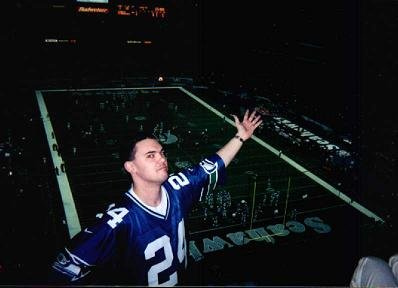 Unfortunately, that win clinched NOTHING. The Seahawks still needed a road win over the surging Jets, or a Chiefs loss at home to Oakland. I returned to Bellingham to ring in the new millennium with my college friends, and had to be talked out of transferring to UW by my old Western professors. I was filled with dread about returning to Columbus in a couple of days. In my heart, I knew my depression would be compounded by the Seahawks missing the playoffs again.

I tried to convince myself that the Seahawks would be motivated: For a shot at the playoffs, to get revenge for the "Phantom Touchdown" a year earlier, for that blowout loss at the Dome in '97... but Seattle couldn't match NYJ's intensity, and they meekly bowed out in a 19-9 loss.

So the Twelve Army was reduced to the ultimate in humiliation: Being forced to root for the Raiders. From the occasional scoring updates, it looked bleak: KC jumped out to a quick 17-0 lead. By halftime it was a shoot-out, with Oakland up 28-24; once the Seahawks game was over, I tormented myself by watching the final minutes from Arrowhead. The Raiders had to convert a 4th and 13 on their game-tying drive late in regulation, then Pete Stoyanovich missed a 44-yarder on the final play that would have eliminated Seattle. Oakland won the toss, got set up at their 40 by an out-of-bounds kickoffs, and Joe Nedney kicked Seattle into the playoffs.

It was weird to celebrate backing into the postseason, but I did so lustily anyway, with an assist from our good friend alcohol. That night I flew back to Ohio, so I'd have to watch the Wild Card game against Miami from my drab little pad. I have to admit I cried on the flight back east, for a lot of reasons.

Miami also started 8-2 before plunging to 9-7, so they seemed like a beatable opponent. Even though I didn't have any realistic hopes of Seattle reaching the Super Bowl anymore, it had been 15 years since our last playoff win. Getting one in the Kingdome's final game would have been nice.

Watching that game by myself was slow-motion death. The offense could get little going, and the defense couldn't get a fossilized Marino off the field. The heroic Charlie Rogers gave us a 17-10 lead with a 2nd-half kickoff return TD, but the Hawks couldn't hold on. With the game and season over, I just sat there for what seemed like hours. Exhausted, empty, and alone.

The worst part? My only close friend in Columbus was a Dolphins fan. We hadn't talked for a week, and wouldn't for another. My only chance at revenge was in Madden 2000.

Without the Seahawks to distract me, I became more miserable than ever. Thankfully for my sanity, it was only 3 months later that I started dating my future wife... but those were a rough 3 months. Even though the season ended in defeat and heartbreak, it made my bond with the Seahawks stronger than ever, and for that I'll always have a weird soft spot for that underachieving 1999 team.

What are your memories of 1999? What season(s) were filled with deep personal meaning for you?

For more of my unhinged ramblings, check out my home blog: Dave Krieg's Strike Beard.