Seattle is not guaranteed to be a good team. It reinforced that doubt in the resulting offensive series.

John Carlson motioned out of tight end and Seattle aligned in a three wide receiver, "I" formation. The Seahawks attempted to stretch right, but Rob Sims and Max Unger struggled to sustain their blocks and the hole collapsed around Julius Jones.

Ray Willis and Sean Locklear allow the ends to cave the exterior pocket, but neither loses control of their defender. The interior line holds position until Justin Griffith can pass Max Unger's right shoulder. That's the signal to pull. Rob Sims throws a wicked push block on Clifton Ryan and uses that separation to run towards the left flat. Steve Vallos drops his double team with Unger and runs a more vertical route into the second level but towards the third. Will Witherspoon drops coverage from Carlson and attempts a tackle. Matt Hasselbeck retreats right and away from Locklear and targets Jones just as he clears the right defensive end. 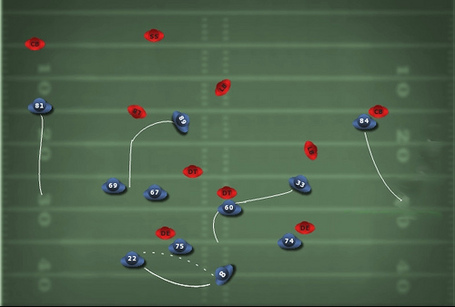 Sims cut blocks Witherspoon and Jones is sprung to the second level. Vallos flattens his angle and drops O.J. Atogwe. Nate Burleson stands up Jonathan Wade. Jones runs behind the downed Sims, weaves behind Vallos and must only navigate James Laurinaitis and Wade to take a head of steam into the third level. Carlson moves up to block Laurinaitis, but can't control or even stagger him. Laurinaitis keeps Carlson out of his body, shades towards Jones and disengages to hit him head on and wrap. Jones lowers his shoulder and carries the play another two yards. It's a nine yard gained marked as eight.

The line is stretching right, but it's a variation. Sean Locklear pulls hard right and ignores the opposing defensive end. Rob Sims moves forward and cut blocks the right defensive tackle and obstructs the right end. Steve Vallos blocks Laurinaitis, then attempts to screen and run past him. Max Unger drops and pulls around right tackle Ray Willis. Willis is blocking in, engaging the left defensive tackle. The left defensive end is blocked back and turned by Owens. Jones takes the short hand-off and runs right and between Willis and Owens. 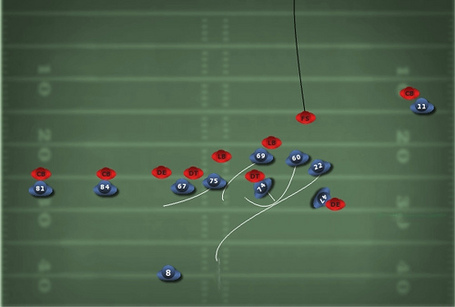 Steve Vallos and Rob Sims powered through Aubrayo Franklin and Edgerrin James had the space between the defensive ends for a hole. He took the ball and ran forward into the pile. It's limited snaps yet, but James has been a disappointment. He hits the hole if he can reach, but a rusher needs some kind of moves or at least cutting ability.

Spencer snapped and then fluidly pulled into the second level without delay. He engaged Hunter Hillenmeyer and took him out of the play.

The single most impressive block was by Rob Sims. He locked up right defensive tackle Israel Idonije and then threw him to the ground.

Seattle started the drive with Edgerrin James in the backfield. He stumbled for one yard and then wasted the concerted push-left of the offensive line punctuated by a clean and well timed trap block by Rob Sims. It's moments like this you realize an offensive line creates opportunities, but the back must be able to cash in.

Forsett curled, caught and unwound towards the end zone to score six and give Seattle the lead. He was in before a defender could touch him. Spencer pulled out immediately and wormed into Willis' body. Last season, Spencer slammed Willis but Willis slammed back, separating and tackling Jones after eight. This time, Spencer stayed with Willis, not attempting the knockdown block, but keeping on him, staying square and jogging the All Pro into the end zone. Sims pulled late but cut Mark Roman on a crucial backside block. Unger pulled cleanly, found Dre Bly and threw a schoolyard beatdown on the former Pro Bowler. He squared, coiled and blocked Bly into the air and onto his back. Touchdown.

For most of the season, Chris Spencer protected Unger. If a man was aligned over Unger, Spencer would typically turn right and double the defender. Rob Sims was the reliable guard. He was left to fend for himself. Unger proved capable of controlling his man and that allowed Spencer to read and react. It proved critical.

Lock was badly beat around the end by Manny Lawson. Sims controlled his man and Spencer stood free in his center zone. Spencer turned that freedom into a crucial freeing block. He doubled Sims man and the two dominated him so completely that Sims was able to pull free and pick up Locklear's blown assignment. What looked like a sack turned into a fifteen yard completion.

2010 Outlook: It was that kind of season for Sims. He was rarely ever bad. He had some highs, but not a ton. When Pete Carroll scored the services of Alex Gibbs, Sims tenure in Seattle was nearing its end. It's not that Sims is horribly mismatched in a zone blocking scheme, but he was always a proxy fit, and the purer the strain, the lesser the fit. His footwork has progressed enough that he can move, mostly forward, and trap block. Gibbs needs better. His awareness has progressed enough that he can slide off one man and onto another, but not always and not reliably. Gibbs needs better.

Sims overcame a lot to become the quality guard he is. His strength, size and discipline make him an excellent pass blocker. He moves well enough now to be a good run blocker in the right system. Sims is young, cheap, mostly healthy, a match for most blocking schemes, from power to hybridized zone blocking schemes, but he is not fit for a pure zone blocking scheme, and when you hire the creator, purity is a given.

Seattle set a lowball tender for Sims, perhaps to facilitate trading. It is very unlikely Seattle recoups what it will lose. Sims is much more valuable than a typical fourth round pick, and a fourth round pick might be generous. Like a lot things done this offseason, losing Sims, when Seattle does, will be in the name of a big picture improvement. I am not fond of selling low on talent or piecing apart Seattle's young core, but Gibbs has worked wonders. If he can fill out an offensive line with his players and make it work, trading Sims will seem like a necessary evil on the road to a better offense.