Seattle sets three wide, tight end, shotgun with Justin Forsett to Hasselbeck's right. St. Louis sets in a 4-2 nickel with man coverage on the outside. Before the snap, Houshmandzadeh motions in to behind the center and then back out to the left slot. Nickelback Jonathan Wade does not show man cover. Then things get complicated. 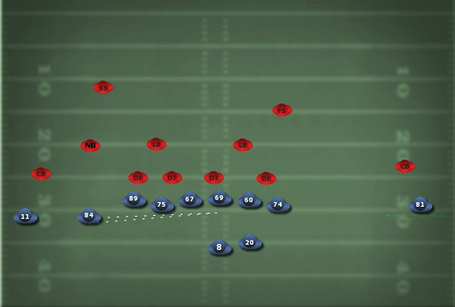 St. Louis rushes three, but Will Witherspoon is ready to delay blitz if necessary. The corners are up to jam. Ron Bartell jams Nate Burleson on the right and Justin King attempts to jam Butler on the left. Right defensive tackle Clifton Ryan drops into cover and along with Jonathan Wade, the two blanket T.J. Houshmandzadeh. Housh is running a quick in that doubles as a pick to free John Carlson. It does, but it doesn't. Carlson is covered by James Laurinaitis. Houshmandzadeh gives Carlson separation, but the Rams have strong safety James Butler playing over top ready to double team.

Burleson hasn't escaped Bartell. Witherspoon stops his blitz when he sees Forsett leaking into the right flat. He doesn't pursue Forsett, but looms. A pass to Forsett is sure to be tackled short. Hasselbeck can't scramble with Witherspoon so close. Carlson and Houshmandzadeh are double teamed. That leaves King the small task of jamming Butler to break the play and likely force a throw away. 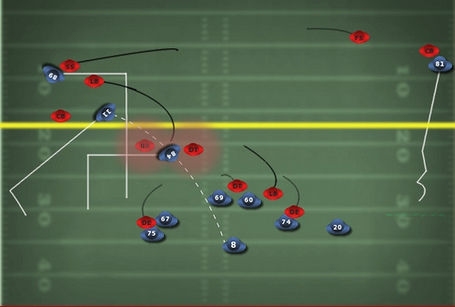 But he doesn't. Butler takes two choppy steps up and left. The move forces King's hips open as he attempts to get inside position and a chance to jam Butler out of bounds. Butler raises his right arm and takes a long, low, almost kneeling step with his left leg. King bites on the motion and begins sidestepping to shadow. Butler torques his waist and swats King's left shoulder pad, knocking him towards the sideline and helping Butler drive into a hard slant right. He's wide open and Matt knows it.

Hasselbeck finds Butler for seven and the first. Deon, I see slants in your future.

Seattle was driving with a mix of quick hitters and zone splitters. The 49ers front four couldn't pressure in time, and man and zone coverage had failed. Mike Singletary ordered a stampede. A stampede formation involves no down linemen. The front seven mills around like cattle. The goal is to confuse offensive line assignments and disguise the blitz. It's a solid formation, rather avant-garde for the NFL, but can't overcome the seven man blitz. Deon Butler was single covered on the outside left and Shawntae Spencer too concerned about being beat deep to react to Butler's short curl. Such is the power of speed. Such is the power of complimentary play calls. Such is the impotence of the seven-man blitz.

Joe Nedney kicks a 39 yard field goal on the 16th play of the 49ers drive. The drive has monopolized the quarter and reduced Seattle's chances of winning to 3%. In a move of panic, Deon Butler took a kick return out of the end zone, ran for 16 yards and pinned Seattle back at its 12. Butler showed no ability to return in the preseason. He should not have been out there.

Accounting for targets, passes to Butler were cripplingly unproductive. Only 36% percent of passes targeting Butler were completed. Despite his role as a deep threat, Butler only averaged 11.7 yards per reception. His 32-yard reception against San Francisco was his lone reception for 20 or more yards. He also didn't develop as a return man. And, more than likely, has no future whatsoever returning kicks or punts.

Butler probably has a future with the team. It's possible he could be squeezed out, but he's cheap and young and still very fast. The problem is, Butler is not a position receiver and he doesn't run sound deep routes. He runs solid short routes but coaches are, appropriately or not, worried about sending him over the middle.

Route running wasn't the problem for Butler. His role within Greg Knapp's offense, as a decoy as much as anything, accounts for much of his negative DVOA. Knapp sent receivers deep but Hasselbeck couldn't reach them. That is not the receiver's fault.

If I had been more optimistic about Butler as a prospect, I would be more optimistic about Butler as a player, but though his 2009 doesn't change my impression of Butler, my impression was never very sunny. He turned 24 in January and so even as a second-year player, age is working against him. If Seattle had not drafted Golden Tate, Butler could perhaps compete against Deion Branch for the Eddie Royal position in Jeremy Bates offense. And maybe he still can, but as his return skills suggest, Butler is not very deadly in the open field.

Most likely though, Bates will use Butler as Knapp used Butler, as a situational deep threat. Legitimate 4.38 speed is fast even by NFL standards and Butler can get behind the safety in a flash. Unlike Hasselbeck, Charlie Whitehurst can make that mean something. Step one for Butler is to compete hard enough and perform well enough to make the team.