Share All sharing options for: 2009 Season Retrospective: Will Herring

Lance Laury shoved David Roach aside and speared the football from Donnie Avery's grasp. The ball caromed to Will Herring and he fell on it for an easy recovery. It was all easy. Seahawks recover on the St. Louis 19.  Without hardly an effort, their win probability shot up to 65%.

3. Will Herring shot the gap and shot past Steven Jackson. Seattle swarmed and finished the tackle, but Herring needs to learn when to slow down and square before lunging at the ball carrier. Thankfully, Lawrence Jackson was there to contain and slow Jackson and Darryl Tapp streaking from the opposite end to tackle him.

3. At the snap, Curry and Will Herring read run and rush the line to control their gaps. Every 49er but Josh Hill stays in to block. Ken Lucas stays with Hill.

6. Herring is lost in the pile. For good measure and without a better assignment, Heitmann piles on, tracking him into the scrum and shoving to the ground. Staley pulls out and blocks David Hawthorne.

29. Staying uncharacteristic, Herring blew coverage on the next play.

28. He dropped and that allowed Forte to come free underneath.

He dropped into coverage again on the second play of the Jaguars second drive. It was a fun looking blitz that failed miserably. Tapp and opposing end Jackson dropped into curl zones, and Seattle's three linebackers attempted a complex, layered blitz. It snagged when Will Herring couldn't power through the pile and pressure Garrard. In fact, he fell. It's one those moments you miss Leroy Hill. Jackson tackled Holt from behind 25-yards down the field. I'll talk Jackson at some point, but he is an excellent athlete and his progress as a pass rusher is exciting. Very exciting.

31. Will Herring looped around two lead blockers to get a glancing blow low on Forte.

30. It worked and Seattle's backup backers dropped Forte for a loss of two.

The first play is a run stuff in the first drive of the first quarter.

Indianapolis led the NFL in single back sets. It ran 62%* of the time when it aligned with two tight ends and a single back, third in the NFL. The Colts run stretch plays and this play was a stretch right by the Bears. 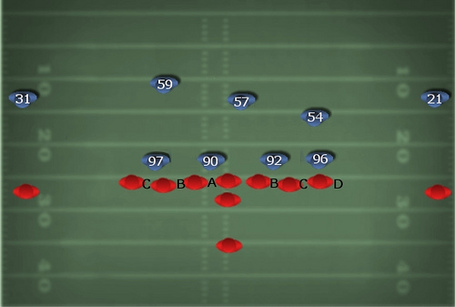 Indianapolis will move its offensive line right. It wants to create a run lane where Seattle is weakest. That is the right "A" gap, controlled by a linebacker, the outside right and the cutback lane, the left "D" gap. The center is able to pull into the second level. 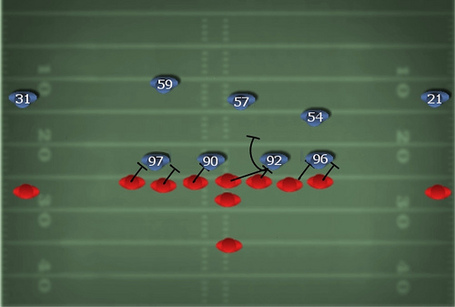 Ken Lucas reads run and sprints down to contain the left "D" gap. Will Herring raps around right end and contains the right "D" gap. Hawthorne hits the center in the hole and stops his lead block. Forte picks the right "A" gap. Curry has a direct line to Forte and tackles him after three. 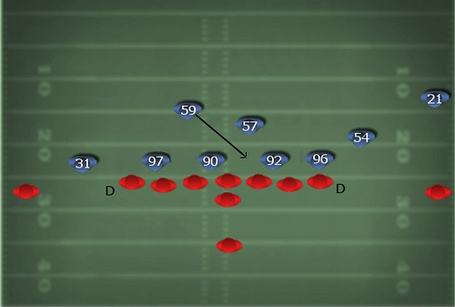 Every formation, every down, is a potential run, and Chris Johnson's quest for the record is keeping Seattle in the game.

Titans set two wide, tight end (right), offset I (left). The left wide receiver is playing tight, essentially in the slot. Seattle is in a 4-3 over, with weakside linebacker Will Herring just outside one-tech Colin Cole's right shoulder.

The offensive line moves hard right. Seattle pursues. It creates a sizable cutback lane left. Herring rushes forward and is nearly lost in the pile. Johnson runs a lightning bolt shape off tackle and is building speed towards the third level. Kelly Jennings closes from the left. Herring closes from the right, has a bad angle, puts a glancing hit on Johnson, but ever so subtly, grips and rips the point of the ball and sends the pigskin flying forward away from Johnson and right to Deon Grant. From a fundamentals standpoint, that's a bad angle made good with a fluke strip. From a game state standpoint, that's a dangerous looking run turned into a turnover. Seattle's win probability jumps to 62%.

Outlook: I'm a pretty big Will Herring fan. He has some obvious limitations as a run stopper. His instincts close to the line are a bit undeveloped and he tends to react to first action and take himself out of position. That's bad, because he's slight and if he misreads, he has a heck of a time working through the pile to get back into the play. Mostly, he doesn't. He doesn't work through trash, he doesn't blitz gaps and he doesn't shed blockers.

He's a nimble and active coverage linebacker that squares in space and is an able open-field tackler. Herring has enough value as a three-down player that he serves as quality depth, but his true value is found in his ability as a nickel linebacker. When the play is probably a pass, I'd take Herring on the field over David Hawthorne or Leroy Hill. He reads well, reacts well, has good hands and excellent agility.

Hawthorne and Hill will battle it out for starting weakside linebacker. Whoever wins the spot, and it's likely to be Hawthorne, but don't discount Hill's starter inertia or contract, it would be heartening to see Herring still see some snaps. He's more of a specialist, but not so weak against the run as to be a liability, and strong enough in coverage to be an asset on passing downs.