This play is a good example of Willis' ability and how much the coaches trust him. Wallace runs a designed rollout right with only Willis pulling out right to defend him. It's third and seventeen, so the Colts drop a billion and evidently no one was open, because Wallace sacked himself in shame.

Ray Willis sleepwalked through the first quarter. What more could he do? He wasn't challenged, protected or counted on. He was invisible -- in a good way.

Seattle is set three wide, two tight ends. The right wide out is Justin Forsett. He motions to running back before the snap. The play starts like a stretch left, but it's not. It's an elegant cutback right that should have scored. 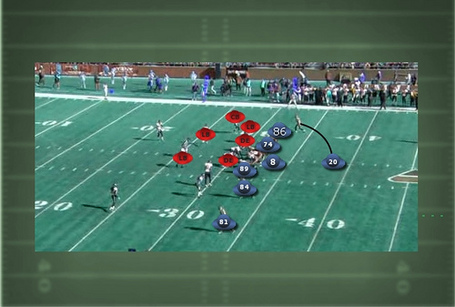 I highlighted the principle players. The wide receivers are important decoys. After Forsett motions in, cornerback Derek Cox moves into the tackle box, over but to the right of Forsett. At the snap, Seattle moves its line hard left. That action lures both inside linebackers into the pile. John Owens (86) runs past left outside linebacker Daryl Smith. Smith pursues Hasselbeck on Matt Hasselbeck's boot motion and takes himself out of the play. John Carlson is matched against right defensive end Derrick Harvey. That's a tough matchup, but one he must and does win. 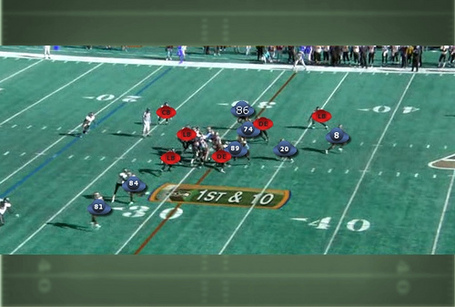 The trap is sprung when Willis stops his pull right and circles back to block left defensive end John Henderson. All of a sudden, Forsett has a wide open cutback lane (the triangle beginning between 89 and 74 and extending towards the end zone), a cornerback to beat and Owens to block in front.

Forsett times his cut poorly and runs up on Carlson's legs. Carlson could have blocked Harvey better, but not much better. He eventually pancakes Harvey. Forsett's initial hole is not gaping, it's a cutback lane after all, but it's clear and large enough for any rusher to explode through with a head of steam. Instead he stumbles and the defense swarms around him. He gains two, but if he gets through that hole cleanly, he should have no problem taking it to the house. One only needs to see how empty the right side of the field is to see the brilliance of this play call and how close it was to a touchdown.

He walked almost untouched into the end zone. It was zone blocking at its best. The play turned on three factors: the line call, John Carlson's ability to contain the end and Ray Willis' ability to dominate a linebacker. The line call directed Willis to pull straight ahead and engage and shove the Cardinals inside linebacker towards the right sideline. Carlson took on the end and held him long enough for Force to hit and run through the hole. Justin Griffith hit the hole and punished the defender's overpursuit, blocking the left outside linebacker right and extending the hole. From there Forsett was able to run north-south and behind Willis into the end zone.

Corner blitz, drop the end in coverage, watch it fail, watch the end commit a personal foul, and move on. That's the life of a rookie coach. Seattle then ran a stretch right. Ray Willis couldn't control tackle Gary Gibson, and Gibson slowed Jones enough that when he broke Gibson's tackle, the defense had regrouped and plugged the middle. James Laurinaitis tackled Jones after four.

The Bears blitzed five times in the first quarter. Seattle's offensive line was steady with few exceptions. Ray Willis was beat around the edge once, and on another play the defensive end took him deep into the pocket. Seneca Wallace refused to step up in the pocket and instead scrambled left.

49. No one struggled more than Ray Willis.

48. Willis spent much of the quarter crouching, watching his man chase Seneca Wallace.

Freeney schooled Frye with an inside spin move, but it was Mathis firing around edge that forced the throwaway towards Burleson. Willis allowed the kind of instant pressure that deactivates a pass game.

Seattle then ran, and as before, details stopped the start of a good play. Ray Willis dropped as if to pass block, and when James attempted to run behind right guard, Willis wasn't in position to maintain the hole. Willis needed to drive block and instead sagged as if to shadow.

Schmitt and Julius Jones have developed some chemistry, or so it looked. Schmitt ran in front and Jones followed and the two seemed to see the same hole on all but one run play. Schmitt turned a right-angle left just behind the offensive line and continued off-tackle, but Jones cut in and was tackled by the left defensive end. Ray Willis had attempted a cut block, but Derrick Harvey anticipated it and stayed in play.

Outlook: Ray Willis is a quintessential right tackle: cheap, healthy and good enough. He doesn't lock down ends, he isn't a road grader, per se, but for the football equivalent of a pittance, he gave Seattle 16 starts and was alternately good and forgettable. Willis wasn't a great fit for Greg Knapp's offense and he isn't a great fit for Alex Gibbs' run game, and the addition of Russell Okung likely sends Sean Locklear back to right tackle and Willis back to the bench.

It might not last. Gibbs has a strict player profile and among his requirements is health. Locklear is oft-injured and trending worse. He is also relatively expensive. Willis may not be an ideal fit for a zone blocking scheme, but he isn't lost or a liability. The two players could duke it out in the preseason with only the winner making the team. More likely, Locklear will start as long as he's healthy and Willis will substitute whenever he eventually isn't.

That ain't so bad. He should be a steady, occasionally clumsy, occasionally overpowering presence, serve out his bargain contract and then find a new home in 2011.