Raye then attacked Seattle's center, but this time Seattle stopped him. Red Bryant gave David Baas a hard push off the snap and Baas recoiled clear into Norris. Frank Gore adjusted, but the disruption made the route too long to the hole and unblocked Cory Redding closed from the left and tackled Gore after a gain of one.

Seattle overloads the right and Curry comes free around right end forcing Tony Romo up into the pocket. Seattle struggled with getting edge rush but failing to establish interior pressure, but this time Red Bryant plows through the right guard and forces an incomplete pass. Babineaux can be seen covering Jason Witten streaking up the right hash mark. However Seattle did it, the Seahawks shut down Witten. 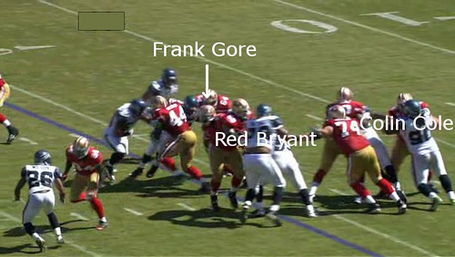 One Seahawk did his job, and Lawrence Jackson wasn't enough. Jackson was alone on the right, knocking back pulling left guard David Baas, chipping and disrupting fullback Moran Norris and narrowing Gore's hole to a sliver. The linebackers over-pursued and were out of position. Colin Cole was miles in the backfield after completely misreading the play. Red Bryant pursued hard left and abandoned his gap. Putting eight in the box left Seattle's defense thinned out and two dimensional. When Gore exploded out of the hole, he had only Jordan Babineaux to beat. Babineaux took a bad angle, but Gore does this. Give him a clean release into the second level and one to beat and Gore will. Babineaux was "posterized" so to speak, but he bears less blame than all but Deon Grant, Darryl Tapp, Josh Wilson, Ken Lucas and Jackson. The linebackers and line detonated Seattle's rush defense.

Outlook: Most of what I think about Bryant at end is covered below. One fact I haven't addressed but deserves attention: Dropping Bryant out of the defensive tackle rotation strengthens Colin Cole's hold on the starting one-tech and removes one of Seattle's best interior pass rushers. Bryant is not skilled or particularly good, but compared to Cole, Bryant is a pocket-collapsing demon. Week 2 was Bryant's big audition and he flunked out. I cringe when people attempt to apply sample size concepts from baseball to football, but it should be common sense that struggling in one, two or even six games does not damn a promising young player.

I want the kid to succeed. I can squint and pretend and talk myself into Bryant succeeding at end. But for him to truly succeed, it will take creative coaching. It's not inherently bad to play a tackle at end, but if you're going to punt that kind of pass rush for power, presence and run stopping ability, the rush needs to come from somewhere else. The true key to Bryant succeeding at end might be his interaction with Aaron Curry.