Rooting for the Bad Guys

Share All sharing options for: Rooting for the Bad Guys

This is a Seahawks blog, but it's safe to say most of you readers have other rooting interests in various sports. At least a plurality, if not a majority of you, root for other Seattle-area or Pacific-Northwestern teams. This weekend Safeco Field will be overrun by Red Sox loyalists, which will trigger the usual tsunami of complaints about "bandwagon" and "fair weather" carpet-bagging fans.

Since my first trip to a Mariners' game at the Dome in 1990, I've been one of those carpet-baggers. Yup. I'm a Washingtonian born-and-bred, and I'm also a proud member of Red Sox Nation. Almost every year, I make a trip to Seattle and root for the bad guys... 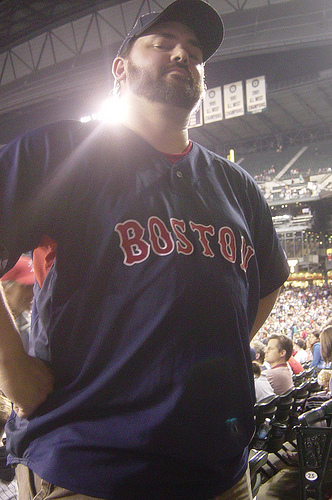 The story of how I became a Seahawks fan is pretty simple: I was caught up in the enthusiasm of the incredible 1983 season, where at age 8 I went to my first game and was hooked for life.

The Red Sox thing? It came a bit later on. I grew up in the Tri-Cities, and I barely knew ANY actually Mariners fans (no big shock there.. back then the M's were atrocious).. My friends would argue constantly about individual players, though. The big one was Roger Clemens v. Dwight Gooden. In 1986, I loved The Rocket (for obvious reasons I detest him now), and when the Red Sox also happened to have a great season, I was hooked. I'd love to tell you I was tortured about the '86 series, but frankly at age 11 I was pretty sure they'd just win it all the next season (I wasn't the most realistic kid). Being a bookish little nerd of a sports fan, I devoured the sordid history of the Red Sox, and was enchanted by Fenway and the lore surrounding the Boston nine.

As early as '86 I have pictures of me with what would become my uniform: Red Sox hat, Seahawks jersey/sweatshirt/t-shirt. In the early 90s I started going to games at the Kingdome.. but instead of rooting for the M's, I was there in all my Red Sox gear. I realized something: It was kind of fun to be the villain (which inspired me to start going to Seahawks road games as well)... I started college at Western in 1993, and catching a Sox game in Seattle became an annual tradition (one that got my dorm room in Fairhaven TP'd while I was at a game more than once).

In 1995 I was surrounded by Mariners fever, and I'll admit to pulling for them unless the M's success screwed up things for my Red Sox (usually, the M's winning tends to help out Boston). But it was strange to be the only guy pissed off because the idiots running MLB started regional playoff coverage on TV that season... While the M's and Yankees battled on TV, I couldn't watch the Red Sox get pounded into dust by Cleveland (maybe that was a good thing).

Since then I've been to Fenway twice, and also seen games at Safeco, the Cell, Coors Field, Great American Ballpark, Jacobs Field and Comerica Park. My love of the Sox has never eclipsed my love of the Seahawks, but I have to admit the Red Stockings helped make the Behring Dark Ages of the 1990s more tolerable by making playoff runs in 1990, 1995, 1998 and 1999. I cherish the World Championship years of 2004 and 2007, but I'd trade them both in an instant for a Lombardi Trophy sitting in the lobby of the VMAC.

In an indirect way, I find the Red Sox inspiring as a Seahawks fan... For DECADES they couldn't get over the hump, but now here they sit with two World Championships in recent years... To borrow the catch phrase from the 2004 Red Sox and apply it to the Seahawks: Why Not Us?

The assumption that all the Red Sox fans at Safeco this weekend are bandwagon douchenozzles really irks me, because I know for a fact that PLENTY of them are life-long Sox fans, who are also from the Northwest. But I'd like to say a little bit in defense of even those newbie, bandwagon fans...

Aren't bandwagon fans something we should hope the Seahawks start attracting again? Us loyalist types will ALWAYS have to deal with bandwagoners if/when our teams are successful. If you were at any Seahawks road games from 2003-2007, you probably noticed a lot more Seattle fans in attendance than you would have in say, 1998 or 2009.

Is this a bad thing? They're not all flying in from Seattle. Would we rather Seahawks merchandise molder on the shelves nationwide? And how do you really tell the difference between a new fan who is going to grow into a loyal, knowledgable passionate Twelve and a "bandwagoner?" Do you administer a quiz?

Here's the other thing... Didn't most of us, at some point, latch onto the Seahawks during a successful, or at least memorable, season? I'm betting most Twelves can point to years like 1983, 1988, 1999 or 2005 as the catalyst for their Seahawks loyalties. What if the Seahawks have a great 2010 season and attract a bunch of new fans? If they fade off to another team over time, yeah, they're poesurs... But what if that grows into lasting, rabid fandom?

Which leads to the whole "at least x is from blank" argument. If you really believe that, do you reject Seahawks fans who, maybe, fell in love after seeing that game against NYG in 2005 but are from Portland, Maine rather than Portland, Oregon? Maybe that same person gets the cash together to come out to Qwest this year, buys a Golden Tate jersey, and screams his lungs out for three hours. Do you not want THAT guy in the fold? I'll take him over some Bellevue suburbanite who tells me to sit down during an NFL game (that really happened).

There's lots of reasons people form a life-long attachment to a pro sports team. Geographical proximity, by itself, is a pretty weak reason to root for a team in my book. If you love a team, your story had better be deeper than "they happened to be on TV where I live."

So what's your story? Who's with me on this? Violently opposed? Do you just root for Seattle teams, or do you root for teams from all over? I think I might have turned out differently if I had grown up IN Seattle instead of 3 hours away in Eastern WA, but we'll never know.