Up until now, and going forward, I have spotlighted signature plays. NFL offenses are not terribly different when it comes to common plays and so I think it's more interesting to show off some of the creative plays that Jeremy Bates uses to deceive and create mismatches. An offense is not built from signature plays though. Even though Bates is a creative play designer, like all offensive coordinators in the NFL, on most downs, he uses the kind of bread and butter plays you'll find in most playbooks. To give a feel for a few of the more common basic plays in Bates' playbook, I created a simple graphic below that shows three different plays from more-or-less the same formation: Four wide receivers, running back, shotgun. 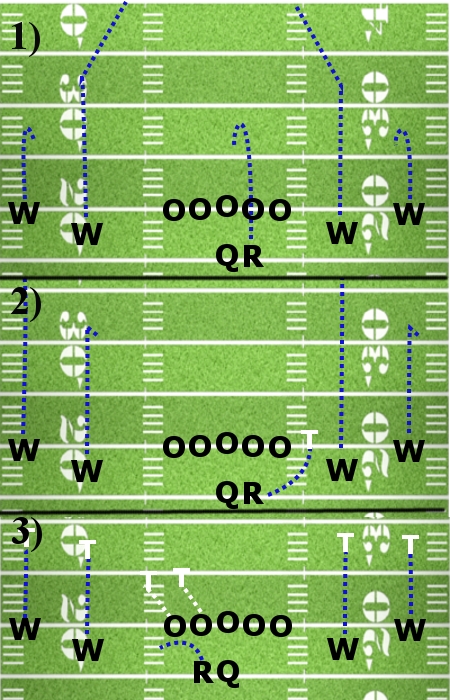 The deep routes are truncated on the second play, because I believe they are variable. The basic premise is a high-low attack. A football field is both wide and long, and Bates attacks both dimensions.

Matt Hasselbeck was a shell of himself last year. We can assume it was not representational of his ability, though whatever that ability is, it's been a while since we've seen it. If he wants to retain his position as starter through the season, he will need to prove capable of completing deep passes.