Re-watching this reminds me how bleak this game felt following this drive. Seattle was battered back the length of the football field and survived because of poor execution by the 49ers. A lot of players had poor drives, Brandon Mebane particularly. I have never seen Brandon spend so much time on the turf.

Aaron Curry holds the edge against Delanie Walker and forces Frank Gore to cut farther and farther towards the right sideline. Lofa Tatupu draws the block of replacement right guard Tony Wragge. Earl Thomas sprints from the second level and drops a shoulder under and around Anthony Davis to catch Gore for a loss of four.

San Francisco sets two receivers (left), two tight ends (right), but Walker motions to left fullback before the snap. Marcus Trufant follows, so that he's playing over Walker on the left. This is where things start to break down.

Dexter Davis overpursues and runs himself out of the play. Brandon Mebane is knocked onto one knee. Alex Smith motions play action. Walker cuts behind the line of scrimmage right, and that draws Trufant, Tatupu and briefly Jordan Babineaux. The receivers run off cover on the left, leaving the left flat unmanned but by Will Herring. Herring is outnumbered and overmatched and does not factor but to draw a blocker.

Gore angles himself towards the left sideline and eventually out of bounds.

I wonder if Michael Crabtree is this skittish in games away from Qwest?

Jennings is opposite Crabtree. Crabtree slants in and establishes inside position and a step on Jennings. Then he stops. From the right, but still relatively far off, David Hawthorne is closing. Crabtree stops and reaches high and to his left, just about where he was supposed to run. Jennings slaps it through his hands. Hawthorne very nearly picks the deflection. Crabtree owns this incomplete pass.

I used to think "tackle" was a crappy stat. More and more, I think it's utter nonsense.

Here's a good example. Red Bryant and Earl Thomas are awarded the tackle. 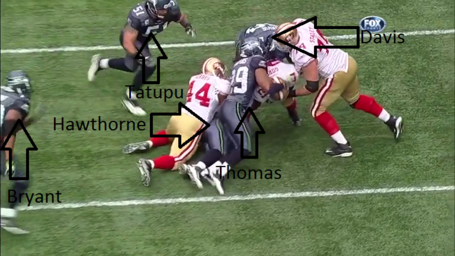 Thomas played a part and deserves an assist. Bryant ran from the left and jumped on the pile. Neither did anything crucial to stop this play. Here's who did.

Cole and Mebane are crushed, setting up a big hole on the left. David Hawthorne powers into Moran Norris and narrows the hole considerably. Tatupu shoots the gap off Norris's right shoulder. Gore attempts to evade by bouncing outside. Tatupu falls attempting the tackle. Davis works through to Staley's outside shoulder, closes Gore's lane to the outside and then tackles Gore, before Thomas, Hawthorne, Tatupu, Trufant and, eventually, Bryant pile on.

Chris Clemons is back in. He screws up. Tatupu does his best to fill the throwing lane. His best shouldn't be enough.

Smith weakly fakes play action. Clemons comes unblocked and attempts to tackle Gore, but runs himself into a cut block instead. Tatupu smells trouble and screams over and jumps into Smith's throwing lane. Smith panic-adjusts, lofts the ball way too high and misses a wide open Norris in the end zone.

Breaks by the dozen can not be expected in every game.