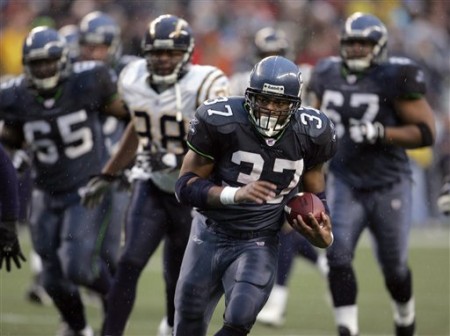 Yeah, it's a bit early to be posting this, but I figured the entire Twelve Army needed a boost after Sunday's game. So here's our nine most memorable wins over the San Diego Chargers (who are the only old AFC West foe Seattle has a winning all-time record against at 25-23), joined by one close loss that was more or less a win.

It's hard to really get a good lather of hatred going for the Chargers; Since the early 80s we've dominated the series against them, and we never really battled them for division titles or wild card spots. The Broncos and Raiders usually stood between us and playoff success back in the 80s, the Chiefs dominated us at Arrowhead for decades... But the Chargers? They were just sorta there. Meh.

Why is a loss on this list? The Seahawks came into this one on a two-game skid, losing at Arizona and completely pooping their pantaloons against the Niners at home on NFL Network (the performance and the weather were both so putrid NFLN hasn't scheduled us since). The mighty 12-2 Chargers were coming to Qwest, and while a loss wouldn't knock Seattle out of the playoff hunt, another home blowout loss would have psychologically killed the reeling Hawks.

Thankfully, the Seahawks showed some moxie and took a 17-13 lead late into the 4th, buttressed by one of the last great games of Shaun Alexander's career (140 yards on 31 carries with 2 TDs). Late in the game word spread: The Cardinals had beaten the 49ers, and the NFC West title was Seattle's once again. Rivers hit Jackson late to spoil some of those good vibes, but the Hawks would take the regular season finale at Tampa before what we all know now as "The Romo Game." The salvaging of the 2006 season started in this loss to the Chargers.

This was part of the magical 5-game winning streak that ended the 1986 season. Dave Krieg out-dueled future Hall-of-Famer Dan Fouts, going 15-21 for 305 yards, with 4 TDs and zero picks. Largent snagged two touchdowns and a post-ACL-tear Curt Warner ground out 93 yards rushing. Side note: For almost the entire decade of the 1980s, the Seahawks OWNED the Chargers, going 12-2 against them from 1981-1989.

This was the first win I attended as a Seahawks season ticket holder, and it was a dramatic one. The Hawks fell behind 13-3 early, but Warren Moon hit Mack Strong for a short touchdown and Galloway for a 53-yarder in the 4th. A late Steve Broussard TD sealed the win, and I went home happy after two embarrassing losses to start my days as a season ticket holder.

Remember how I said the Hawks dominated the Bolts in the '80s? Well, SD won 10 out of the first 13 meetings in the 1990s until this satisfying 1996 pounding. Chris Warren ran for 146 yards and a TD, and Darryl Williams ran a pick back 79 yards for another score. This one was a rare moment of joy in a dreary 7-9 campaign.

This was a fun one- The Chargers came in 8-1 with dreams about hosting XXII in their home stadium. After this severe ass-blasting they'd go on to end the season with six straight losses, out of the playoffs at 8-7. Curt Warner, John L. Williams and Steve Largent all scored, and Fredd Young notched two sacks in this season-killing win.

On MNF, The Hawks shut out SD at Jack Murphy Stadium, powered by Krieg's three TD strikes to Steve Largent. This game was the start of a 4-game stretch that saw Seattle's defense allow only 20 total points. Perhaps the Chargers were still bummed about the Padres getting wiped out in the '84 World Series?

Another MNF tilt, and the first Seattle win over Dan Fouts and the mighty Chargers. Even if you don't remember the game (I don't), you've probably seen Dan Doornink's electrifying 80-yard TD scamper on some NFL Films highlight reel. Sure, the Chargers would go on to win the greatest game ever played, and the Hawks would meekly finish 6-10, but the 0-8 streak v. Air Coryell was over.

Both QBs had RIDICULOUS stat lines in this one...

Speedster Daryl Turner? He just had 7 catches for 121 yards and FOUR TDs!

That's not an NFL game... That's Madden on the rookie setting.

The Hawks were still fighting for thier playoff lives in the penultimate game of the 2001 season, and it looked like they were about to blow a late lead. SD tied the game with seconds left, and OT looked like a lock.

I was home visiting the Tri-Cites, watching the game on TV with my family. The rest of you may have had a similar experience screaming this during the ensuing kickoff...

CR's big kickoff return set up Rian Lindell for the 54-yard game winner at the gun. Trent Dilfer fired three TDs in probably his best performance in a Seahawks uni, with two of those being snagged by D-Jack.

This might have been the best game of Matt Hasselbeck's career. 449 yards passing, a comeback from a 28-14 4th quarter deficit to win in OT, and he popped up and got right in Rodney Harrison's face after a late/dirty hit. This was the real beginning of the Hasselbeck era in Seattle. We all know that epoch is ending, but how about at least one more torching of the Chargers from Beck this Sunday?