The Seahawks win probability peaked at 92% before Earl Thomas's fourth quarter interception pushed it to 99%. That peak occurred after Leon Washington's 101 yard touchdown return and at the start of the Chargers first series. San Diego rallied to 45% in the fourth quarter when they tied with a touchdown and a two-point conversion, but Washington returned the ensuing kickoff for a touchdown. I can't remember a game in recent memory that involved so much hanging on and so little offense. 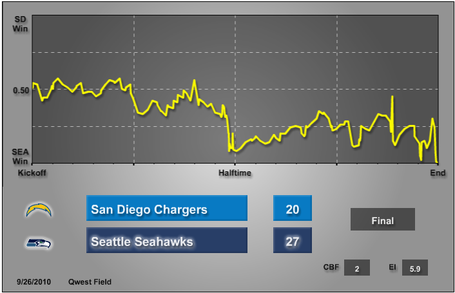