Stacy Andrews is a bit sloppy, but big. Very big.

Not every position on the football field favors size. I would argue that for a player like DeSean Jackson his scrawny frame and ability to clown defensive backs in the open field go hand in hand. Justin Forsett excels at ducking under tackles and slicing through holes that a larger back would be stuck behind.

Trench warfare definitely favors larger players. It's not just the initial surge or the ability to sustain. It's that a larger blocker blocks a larger space, and though no one would confuse Andrews ability to pull block, ability to work through space and square his block and strike a defender in the open field with that of Max Unger, in a lot of ways, Andrews is actually a better pull blocker. Because Unger spurts out like a fire hose while Andrews surges like a tsunami.

Six and a first is plenty successful for a rush attempt on third and two, but this was another play in which the execution trumped the outcome. 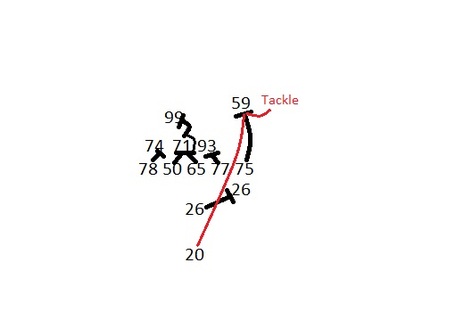 Seahawks: WR (left/right), TE (right), I-backs. Deion Branch motions from the right to behind left tackle. As far as I can tell, this is to draw Quentin Jammer inside the tackle box and clear the right flat, and not because Branch is such a punishing blocker.

Chargers: 3-4, with the nose shaded left and the left defensive end almost over center.

Step 1: Tearing out the center

Chris Spencer and Ben Hamilton double Antonio Garay and push him back two yards. This isn't an easy block, becase like I said, Garay isn't playing a true nose. He's left of center and Spencer, the principle blocker, must angle block.

Sean Locklear pulls into the second level and blocks Brandyn Siler. He eventually loses the block and Siler tackles. Michael Robinson strikes strong safety Steve Gregory and turns him so that his back faces the right sideline.

Forsett hits the hole, converts the first and is tackled attempting to angle right.