The Most Exciting Tape I Have Ever Watched, Part One: King Laserface Dirties His Drawers

Share All sharing options for: The Most Exciting Tape I Have Ever Watched, Part One: King Laserface Dirties His Drawers

This will set me behind some, but I have a lot more time tomorrow, so screw it.

Following the Matt Hasselbeck interception, a pass that was so underthrown Mike Williams became not just the defender, but a hopelessly out of position defender, Seattle manned up in a way I have never seen before.

I don't know if this is a turning point in Gus Bradley's development as a defensive coordinator. The guy was a rookie last season. Or if Seattle replaced Bradley with a think tank of the greatest defensive minds ever born, or, if maybe even, someone else was at work, Pete Carroll or Dan Quinn, but after 18 games of watching vanilla coverages and perfunctory, uninspired blitzes, the Seahawks unleashed a series of attacks that would make Steelers fans weep in envy.

My favorite blitz I have ever had the honor to diagram. 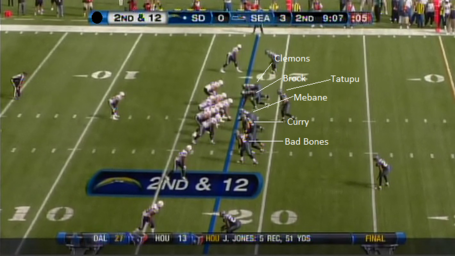 Everything about this play was creative.

Brandon Mebane starts over nose but Lofa Tatupu adjusts him over the right "A" gap.

Seattle has five on the line and Tatupu a yard back, three in man coverage and Lawyer Milloy in cover one over top. Ok, that's not ideal but sacrifices must be made. 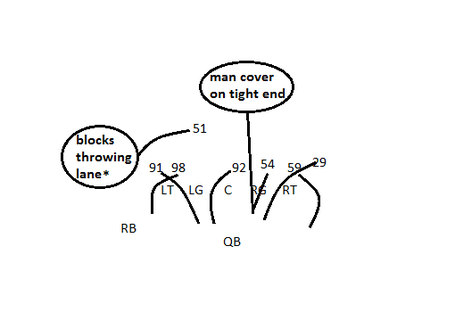 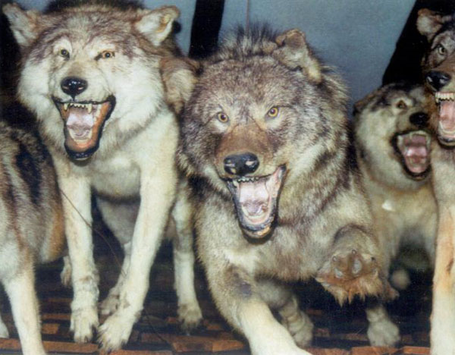 *Tatupu is shadowing Tolbert, but has the presence of mind to jump and shield Rivers throwing lane.

In words, this is how it works:

Step One: Blitzers real and imagined

Raheem Brock attacks wide left and Chris Clemons loops around and attacks in. Lofa Tatupu attacks left but shadows wide and contains Tolbert. Brandon Mebane starts opposite the right "A" gap and attacks left into the left "A" gap. Will Herring runs into the right "A" gap but fades away and into man coverage on tight end Kris Wilson. Aaron Curry and Earl Thomas attack off the right end. Seattle only commits five blitzers, but it feels like seven.

From all the tricks and stunts and wide rushes and inside attacks, one pass rusher comes free. Curry attacks the right edge. Consider: Curry doesn't turn the corner like an All-Pro but he can stretch the edge like a mother. Curry attacks right tackle Jeromey Clary and stretches him wide. Thomas exploits the seam and shoots through and free towards Rivers.

Thomas doesn't hit Rivers. No one hits Rivers, but Rivers, two-time Pro Bowl quarterback in his prime, is freaked the fuck out. He throws a wobbler off his back foot towards Antonio Gates and Gates sort of flails at it.