The Seahawks are 12-10 all-time against the 49ers, including a 10-6 record since Seattle joined the NFC West in 2002. I'll be there at Qwest this Sunday up with the rabble in section 325, and a Seahawks victory would definitely knock one of these five games off this glorious list... Enjoy!

The Niners came in with HFA locked up, and treated this like a glorified preseason game. Despite that, this was still a rousing win. Warren Moon wrapped up his spectacular 1997 Pro Bowl season with four TD passes, including two to Joey Galloway. This was my first season as a Seahawks season ticket holder, so this game has an added bit of personal significance... The Hawks finished '97 at 8-8 (which I'd be very OK with in 2010, frankly).

This was a big early-season ESPN Sunday Night test for the 2003 Seahawks. Even though the Hawks came in 3-1 and SF was 2-3, the Niners were defending division champs and only a year earlier T.O. had humiliated Seattle on MNF with his Sharpie stunt. The boys in blue ran out to a 17-0 lead, which evaporated into a 19-17 4th-quarter deficit. The Twelve Army watched anxiously as Josh Brown booted Seattle to a 20-19 lead with five minutes left, which was immediately followed by a Frisco march down the field.

Thankfully Chad Brown forced a Garrison Hearst fumble in the final minutes, and the Seahawks' march towards the 2003 playoffs continued.

How many times in recent years have we all been told by our social betters in the football press that the glorious revival of the 49ers was jusssssst around the corner? Early in the 2007 season, a trip to Candlestick was supposed to be the changing of the guard. Then this happened:

Yup, I have no problem reveling in Rocky Bernard fucking up Alex Smith's career by smashing his shoulder into meat-flavored goop. More of this on Sunday, boys!

The Niners came into Qwest needing a win to keep their playoff hopes alive against the (frankly sorta pathetic) MoraHawks. Though last season was an unmitigated clusterfuck, this was a spectacularly satisfying win... As I wrote on my own blog last year:

Let me say this clearly: Fuck the Niners. Fuck 'em. For all the bluster and chest-beating and media slobbering over them, these Niners haven't accomplished DICK yet. Nothing. Zilch. 2009 will be ANOTHER season that will end with them in their usual place: sitting at home, watching the playoffs. Once again, with feeling: FUCK the Niners.

All week all we heard about was how Coach Bug Eyes and the big, mean 49ers were going to come into Seattle, pistol whip our players, pillage Pioneer Square and generally lay waste to all things Seahawks. Mr. Commercial Star Mike Singletary would motivate his talented minions to subjugate our poor, defenseless Seahawks on their way to reclaiming what the media sees as the SF birthright: the NFC West title.

The Seahawks decided not to play the victim in this perfectly composed narrative. Of course, it helped that Singletary passed up 3 sure points by arrogantly going for it on 4th and goal early in the game. It also helped that the over-rated Frank Gore killed a Niners scoring drive in the 4th by coughing up the ball, and that Michael Crabtree was scared shitless by a charging Lawyer Milloy on what could have been SF's winning TD in the waning minutes.

The Seahawks went to Candlestick Park for a Saturday afternoon game just after Xmas, needing a win and some help the following day to qualify for the postseason for only the 2nd time since 1988. Seattle entered the game at 9-6, but sported a pathetic 1-6 road record coming into the game. Niners coach Dennis Erickson was hoping for a win to finish the season 8-8 (which was a habit he picked up back in Seattle during the 1990s), and to exact vengeance upon his old employers and the coach who replaced him in Seattle.

The Hawks quickly fell behind 14-0, and lamentations of "same old Seahawks" rang out across the land like church bells. Another winning but playoff-free season loomed.. It was '78, '79, '86, and '90 allll over again... but the Seahawks clawed and gouged back into the game, and then something amazing happened late in the 3rd:

Matt Hasselbeck threw a PERFECT pass to Koren Robinson in the back of the end zone... and K-rob HELD ONTO IT and got both feet in bounds. 21-17 Seahawks. Josh Brown extended the lead to 7, and Shaun Alexander ate up most of the 4th quarter on the ground. The D stopped a last-gasp Niners drive, and Seattle triumphed in a game very few expected them to win (just like this week, huh?)

I was visiting my parents in the Tri-Cities, and caught a flight back to Ohio that night after the game. We got back to Columbus just in time to see the right combination of Sunday results to put the Hawks in the playoffs. Here I am 7 years and about 40 pounds ago: 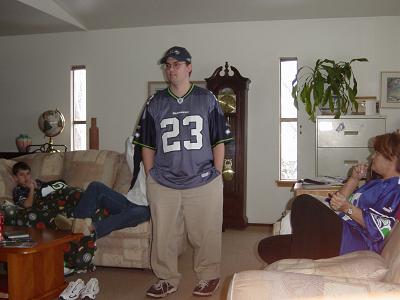