Lofa Tatupu cannot get off blocks. It hurt his draft stock. It qualified his early success. It became the thing Tatupu had to overcome to rank among the best of the best.

And so he did. Or so it seemed.

Lofa Tatupu got bigger, stronger and sacrificed some quickness and possibly some health in the pursuit. The quest for girth culminated in a pectoral tear. I am not speculating a causal relationship between his bulking up and his season ending ruptured pec, but if there wasn't a direct cause and effect, it may have nevertheless signaled the end of oversized Lofa. 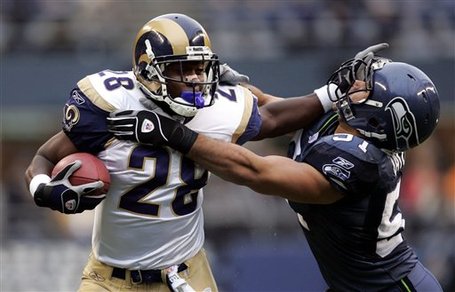 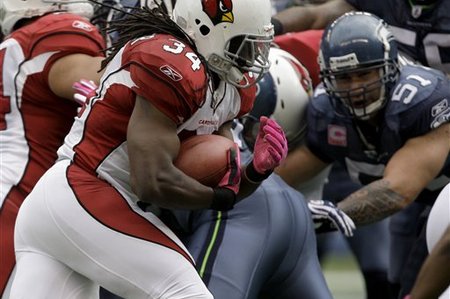 And here's Tatupu in camps: 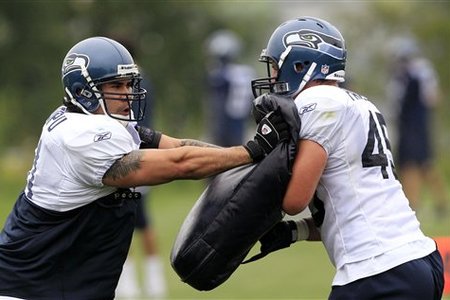 Unfortunately, the first and last are similar while the middle is not. We only have 15 pictures in our assets, and though I looked for similar poses, well, I found two anyway.

Whatever the truth about Tatupu's weight, about how he trains, if he's gained weight because of an effort to gain weight or because of age, or if he's gained weight at all, Seattle needs the younger Tatupu back. It needs the Tatupu that is flexible and quick, that can flash into a throwing lane, and track the ball carrier around the edge. It needs the Tatupu that sometimes struggled with blockers, because that weakness wasn't debilitating or rare, and didn't stop Tatupu from being one of the best young middle linebackers in the NFL. Whatever has changed over the last two seasons, it has diverted that path. Maybe he topped out early. Maybe he was given bad advice.

I know he's heard it a long time. In fact, while researching this I found this blurb from 2005:

It's as sound advice now as it was then. Lofa is quick, smart and ferocious. Who cares if he is a little small. Better small and good than hulking and mediocre.