Enough fluff, let's get down to business.

When an opponent amasses 494 yards of total offense against your team, it can seem like nothing worked. And though the Saints are a top tier offense, that 494 yards represents their season high. So, on the whole, whatever the Seahawks were doing was not working. But week 11's blowout loss to New Orleans is also the closest Seattle has to a blueprint for what will work. It shows us near misses and mistakes to try and avoid. Let's look at one of each.

One big problem Seattle had was defending passing downs. Among early plays, this third and long conversion to Marques Colston was particularly damaging.

It was worth 5% win probability, which is a huge swing for a non-scoring, non-turnover play in the second quarter of a 7-6 game. And, intuitively, it's obvious why. Defenses build around forcing desperate down and distances like third and 13, and yet the Saints were able to convert with relative ease.

How? And how might Seattle try to stop it from happening again this Saturday?

Seattle set up third and long by stuffing Julius Jones for a loss of three and then pressuring Brees into a near interception thrown towards Jimmy Graham. Stuffing the run could be a big part of Seattle upsetting the Saints. The Saints are expected to list nine players as questionable including Pierre Thomas. Chris Ivory has been placed on injured reserve. But turning those stuffs and the resulting passing downs into stops and turnovers is much more important.

Let's look at the incomplete pass that set up third and long before breaking down the break down. 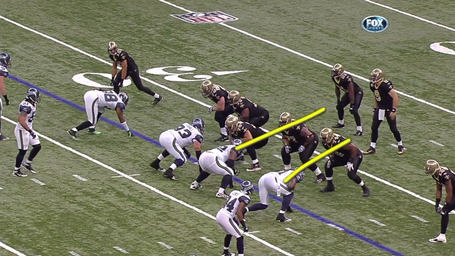 Terrill and Mebane are both playing one-tech. The Saints line decides to double Terrill and that isolates Mebane on left guard Carl Nicks. Nicks does a pretty good job. Mebane is able to work him back, but Nicks stays square in front of Brees.

Brock attacks Stinchcomb wide. Jones attempts to chip Brock before releasing into a flat, but Brock uses his leverage and spins inside. That frees him from Stinchcomb and allows him to fly free from the right. Brees begins to retreat towards his left. Mebane pursues and the lumbering left guard can not keep up.

That leads to this: 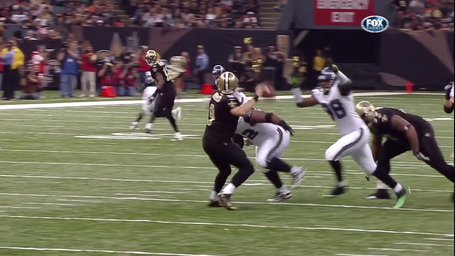 However, Brees does escape and from that near-pick we can see the origin of the coming third down conversion. Seattle has its nickelback matched against Graham. Graham could not catch Brees' pass, but Lewis could not intercept it either. Why was Lewis on the field? Because Marcus Trufant had left with a leg injury and Walter Thurmond was playing in his place.

So, solution one: improve nickel personnel. 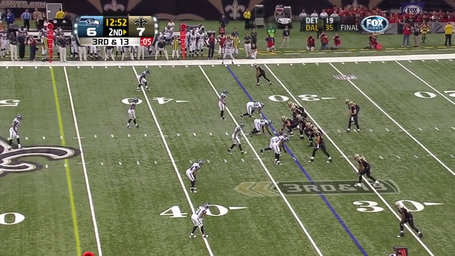 Curry is in at nose. Any of the three down linemen can potentially drop into cover and any one of Tatupu, Jordan Babineaux and Lawyer Milloy can blitz. The major strengths of this formation is the ability to disguise the blitz and the speed on defense. The weaknesses are draws and man coverage. Thomas is shallow. Kam Chancellor is playing centerfield. Lewis is matched against Colston, and you know Brees will look to exploit that.

The Seahawks send four. Milloy blitzes off left end. The blitz breaks down when Clemons takes a looping angle on his stunt. That allows Jahri Evans to reset and stonewall Seattle's most potent pass rusher. The problem isn't execution, actually. Clemons angle is made obtuse by the Saints offensive line. It retreats deep into pass protection, and though Brees starts in shotgun, he continues into a five step drop. That places him nine to ten yards behind the line of scrimmage. 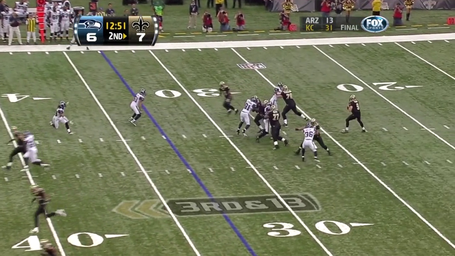 The deep drop neutralizes the pass rush but turns a ~19 yard pass into a 24 yard pass. So there's a trade off. You can see Earl Thomas. He misreads the quarterback's eyes and works to double Jones underneath. Brees is looking Colston the entire way, and if Thomas can break on it, he has a shot on tipping, intercepting or least preventing Brees's target.

Brees steps and fires towards Colston. Lewis has lost Colston on his break. Colston receives for 14 and the first. Lewis cleans up.

So, Seattle's defense breaks down because:

The blitz package does not anticipate Brees's deep drop. Without the element of surprise, the Seahawks four man rush is overmatched. Milloy can not separate from left tackle Jermon Bushrod. Clemons can not separate from right guard Evans. Seattle's most meaningful pressure is supplied by Curry, but Curry is turned and neutralized by center Jonathan Goodwin.

Thomas misreads the play and mistakenly doubles Jones. It's possible Jones could have received and evaded Tatupu and ran for the first, but that's a risk you have to take. Jones is clearly the less threatening option.

Seattle can overcome some of these weaknesses by:

Blitzing the edge rather than the center. Clemons could beat Bushrod with a long edge to Brees. The deep drop makes interior pressure a long shot.

A better read by Thomas.