Following a beautiful pass defense by Walter Thurmond and an incomplete pass to Lance Moore on a quick hitter, the Seahawks had again forced third and long. The resulting conversion would cost Seattle 6% win probability and turn an already desperate game state into near-assured victory for the Saints.

So how did it happen?

Seahawks set in a Bandit formation: Chris Clemons, Aaron Curry and Raheem Brock as the down linemen. Jordan Babineaux and Earl Thomas are playing up, and all 11 Seahawks are within ten yards of the line of scrimmage.

New Orleans is split two wide, two tight, two a side in a formation that looks like a "W." 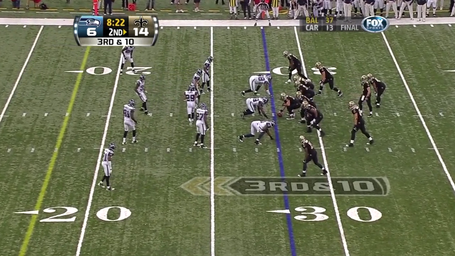 This time the Seahawks react to Brees's deep drop and generate pressure. It's a double safety blitz and a beauty, but interior pressure proves inadequate. Here's how it looks as a diagram. 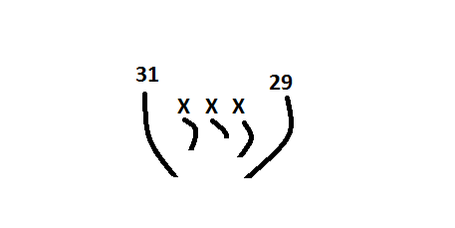 Clemons and Brock attack in. Kam Chancellor and Earl Thomas attack the edge. Chancellor is able to evade a block by Jimmy Graham and is free to the quarterback. 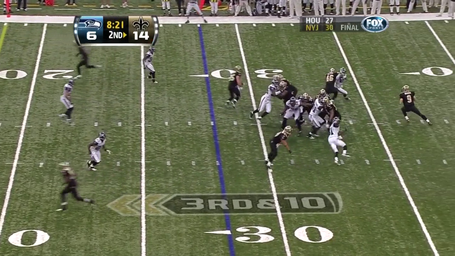 The Saints initially block with eight, but both tight ends release into out patterns. Babineaux and Roy Lewis stick underneath in case Brees outlets. Jermon Bushrod sees Chancellor coming free and shadows out to block him. That stop Chance but also weakens the Saints interior pass blocking. Simultaneously as Bushrod picks up Chancellor, Thomas beats Evans around the edge and closes on Brees. 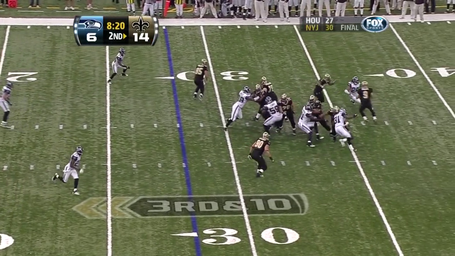 Brees has again taken the snap out of shotgun, continued into a drop step, and is 8-9 yards behind the line of scrimmage. Seattle has effectively countered by attacking wide, but scheme is undermined by execution.

One failure creates another. Look at the sequence of pictures. In the above, Curry is facing the left sideline. In the preceding picture, we see Curry still recovering from a failed spin move. The result, aided by Brock's inability to generate push (albeit against a double team), is a substantial lane for Brees to step into and away from pressure. He slides forward and passes towards Colston running a hitch on the right. 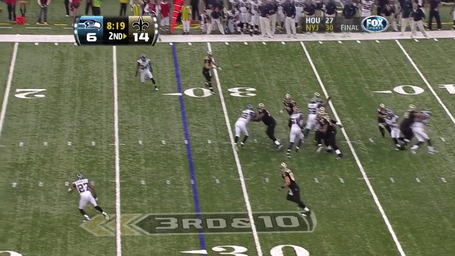 You can see the football is right around the 30 when Curry makes contact. Football is a game of milliseconds.

Seattle's secondary is in a cover 3, with one interior pass defender sacrificed for an additional pass rusher. The shallow coverage is Babs, Lofa Tatupu and Roy Lewis. The deep coverage is Kelly Jennings, Lawyer Milloy and Walter Thurmond. Thurmond makes the second mistake that allows this completion. He drops too deep into coverage and stumbles out of his break. He is able to limit Marques Colston's run after catch by athleticism alone, but the catch nets the first.

Seattle's defense breaks down because:

The Seahawks anticipate and counter Brees's deep drop, but do not generate interior pressure. Brees steps up and throws an accurate pass. Better play by Curry (which is very possible) or substituting Curry for a more powerful interior presence like Brandon Mebane can create that vital interior pressure. No lane to step into means no chance Brees escapes Thomas.

Thurmond shows his inexperience. He drops too deep and stumbles perhaps attempting to compensate. That leaves Colston wide open, which speaks for itself. Marcus Trufant may be able to execute and so too may Walter Thurmond if given another chance.