Seattle didn't force another third and long until early in the fourth quarter. That speaks for itself. The Seahawks were down 34-16 and any chance of victory hinged on getting the Saints offense off the field. Even that wasn't enough. Seattle needed a turnover.

Split backs with the quarterback in shotgun formation regularly leads to seven blockers. Seattle could try to overload and force a back to block across the formation, or it could zone-blitz and hope a defender flies free while dropping sufficient coverage. It shouldn't send the house, in my opinion, but it might send the house because any completion that achieves a first is equally damaging. And if the prize is a turnover, any and all stakes may be wagered. 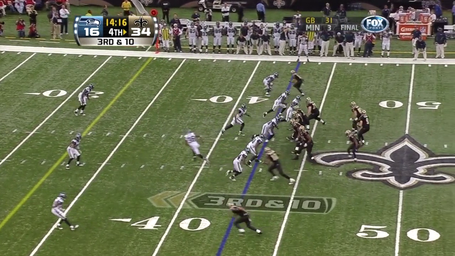 And wouldn't you know it? It doesn't do a goddamn bit of good. 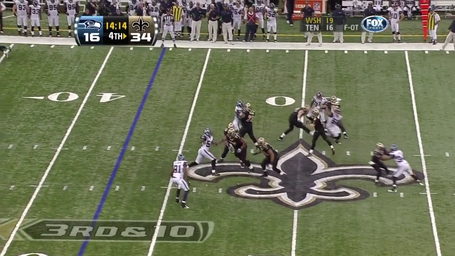 You can see Walter Thurmond's feet in the top right corner. He is one-on-one against Lance Moore and Moore has him beat deep. Kam Chancellor is supposed to double over top, but he's 10 yards short and two seconds late. Moore stabs out his right arm and catches the point of the football in his palm. He pulls it into both hands and step-steps before tumbling out of bounds. 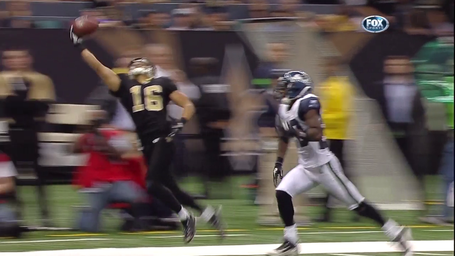 Seattle blitzes out of desperation. It pays for it, but the game is all but decided. Though Thurmond is beat deep, he does a very good job of working Moore towards the sideline and minimizing his space to receive in-bounds. But Moore does, and that's the breaks when you're facing one of the best passing attacks in the NFL.

Seattle's defense breaks down because:

It commits too many defenders to an ineffective blitz.

Chancellor is out of position.

The team is so far behind so late in the game, the Seahawks desperately attempt to force a turnover at all costs.