A couple of quick notes for you:

-- I wanted to take a minute to encourage you all to write fanposts, because they're your friend. Fanposts are great because they get conversation going, discussion going, arguments going, and enthusiasm going. They are free. They can be fun. You can show off your writing talents. You can bring up good points. You can share your thoughts on the Seahawks. You can talk about college prospects you like. You can be funny. You can be serious. You can be intelligent.

You can be all these things and most importantly, you can contribute to this community. I've noticed some really, really great fanposts these last few weeks and just wanted to encourage you all to keep em coming. If you have thought about it and then either got lazy or got scared, stop being a lazy ass or stop being a sissy. Just kidding. But seriously. Do it.

I am thinking of doing a weekly "fanpost of the week" feature where I pick out one fanpost that either made me laugh or made me really think, and highlight it on the front page. The international fame and prestige this garners should be reason enough for you.

In all seriousness though, increased fanposts will make this place more interesting, plain and simple. So I implore you, share your thoughts!

-- Don't forget about the Field Gulls' tickets page. It's up at the right corner of your screen and gives you the opportunity to find great deals on Seahawks tickets. So give it a look-see. 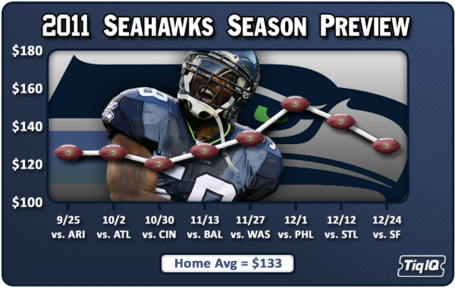 This shows you the average prices of home games over the season, as of a couple of weeks ago. As you can see, apparently no one cares about the Bengals so you might want to jump on that boat right now.

-- Finally, in case you've missed it, in addition to Thomas, Benne, Brian, DJ C_Raig, Scruffy, Whiskey, Jacson and Krazyleggs, Field Gulls has added some new writers so watch for their contributions this week and in the coming months. Kenneth came on like a boss and stirred up some action with Giants fans last week, which was great fun, and it was awesome to have Rob Staton's contributions last week as well.

Dukeshire should have some stuff on the Giants game forthcoming, and new writer Charlie Todaro will be starting this week as well. I'm personally both really excited to have them contributing here and think that the Field Gulls team has been kicking some major ass as of late. Derek Stephens should have new stuff this week, and Davis Hsu let me know he'd be doing some writing as well. As you may know, Scott Enyeart is going to be contributing here with a weekly podcast that we do with KJR's Jason Puckett, so look for that on Thursday. Chris is still in the mix and let me know he might be posting some material this week as well.

I've added writers as we go along in an effort to limit the amount of filler here and grow the quality of every article. It's a concerted effort to bring you the best coverage of the Seahawks and a wider perspective and subject matter. We work hard to do so. So, I'm looking forward to this week's stuff.