Share All sharing options for: The Seahawks' Quick Start At New York

Against Atlanta, the Hawks managed 7 points on 138 yards of offense and were 1 of 5 on third downs. Atlanta picked up 16 first downs to Seattle's 5, and controlled time of possession 21:14 to 8:46. The pattern emerging here is that the Seahawks are very, very slow starters thus far this season.

Dave Boling summed it up before the Giants game: Last season set the tone, when Carroll's first Seahawks team was outscored 230-128 in first halves. But they're nowhere near keeping it that competitive in the first four games of 2011, being outscored 67-13 in the first halves. Rallying to "win" the second halves 45-30 has left them 1-3.

So what's the issue? Pete Carroll explained, "We're not creating much offensively to help us. We've been OK at times on defense. I really think we need a spark offensively. It's pretty clear we've been able to pick it up at times in the second half. I'd like to see if we can get started faster and get off to a little better rhythm.

"I'm never one that relies on fast starts. But at this time, we need to do better than we're doing. We need to take care of the football and move down the field some, use the clock and get a good look at our opponent and see what's going on."

Because of all the hubbub going into New Jersey about quick starts and striking early, it was super refreshing, and honestly a little shocking to me, that the Seahawks marched down the field on their first drive with a nine-play, 80-yard drive that ended with a Ben Obomanu screen pass for 11 yards and a score. This sponsored series is called the Power Play of the Week, which is sweet because I love breaking down plays in the first place. I thought this play in particular was huge for the Seahawks, for several reasons.

One, everyone knows how much the Seahawks suck on the road, especially on the East Coast. Hadn't won an Eastern Time Zone game since '07. Hadn't won at the Giants since '83 (shitballs!). To take your opening drive 80 yards and score is huge for the confidence and momentum. Two, this play/drive was tone setting for the day, with everyone on the offense seemingly saying, "hey! We CAN play well over here!"

Ben Obomanu came up big on this drive, catching two passes, one for nine yards on the game's first play from scrimmage and one for 11 and a first down to put the Hawks into Giants territory. I don't have the stats in front of me, but I remember hearing that the Hawks didn't even advance past mid-field in the first half of some of those early games.

Anyway, a few plays later, the Hawks are at the 11-yard line, in 2nd and 10. 12:34 in the first quarter. Spread offense time, with Sidney Rice and Golden Tate out left, Ben Obomanu in the slot, and Doug Baldwin and Kris Durham out to the right. What a fun little formation!

I've outlined the routes each receiver will take. The key to this play isn't Ben Obomanu -- though he does well to get into the endzone, but it's Golden Tate laying a sick-ass block on the Giants SS Antrel Rolle. You'll see. 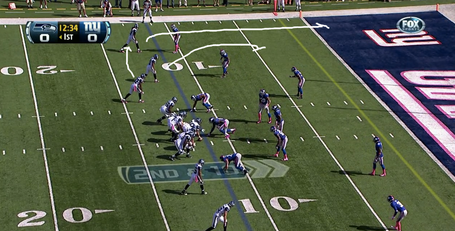 Above, you can see Sidney Rice streaking up the sideline and the corner is smartly paying close attention to him. Golden Tate is running parallel to Rice. Tarvaris Jackson swings a pass out to Obo.

Obo is faster than a lot of people give him credit for, and I've said it before that I believe he may be the Seahawks' best receiver at end-arounds and bubble screens. He's just got that intangible elusiveness and smoothness in his running. Anyway, as I said, the key to this play's success was all Golden Tate, and you can see above what I'm referring to. Tate delivers a picture perfect cut block on Rolle that knocks him to the ground.

By the time Rolle has recovered, Obo has already turned the corner, easily beating Deon Grant (34) to the edge (thanks to an awful angle of pursuit by Grant). Over in la-la land is Sidney Rice and the corner matched up with him, and at this point the corner hasn't even turned his head yet to see what's going on.

Rice does a great job sealing him off once the corner, Corey Webster, realizes what's going on.

All in all, a great first drive and a great job by the Seahawks reversing the slow-start trend. The Hawks would go on to fumble in the red-zone twice in the 1st half, and without those errors it might have been a first-half runaway by the visiting underdogs. Clean em up Hawks!!