Chris Clemons Is Good At Football, And Other Observations

Share All sharing options for: Chris Clemons Is Good At Football, And Other Observations

Remember this article from Thomas, back in July, that talked about the Leo End and the Blitz? If you don't, I'll summarize one of his points succinctly: the Seahawks use some unorthodox-ass formations to blitz.

Thomas' piece acts as a great intro to a play-breakdown from Sunday's game that I wanted to go through. As Beeks said:

"Don't be fooled into thinking our blitz formations necessarily have much to do with our basic 4-3 under and its unbalanced line, as we often blitzed out of the bandit or similarly weird formations. Take this one, 3rd and 8 from the San Fran 15: 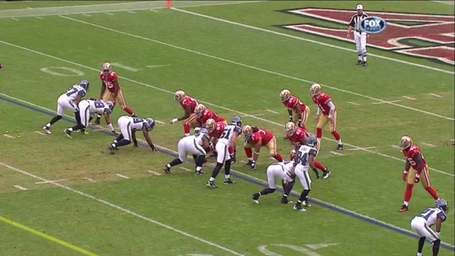 At the snap, Babineaux and Lewis drop back while Tatupu joins the down linemen in rushing the passer. Tatupu is picked up by the running back, and the blitz/offensive confusion frees up Clemons to go one-on-one with Barry Sims and Curry one-on-one with Chilo Rachal. Both beat their men very quickly and combine to sack Alex Smith for a loss of 10.

It's good, it works, and regardless of how our line develops, I think our more creative blitzes will remain key to our defensive formation, both secondary blitzes, formations with two leo ends (though the frequency of these should lessen if Red Bryant is in for all games), and in the form of Aaron Curry blitzing inside, as he's a force at that role (3.5 sacks and 12 pressures over the season, none of the sacks coming from the Sam position)."

Now, fast forward to Sunday, and Thomas' prediction there will prove to be true, in this case.

Take THIS play, similar down and distance. 3rd and 7 from the Giants' 16 yard line. The Seahawks have six, seven if you count a creeping Earl Thomas, threatening the line: 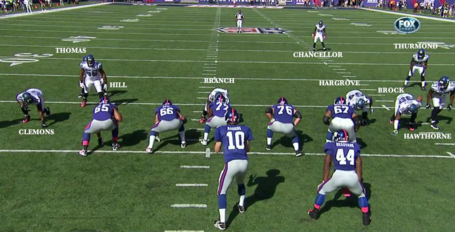 Chris Clemons, Earl Thomas, Leroy Hill, Alan Branch, Anthony Hargrove, Raheem Brock, and David Hawthorne. Our base formation has been thrown to hell - middle linebacker Hawthorne on the edge next to Raheem Brock, and ridiculous and weird splits between Clemons, Branch, and Hargrove. Hargrove has essentially taken over what Curry was used for a lot of last season, as a down defensive-tackle with some speed and agility in obvious passing situations.

I have to imagine Eli looking at this package and saying to himself, 'what the shit is this all about?' 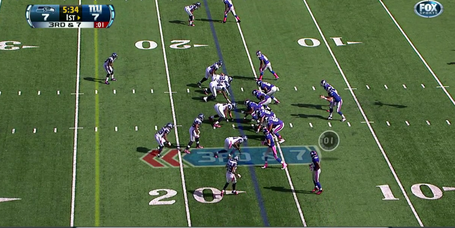 Leroy Hill drops back into coverage. Brock and Hawthorne run a stunt, switching sides and trying to slip through on the offensive right side. The Giants line shifts to help to the right side and Earl Thomas comes in on a blitz. Ahmad Bradshaw picks up Earl nicely, but now Chris Clemons is on an island to his side, mano-a-mano with the Giants' left tackle, Will Beatty.

The right side of the Giants' line actually does a pretty good job in protection, but Earl Thomas' blitz doesn't allow Eli much room to move around or climb the pocket. Brandon Browner and Walter Thurmond have the Giants' receivers well covered, so Manning is reticent to force anything in this spot. 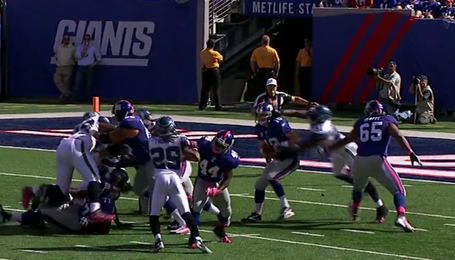 Good for Clemons, who makes an underrated move with his left arm - he first throws his arm up and back down, a swim-move, to Beatty's arm to get his shoulder around him, then he comes back with an uppercut punch to dislodge the ball with his left fist, shown above. Watching it in real time is pretty impressive, and I'm already pretty damn impressed with Clemons' athleticism as it is.

Anyway, this play caught my eye pre-snap when I went back to re-watch the game, just because of the weirdness of the formation, and the fact it caused a fumble - that was recovered by Earl Thomas - was all the reason I needed to take a closer look at it. Good stuff.