Seahawks Replay Booth: Marshawn Lynch With An Inside Zone Run

Share All sharing options for: Seahawks Replay Booth: Marshawn Lynch With An Inside Zone Run

I'll be honest - I don't know a whole hell of a lot about the zone blocking scheme. I think I know the basic tenets of it but that's about where my expertise ends. I was never a lineman, I'm sure there are millions and billions of intricacies that I'll completely butcher and/or ignore in this post but let's talk about the zone blocking scheme for a minute. I wrote this post as an opportunity to research it a bit with a recent example and get your thoughts on it as well.

Whenever I'm in the mood for nuts and bolts football reading, the first place I go is Smart Football. Chris Brown does a great job with schematic and strategic football writing and is now a staff writer at Grantland as well, which is awesome. He wrote a piece on zone blocking a while back, that I'll try and integrate into this post.

First off, let's set the stage: 9:02 in the first quarter last Sunday at the Giants. Seahawks in a 1st and 10 situation here with Tarvaris Jackson in the shotgun. Seattle is in their "11" personnel grouping, with TE Zach Miller to the right side of the formation. The Seahawks are going to run an inside zone run off of a draw. Because the Hawks threw the ball 7 out of 8 times on their first drive, a draw is a good playcall here, as I figure the Giants are expecting a pass, or at least looking pass first. 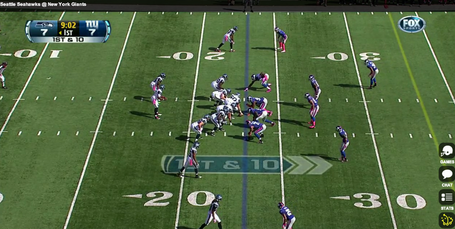 The Giants are in a pretty standard looking cover-2 nickel with 4 down linemen and three linebackers. The nickelback has inched up a bit to play on Doug Baldwin, who is in the slot to the right. The ball is snapped.

The assignments dictate a slide to the left by each lineman, with Max Unger sliding right to double team, along with John Moffitt, the Giants' 3-tech Rocky Bernard. This means Paul McQuistan slides over to block the nose tackle, in this case DT Chris Canty (the tallest, lankiest nose tackle ever at 6'7, 317).

But first, I'll let Chris Brown explain it a bit:

If "covered," there is very little "zoning" at all: The lineman's job is to block the guy in front of them. Fans, commentators, and even coaches often overcomplicate things. The "zone" aspect comes in with "uncovered" linemen. If "uncovered," the lineman must step "playside" - i.e. the side the run is going to - and help double-team the defensive linemen along with his "covered" cohort. Once the two of them control that down defensive lineman, one of the offensive linemen slides off to hit a linebacker. It's not that complicated.

Indeed, let's say the five offensive linemen are covered by five defensive linemen. In that case, each guy (save for maybe the backside offensive tackle) will just block the guy in front of them - there is no "zoning" at all."

In this case, center Max Unger and left tackle Russell Okung are the 'uncovered' players. Unger helps out with Moffitt very briefly before turning his attention downfield. Okung doesn't even hesitate before looking to the second level. See below.

Moffitt, the right guard, is engaged with Bernard, and Unger is sort of there as well, but looking downfield. Okung comes off unchecked. 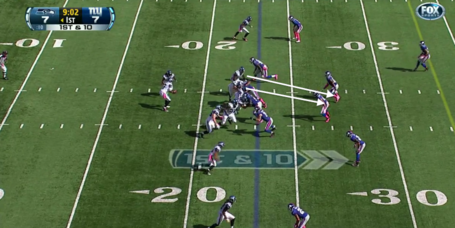 Both Moffitt and McQuistan do a great job of sealing their defenders to the right side of the field and Unger and Okung pull downfield to make some blocks on the linebackers waiting for Lynch (about to take the handoff).

It's a bit hard to see below, but Okung cut blocks the weakside linebacker and Unger takes on the middle linebacker head on. Both of these blocks are enough for Marshawn Lynch to squeeze through, right up the middle of them.

As we've seen before, Lynch now has a head of steam and a few arm tackles aren't going to work well.

He churns out a few more yards, with four or five Giants in tow before being brought down. 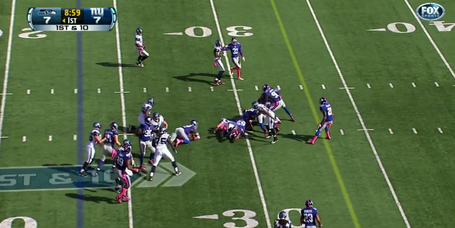 I just thought this was a great first down run for 9 yards that put the Seahawks in an easily manageable 2nd and 1 situation (which they picked up on a screen dumpoff to Lynch). This was a good example to bring up because you can pretty clearly tell the assignments and how the ZBS works, at least at it's most basic principal.

As Chris Brown told us, "The lineman's job is to block the guy in front of them... (Moffitt and Carpenter do just that).

If "uncovered," the lineman must step "playside" - i.e. the side the run is going to - and help double-team the defensive linemen along with his "covered" cohort (Unger does this with Moffitt for a split second).

Once the two of them control that down defensive lineman, one of the offensive linemen slides off to hit a linebacker (which is exactly what Unger does as he goes downfield and hits the middle linebacker, who, along with Okung, help spring Lynch for an addition four or five yards).

It's not that complicated."