The theory behind a play-action heavy team is that you run to set up the pass.

I theorized before the Giants game that the Seahawks had to pass to set up the run. I tweeted before the game that I believed that Seattle should throw on 1st and 10 75% of the time before hitting midfield and before halftime. After midfield I thought they could run it a bit more, and after halftime the run-pass ratio would be dictated by game situation.

The Seahawks found themselves in eight 1st and 10 situations before midfield, before halftime.

The two runs on first down were disguised out of passing situations, note the formations: 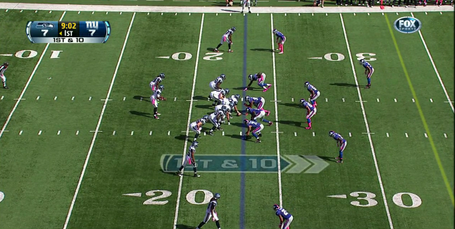 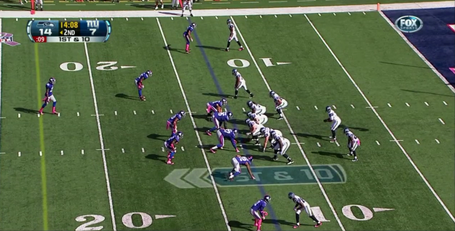 The sack and scramble were originally designed to be passes. Darrell Bevell designed six of the eight plays on first down - before midfield before halftime to be passes - 75% #humblebrag.

I am not saying the Seahawks should do this every game. They may be able to run the ball on Cleveland. In this game, I figured that the Giants were going to put up over 20 points (Seahawks needed to put up points and early) and that running on first down would result in a likely 2-yard gain. Now you face 2-8 on your own 22 yard line- which is a known passing situation and the Giants d-line would begin to feast.

I believe the initial first down in a drive for this team is critical because it does wonders to flip field position whether points are scored or not. I also think it builds confidence in our newly acclimated quarterback and offensive line.

It's good to see the early success in passing on the Giants set up the run in several ways:

(a) By allowing the Seahawks to run out of passing sets, i.e. draws.

(b) By putting points up before halftime (novel), it creates a game where the Seahawks can afford to run the ball in the second half when they are leading or close behind.

(c) The success in the running game when finally given more opportunity (Seahawks had 76 snaps versus the Giants, a season high) can THEN help set up play-action.