With the news that Marcus Trufant has been placed on the injured reserve it got me wondering a bit how the Seahawks might use their remaining cornerbacks and safeties, and if they might change up the schemes or philosophies. I went back and re-watched the Seahawks/Giants game because Troof was out of that game and it might give us a glimpse of what to expect going forward.

What I found wasn't too surprising. The Hawks run out of their base or nickel package, with little variation in personnel (mostly on the line - Hargrove in for Branch/Mebane, Brock in for Red/Clemons), almost the entire time. Kam Chancellor and Earl Thomas see nearly every snap, as does Brandon Browner.

If the Hawks continue with this methodology, you'll see Brandon Browner at RCB and a combination of Walter Thurmond and Richard Sherman at LCB. In the nickel, Sherman takes Thurmond's spot on the outside at LCB and Thurmond moves to the nickel, taking the place of K.J. Wright, typically.

The first time I saw the Hawks put in anybody else was when the Giants went into 2-minute drill at the end of the first half, following an untimely Tarvaris Jackson interception. Kennard Cox was the defensive back in this series, and he both blitzed and dropped back on different plays as the Giants marched down the field. I'm not sure why he got the nod over Sherman in that drive, but that's what happened. The Giants scored a touchdown. I didn't see him in any package outside of special teams for the rest of the game.

Here's one example, with Cox in the slot as the nickel, Browner at RCB, and Thurmond at LCB. 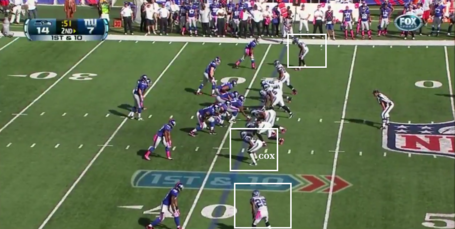 One thing that was interesting about this game was that I didn't see the Seahawks use their "Bandit" package one time. They made a living off of that last year but it's been pretty insignificant for Gus Bradley this season. Why? Well, it could have to do with a lot of things: philosophical changes, personnel changes, and opponents to name a few reasons. Roy Lewis and Lawyer Milloy were studs in the bandit last season, as was Jordan Babineaux, very effective on blitzes and in coverage, thus masking the defense very well.

But with the three of them gone the Hawks have moved away from it. This is something that Beekers has brought up during the early part of the season and is worth noting again, and it will be interesting if they start phasing it back in as Roy Lewis gets healthy.

Here are some looks you'll see the Seahawks in:

Their base package. Four linemen, three linebackers. Browner is at RCB and Thurmond at LCB. You can see that Thurmond is playing up close on the line and Browner is off as the Giants WR goes into motion. I didn't keep exact track of the numbers, but Thurmond/Browner play both press and off-man coverage fairly evenly, mixing it up and keeping the offense guessing. 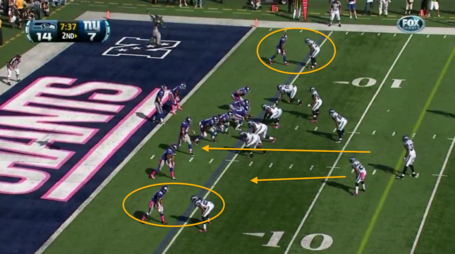 Here's a look at their Nickel package. Richard Sherman is LCB, Browner RCB. I've used arrows to indicate that Thurmond, the nickelback here, is responsible for the outside slot receiver, and Kam Chancellor has his eyes on the inside slot. 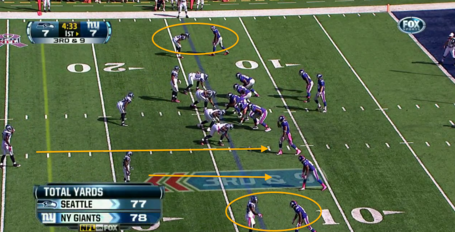 Here is it flipped to the other side. The Giants lived in this formation.

The Giants finished with 420 yards of passing so the first thing you might ask yourself is, 'why didn't the Seahawks roll out more dime/Bandit packages to stop Eli?" Well, first off, if you take away that ridiculous Victor Cruz reception that should have been knocked down or intercepted by Kam Chancellor (or could have, in fairness), Manning's passing total goes down to a less eye-popping 352 yards.

Second, with this defense that is geared toward stopping the run on first and second down and forcing a third down situation, the Seahawks actually did quite well for themselves when given that opportunity - the Giants went 1 for 12 on third downs, and that one success was on that ridiculous Victor Cruz reception. Anyway, you can make the argument that the defense did, more or less, what it was designed to do: Bend but don't break.

They limited the Giants to 11 points in the second half, - respectable-, and did enough to get the win. They forced the Giants to be one-dimensional by holding them to 2.8 yards per carry on 25 rushes. That probably wouldn't have been the case if we would have seen the bandit and dime stuff more often.

I thought that Thurmond, Sherman and Browner played well - Thurmond broke up at least two passes and looked to have the quickness we've been hoping for. Sherman played well enough - I didn't notice any egregious mistakes. I'm excited about this trio.

Overall though, it is interesting that the Seahawks have almost completely abandoned the Bandit, something that was such a staple last season. The first time I saw Atari Bigby was in the fourth quarter, on one play. That's not official, but my perception. I never saw Jeron Johnson.

It is of note though that Byron Maxwell has been hurt, Malcolm Smith has been hurt, and Roy Lewis has been on the PUP. These three guys figure to be players in those packages so perhaps when they're healthy we'll see a resurgence of the DB-heavy packages? Bigby played fine in Chancellor's absence against the Falcons so perhaps he'll see more time?

I have no thesis or theory. I'm just bringing it up and I'm anxiously awaiting the rest of the season so we can find out.