Share All sharing options for: The Seahawks' Amoeba Defense

A description of the Amoeba; "...aptly nicknamed because of its shapeless, ever-changing appearance. The formation, consisting of at least five defensive players in the box with one or fewer down linemen, creates confusion for the quarterback in assigning protection and makes the defense more versatile in pass-coverage schemes." (Doug Farrar talks with Greg Cosell about the relationship between the no huddle offense and Amoeba defense here, a great breakdown.)

In honor of the 2010 post-bye-"bandit"- breakout in Week 6 at Chicago, and the possibility we see an expanded or altered Amoeba at Cleveland, I want to show an example from Week 4 against Atlanta. The first picture is after the jump. 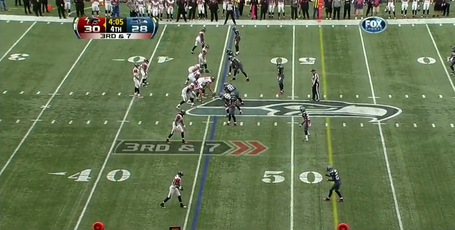 From the top of the screen, along the line: Browner, Sherman is in the top slot and Clemons is standing up inside of him, Mebane is the down lineman across from the right guard/tackle with Brock off of his left shoulder, Bigby is standing up on the hash (Chancellor was injured) at the 46 and a half. Hawthorne is on the top hash at the Falcons' 49, four yards off of the line, creating a triangle with Clemons and Mebane. Thurmond is in the slot on bottom at the Seattle 49, Trufant is on the first down line and Thomas is pictured half-off the screen. Now the fun begins... 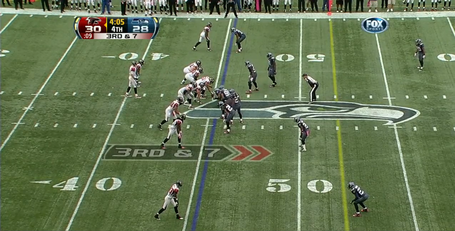 First, the four defensive backs who were not in up in the box-Browner, Thurmond, Trufant and Thomas-have made slight adjustments, at most. But inside the box, it's a bit of chaos.

Sherman moved with the slot receiver from the top, now off of Bigby's left hip on the bottom. Hawthorne has moved up two yards, Clemons has dropped two yards. Brock is now standing up, Mebane is the only man down.

It helps to know before describing the play; it ends with Ryan getting tripped up as he crosses the top 50 and lands around the 45--a few yards in front of where Thomas is standing in the final picture. Imagine Ryan being flushed left by Clemons at around the 37 on the top hash, then rounding up-field towards the 50 marker.

At and after the snap; Clemons times the snap very well on the outside versus the tackle, then shoots inside towards Ryan. Hawthorne comes up to time the snap not as well as Clemons and takes on the center. Not much happens there. Brock twists around Mebane and Hawthorne , then gets picked up by the left guard.

Bigby drops to the middle, crossing the top hash at the Falcons' 49 and a half, then covers the back that leaks out the backside towards the sideline, creating a hole for Ryan to scramble into. Bigby can't get back in time and Brock tripped Ryan in pursuit, but a little too late.

The play resulted in an Atlanta first down, another two minutes soon came off the clock. We know the rest.

The point; thus far, Seattle has used this as a third and long, sub package wrinkle for a handful of plays a game, at most. A few things to note: Seattle uses other variations of the package, such as starting in a three down lineman look before morphing; Anthony Hargrove has been used as the lone down lineman; the formation has allowed a big play or two. I think Seattle doesn't look fully comfortable in the scheme at times, but confidence can only be built with reps.

Danny talked about the potential the changes at cornerback without Marcus Trufant here and Derek did here. With Seattle eventually getting nickel and sub package corner Roy Lewis back of the PUP list and Byron Maxwell back from injury, Seattle will have more options. How does a healthy Malcolm Smith, Seattle's quickest linebacker, affect the equation? What about the long and savvy K.J. Wright? Could Jeron Johnson bring value as a blitzer or covering a power/fullback type? What about Chancellor or Thomas? Seattle will have more options when using sub packages.

I'd be intrigued if Seattle experimented with another lineman as the one man down, or tried a variety of players instead of Bigby or Hawthorne. Seattle has 64 quarterback pressures, but they are tied for 28th in the league with eight sacks. They simply need to start finishing when in pursuit of the quarterback, and hopefully they experiment with their personnel to get it done.
This week; part of Seattle's plan should be to confuse Colt McCoy by disguising coverage and blitzes pre-snap, trying to force mistakes. One thing Seattle must be cognizant of is minimizing scrambling lanes if the pressure gets bunched up or an edge rusher gets upfield too quickly, just as in the example above.
The Amoeba could be useful this week, especially if Cleveland relies on the passing game. After all, McCoy is averaging 43.4 attempts a game, second most in the league. Depending on how this game transpires, that trend could continue. I'm looking forward to potentially seeing the Amoeba.