Share All sharing options for: Power Play of the Week: David Hawthorne's Interception

I didn't really set out this week to just heap a bunch of praise on David Hawthorne but his game was so tight he really left me with no choice. (Yes, I just said his game was tight.) Heater got the Game Ball of the Week and he's the subject of the Power Play of the Week as well, but regardless of whether we had had this sponsored post or not, this is a good play to break down so let's get to it.

Through a synergistic confluence of suckatude, the Seahawks and Browns game was still 3-0 in Cleveland's favor with 10:31 or so in the 3rd Quarter. With the Seahawks offense in a comatose state, it really was up to the defense and special teams to put the Hawks in a situation where they could steal a win.

It was the 11th play of the Browns drive - a drive that had chewed up nearly five minutes of the first part of the third quarter and had taken them to the Seahawks 30-yard line. They were threatening, and the Seahawks didn't seem to have an answer.

10:43 on the 3rd Quarter clock. 2nd and a manageable 4 yards to go. The Browns are in a two receiver, two back set, with a tight end in-line to the left. I've highlighted the Browns' routes; tight end on the left is going to run a deep drag and the fullback Owen Marecic is going to run a shallow drag. These types of route combinations are typically meant to make linebackers in a zone decide which player they're going to stick with. 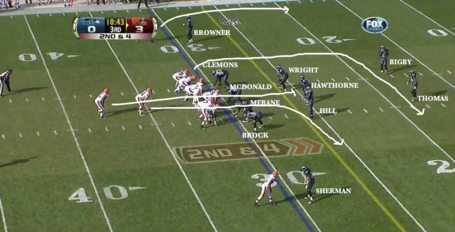 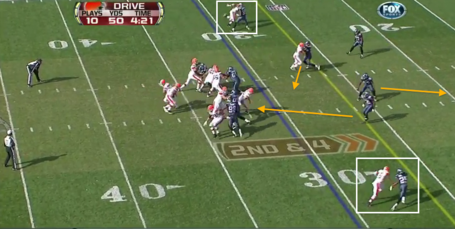 It's play action, but Heater doesn't buy it. He holds his ground and Montario Hardesty follows Owen Marecic through the hole.

Marcecic then runs a shallow drag - you can see him at the bottom right of your screen, and Leroy Hill, playing the weakside here, shadows him to the edge. K.J. Wright, seeing Montario Hardesty stop for the dump-off option to Colt, quickly covers him up and prevents Colt McCoy from checking down. He hesitates

Colt gets good protection, but as his running back is being covered in the flats, he decides to let one fly.

He throws it to the deep digging tight end but David Hawthorne has drifted back and to his left to cut off the passing lane. He jumps up, alligator arms the pass but it hits him in the face soft enough that he corrals it on the ricochet. Big play by Heater here to stop the drive, especially considering the Browns were marching down the field and trying to take the momentum.

There were several keys to this play. First, Hawthorne didn't buy the play action. I'm not really sure why - it could have been a designed scheme where he is automatically meant to backpedal down the middle of the field, but regardless, had he come up to the line to stop the run, the deep drag likely would have been open, with Earl Thomas trailing above, there to make the tackle.

Second, K.J. Wright took away the dumpoff. If you look at Colt McCoy's yards per completion average, 5.5 on the year, 5.1 in this game, you can pretty easily deduce that he likes to hit his check downs and quick out options. Pick up a few yards, live to see another down. In this case though, in what may have been the actual number one option - Montario Hardesty down the middle about 3 or 4 yards for a quick first down, Wright's quick reaction to take away the pass could have been integral in Colt's decision process throw the ball downfield into double coverage.

It's obviously impossible to know what the designed play was here or who exactly he was looking at, but that's the impression I get, combined with his penchant to hit the short easy routes over the deep routes. Either way, a job well done by the Seahawks defense.