Earl Thomas on the 1st and 10 Blitz

Share All sharing options for: Earl Thomas on the 1st and 10 Blitz

The Seahawks have used Earl Thomas in their pressure package on many downs and distances this season. They use him all over the field and line him up in a variety of ways; standing up on the edge, as a roamer moving across the field or coming in from the secondary.

One common situation for Thomas to blitz is on 1st and 10. In this situation he's been able to disrupt the play on multiple occasions. But as we'll see later on; if the blitz falters there is potential for the big play.

I will show three plays, mostly pictures and less words. Easy reading for a Sunday morning.

This first play was the first offensive play of the third quarter in Week 1. Note the game information in the image. Seattle is in an over shifted 4-3. 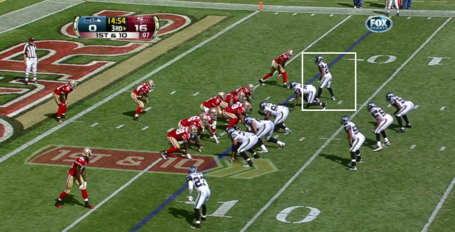 Thomas is the eighth man in the box, on the weakside, inside the receiver, standing up on the edge.

After the snap Thomas bursts inside the slot receiver and across the line of scrimmage, as the end occupies the tackle. Gore is about to take the pitch to the outside, but Thomas is all over the play. Notice the solid penetration by the defensive line and the linebackers waiting to help.

Thomas has outrun the blocking and now Gore is stuck. The play gets forced back inside and the defense does a nice job of bottling up the play. Gore gets tackled for a loss and the 49ers go three and out.

This next play happened during Week 4 against Atlanta. Note the game information in the image. Seattle is in a 4-3, with Marcus Trufant near the line because there are no receivers to his side. 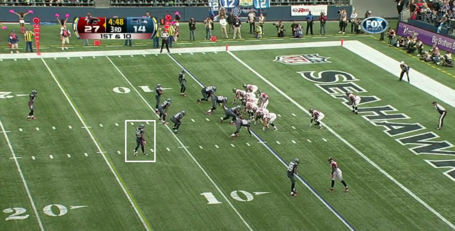 Here Thomas is coming in from the secondary, on the weakside. 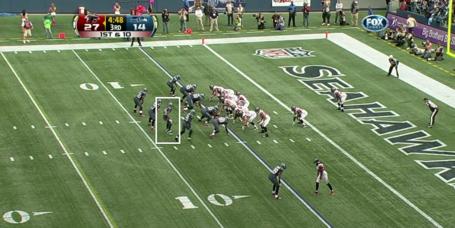 Notice two things. First, a tight end has shifted and Atlanta now has a tight end to each side of the formation. The linebackers have shifted to the right a bit, and Thomas has moved into the box. What is not shown here is that when Thomas comes into the box, he adjusts Aaron Curry to move onto the line next to the end. You can see Curry in motion towards the spot.

Thomas continues his attack towards the line on the snap. He is about to find a crease and explode into the backfield.

There we have it. Alan Branch eventually comes along to help make the tackle. The Falcons went three and out, then Marshawn Lynch scored on an 11 yard run.

This final play is the reason I chose to highlight this particular situation. The first two plays showed the good that can come from a Thomas, 1st and 10 blitz. This time, not so much.

Again, note the game situation in the picture. Seattle looks to be in an over 4-3. 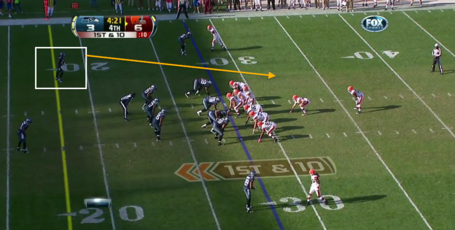 Note Thomas on the weakside, top of the screen.

Here he comes in at a pretty solid clip. Dissimilar to the Atlanta play, the outside linebacker to Thomas' side (K.J. Wright) stays inside of both Thomas and the end. It's also worth noting there was no pre-snap motion by the offense, perhaps why Wright stays as is.

Thomas goes outside of the end, who is sandwiched between Thomas and the right tackle. K.J. Wright seems to get tangled up with David Hawthorne in the middle. Notice the giant hole off of right guard, the fullback going untouched into the hole. Maybe Wright was supposed to be there...

...Or was Thomas supposed to be there? Regardless, Thomas is circled on the ground and now out of the play completely, as is the defensive end. The Cleveland line seals the lane and off Montario Hardesty goes. The consolation prize is that this play results in Kam Chancellor's highlight reel, monster hit on Hardesty.

In Cleveland, Thomas was not a factor around the line of scrimmage like he's been in other games this season. The point here was simply to highlight one of the many ways Seattle uses Thomas on the blitz. Be on the lookout for Thomas on 1st and 10, and don't be surprised if you see him attacking the line on many downs and distances.