Kelly's Heroes: The Seahawks and the Screen Pass, Part I

Share All sharing options for: Kelly's Heroes: The Seahawks and the Screen Pass, Part I

I wish I had some statistics in front of me and I'm too lazy to try and dig up some kind of number on how well the Seahawks run the screen pass, but if I had to guess they're pretty sh*tty at it. I'm relying on memory and a biased perception, but it seems to me that they always try to run their screen passes as a sort of last-ditch effort on third and long and it never works. (I don't know if that's entirely accurate, but that's just my memory on it)

Why doesn't it work? Well, a screen is a very slow developing play and requires an element of surprise. Running a screen in an obvious passing situation like 3rd and long can be ineffective because of two things. One, if the defense all-out blitzes and the offense can't pick it up for long enough, the play is dead. You need a few seconds to let things develop downfield before you can dump it off underneath and give the runner some room to breathe. Also, a lot of players anticipate a screen in those situations and can sniff it out easier.

Second, in a 3rd and long or obvious passing situation, teams tend to drop more defenders back into coverage and blocking downfield becomes harder. Teams won't send as many players into pass rushing, maybe only sending three or four guys, and because a screen is inviting a pass rush to draw the defensive linemen and ends forward, if they're dropping back into zone the screen just won't work.

In other words, for a screen play to succeed, you have to attack the defense where it's most vulnerable, and that means you let the pass rushers come toward you enough to take them out of the 0-5 yard downfield zone and let the defensive backs get far enough downfield in coverage that there's a little bit of breathing room in that intermediate area.

It was so refreshing to see the Seahawks run two very well executed screens in last week's game versus Atlanta and it's why the screen-pass running Seahawks are my heroes this week.

I'm going to break this post into two posts two avoid a picture overload, but let's start with a 26-yard scamper on a screen by Marshawn Lynch. First thing that jumps out to me on this play? Down and distance. It's 1st and 10, from the Seahawks 28 yard line with 7:02 left in the 3rd quarter, Seahawks down 27-14. Running a screen on 1st and 10??? No way! But I like it! 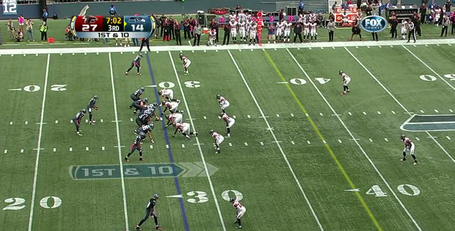 Seahawks in a three wide receiver, one tight end set with Tarvaris Jackson in the shotgun, Marshawn Lynch to his right. The Falcons look like they're in a pretty standard cover-2 nickel with the corners rolled up in relatively close coverage, and the strongside nickelback lined up opposite Doug Baldwin in the slot.

Ball is snapped, Lynch runs forward a bit, feigning pass pro. Doug Baldwin and Zach Miller run crossing routes in the middle of the field that do a pretty good job of occupying Atlanta's two linebackers and the nickelback. Both Sidney Rice (R) and Ben Obomanu (L) run deep sideline routes to take their matched up corners downfield.

You can see now that the nickelback for Atlanta has bit on Baldwin's route and has his back to the action. The middle linebacker, not shown, is still with the play just to the right of the screen. RG John Moffitt and C Max Unger have delay-pulled and are making their way down field to block for Lynch, who is just about to receive the pass.

Lynch bellies up to Moffitt and Unger looks to take on the MLB.

Lynch actually shoves Moffitt into the attacking safety here and John does a good job of engaging him. He also knocks himself silly on the hit. Unger does a good enough job to spring Lynch past Atlanta's oncoming middle linebacker.

Lynch waddles forward for another 16 yards or so and LG Paul McQuistan drives him and Lynch's would be tacklers home. Nice play on a first down to get the Seahawks 26 yards and into Falcons' territory.

Screen passes can be so deadly and frustrating to the opposing defense. Furthermore, they augment a running game for the Seahawks that hasn't really gotten roots yet and gets our backs involved and out into open space. This line is partly built on athleticism and the ability to get downfield, theoretically, and Unger and Moffitt did a great job on this one.

Three plays later, the Hawks would run another very successful screen on a 2nd down. I'll show you that one shortly.