Kelly's Heroes: The Seahawks and the Screen Pass, Part II

Share All sharing options for: Kelly's Heroes: The Seahawks and the Screen Pass, Part II

I talked about a successful screen that the Seahawks ran last Sunday in my first Kelly's Heroes post for this week but I promised a second. Why? Because when the Seahawks run at least two well-executed and successful screens in the same game I'm excited to talk about it. And, because I try not to break my promises. So here we go.

Marshawn Lynch's screen pass brilliance went for 26 yards and this one, by Justin Forsett, went for 18 yards. Thomas brought up a good point that if these plays actually went to a team's rushing totals - not that he was advocating for that change - but if screens like these went towards a teams running stats, the Hawks stat line would look a whole hell of a lot better. As it is, the Hawks ran 15 times for 53 yards at a 3.5 yards/carry clip. If you add just these two successful screens, the line goes to 17 rushes for 96 yards: 5.6 yards per carry. Just food for thought.

Anyway, the situation: 2nd and 10 on the Falcons' 35 yard line. Tarvaris Jackson has just missed a wide-open Ben Obomanu for what would have been an easy touchdown, so the fact this play worked helped to keep the momentum in the Seahawks' favor. 5:38 left in the 3rd quarter, Seahawks down 27-14.

Doug Baldwin on the right slot, Mike Williams on the right flank, and Golden Tate out left. The Falcons have five men on the line, with their Sam linebacker up close on the right. This is a good look if you're going to run a screen, assuming the Sam rushes the passer. 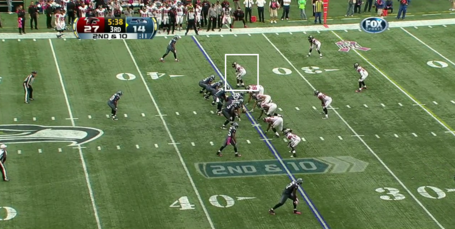 Doug Baldwin goes in motion to the left as if he were running a reverse. You can see the nickelback following him, indicating a man-coverage scheme.

Ball is snapped, with both Tate and Williams running sideline routes and Baldwin running a reverse fake.

You can see that the Falcons' strong safety has bitten on the reverse, and Baldwin still has the attention of the nickelbacker that's shadowing him. The middle linebacker stays home, but is about to get pull-blocked by big Johnny Moffitt.

Above, you can see how many Falcons have rushed forward to pressure Tarvaris Jackson, which is actually playing into the Seahawks' plans quite nicely. Moffitt releases and looks to neutralize the Mike linebacker. I've hidden Justin Forsett a little bit here, but he's dropped down to just off the line of scrimmage and is ready to grab the pass.

Forsett reels it in, looks upfield, and Moffitt has done his job on the Mike. Forsett makes a break for it and gets into the secondary.

Once past that Mike linebacker, Forsett tries to outjuke the free safety on that side but he does a good job of slowing Justin down. The strongside DE, I think, actually recovers and comes down to hit Forsett pretty hard, but knocks him forward for another yard or two.

Again, well executed, well-timed. The Falcons brought six to rush on the play, so that helped.