Why It's Nice To Have Sidney Rice

Share All sharing options for: Why It's Nice To Have Sidney Rice

Hey, did you see how that rhymed? Anyway, remember how during the offseason, when the talk of Sidney Rice coming to Seattle started heating up? Remember how we all talked about how he'd stretch the field, make the opposing defenses respect the pass a little more, take some of the heat off of our other receivers and open up options for them underneath? Well, those weren't just pipe dreams.

It's taken a few weeks for the offense to start clicking and god knows if this will continue or not, but in the second half of last week's game against the Falcons, the Seahawks offense looked like a normal, maybe even good NFL team should look. And guess what? Sidney Rice didn't have a catch.

That doesn't mean he didn't help immensely. With his abilities on the deep ball and in jump-ball situations, the Falcons' defense had some respect for the Seahawks' passing attack. If you look at some stills, as was pointed out in an earlier comments section, the safeties are off the line of scrimmage at fifteen yards in many cases and are helping out and cheating to Sidney Rice's side. Well, that paid dividends for the Seahawks as Tarvaris Jackson spread the ball around to Mike Williams, Doug Baldwin, and Ben Obomanu.

The play below is a good illustration of this effect that Sidney Rice has on opposing defenses.

10:05 in the 3rd quarter, the Seahawks are down 27-7. Mike Williams has just made a 3rd down sideline catch two plays earlier to put the Hawks within the ten, and are now in another big third down situation, with goal to go.

They're in their "12" personnel grouping, with Zach Miller out to the wing left, Anthony McCoy in-line, and Sidney Rice and Mike Williams on the right.

Williams and Rice are going to run a simple crossing route and you're going to see why it's so effective. Ball is snapped. 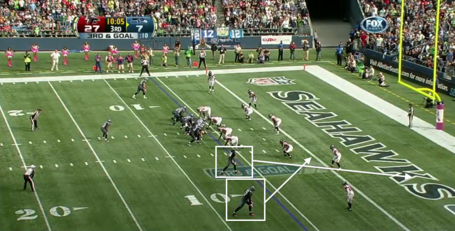 You can see below that the protection holds up and because of Tarvaris' running ability, the weakside linebacker is very keyed in on him (boxed). I suppose this is the nice part of Jackson's reticence to throw the football, and I'm sure they watched film of the Cardinals' game where Jackson ran it in for a score from the 11.

Below, you can see that there is a corner and a safety with responsibilities for Williams and Rice. Williams, on the outside, is going to run under Sidney Rice, who is simply going to the corner of the endzone. This is right about the time where the safety has to make a decision on whom to follow. Guess who he thinks the ball is going to.

The safety decides to follow Sidney Rice to the corner despite the presence of the cornerback there, and leaves Mike Williams wide open in the zone pocket. The weakside linebacker didn't see Mike sneak in behind him because he was too busy making sure Tarvaris wasn't going to run it.

This is simplifying it a bit of course, but this is why it's so nice to have a #1 receiver -- a guy that you can throw it up to and expect he'll come down with it. The Seahawks, lately, haven't been shy about doing this and the Falcons know that Tarvaris and Rice have chemistry. I honestly don't really blame that safety for biting on Rice's route because up until this game, Williams was almost never even being looked at.