Share All sharing options for: Seahawks Game Ball of the Week: Richard Sherman

My game ball of the week goes to Richard Sherman. The Stanford product, via Compton California, was directly responsible for two turnovers for the Seahawks' defense in his first NFL start and showed suprising quickness and physicality at the corner position. Sherman had 3 passes defensed, an interception, and he tipped an Andy Dalton pass to Kam Chancellor for another pick. Considering he started out this, his rookie season, behind Marcus Trufant, Walter Thurmond, and Brandon Browner and is now starting due to injuries to the former two, this is a pretty impressive line.

Making it more impressive is that he was matched up for much of the day against rookie sensation A.J. Green, who despite Sherman's opinion on the matter, has been having a very good rookie season. Rick didn't have a perfect day - he was matched up with Jerome Simpson on a slant route TD pass early in the game, though in that case it looked like he probably should have had help over the middle from Earl Thomas, who had streaked down to take the slot receiver on an outside route. That said, he played much better than I would have expected from a 5th round Draft pick rookie that has only two years of experience as a cornerback after switching positions at Stanford.

Sherman is a former wide receiver (who led Stanford in receptions as a sophomore) and it shows. He tracked the ball well in flight on both of his big plays and had a couple other passes defensed where he knew just where the ball was and put himself in a position to take away the reception.

He tackled well - re-watching the game I took note of his physicality and that's not really something I had expected - and he played with a chip on his shoulder. He was jawing with A.J. Green all day long and called him out afterwords. I don't necessarily think that was necessary, but I do love the confidence and swagger he displays. It's pretty much night and day from what we're used to here in Seattle. I'm not piling on to a good guy and someone that the Seahawks relied on for a few years, but I'm not sure I remember one quote from Kelly Jennings in the media the entire time he was with the Seahawks, and I damn sure don't remember him ever getting in someone's face after making a play on him.

Let's take a look at a couple of Sherman's plays...

2nd and 10, 4:34 3rd Quarter, Cincy up 17-3 and driving into Seahawks territory. If the Hawks need anything right now, it's a big turnover to get themselves back into the game.

Hawks in what looks to be a cover-two with Richard Sherman rolled up on A.J. Green and Brandon Browner on the other side up in press coverage as well. 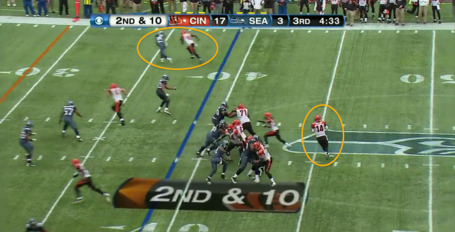 Green gets to the outside for his release and runs a sideline route. Dalton drops back and looks his way. 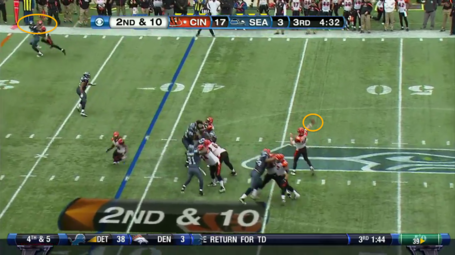 I like this play by Sherman because look at where the football is when Richard gets his head turned around. He's got AJ Green in his hip pocket, running full speed, and now sees Dalton as he is releasing the football. This is not easy, and is something we very rarely see from Seahawks' cornerbacks not named Marcus Trufant.

Sherman knows where the ball is going, and tracks it in flight while running step for step with Green.

Sherman goes up and grabs the pass in a leap. All in all, this was a superb play by Sherman, and the throw was pretty much online for Dalton.

Green didn't make much of an attempt to break up the play though, and this kind of thing won't always be so easy.

3rd and 7, 4th quarter 12:45 remaining. The Bengals at midfield, threatening again, up 17-6. Once again, this is a big place for a stop, and a turnover has the potential to turn the tide of momentum in the Seahawks favor.

I would show you the pre-snap formation if I could but instead CBS was super-zoomed in on Cincinnati OC Jay Gruden's face (and mock turtleneck). The camera cut to the action just about here: 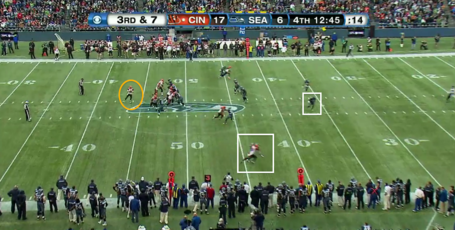 Dalton has dropped back it looks like the Hawks are again in a cover-2 with their corners rolled up in press coverage. This time, A.J. Green gets outside release and actually gets a step or two on Sherman. 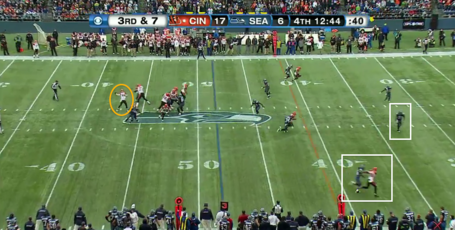 Above you can see Dalton just about to release the pass and Green streaking down the sideline with Sherman in tow. Chancellor has made his break too late here but fortunately for the Seahawks Dalton's throw hangs a little too long and a little too short.

Sherman takes advantage of this. 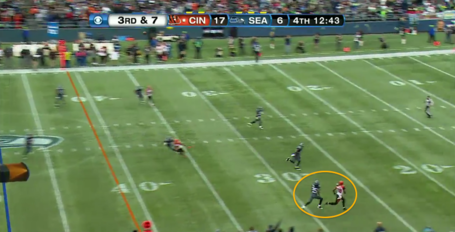 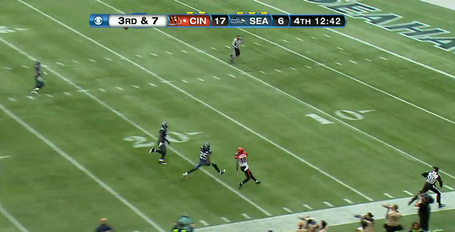 Here you can see that A.J. Green has to hold up and this give Sherman a chance to make the play. For his part, Richard has tracked the ball well again in flight and puts himself in position to break up the pass. 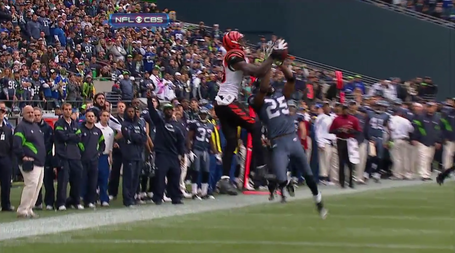 He goes up and makes a play on the ball, knocking it loose and Kam Chancellor comes in and makes the grab. I wouldn't say this was the most amazing play by the Seahawks ever; they got lucky that the pass wasn't on the mark but the point is that they made the most of it. Sometimes the ball bounces your way and I'm not complaining in this case.

Richard Sherman showed the ability to get his head turned around and track the ball, an underrated ability if you ask me, especially considering the amount of P.I. calls we've seen on corners throughout the NFL in general this season, but especially with Sherman's counterpart, Brandon Browner. That's not meant to crap on Browner, who I think has made strides himself this season and has potential to improve, but just to point out that Sherman's ability to do so at this point in his career is encouraging.

As we've said before, the Seahawks defense gave them a chance to stay in this game and ultimately win it. The offense unfortunately didn't get the job done.