There are a lot of plays I could have picked out from this game to break down, but something that stuck out to me, and something I thought was important, was the re-emergence of the much-maligned and/or previously invisible Anthony McCoy and Mike Williams. Now, it's not that they had huge games - Mike Williams had 3 catches for 41 yards and Antony McCoy 2 for 44  - but it was the way they were getting their catches. Which I'll get to in a second.

First, some people may wonder what BMW's role on the offense might be, especially this season. He's started off slow, prior to Sunday had 9 receptions for 89 yards, and has been pretty much invisible. Sidney Rice is the deep threat, big play, do everything receiver. Doug Baldwin is the guy that's going to go across the middle. Golden Tate is the guy you give it to in space and let him run wild. Ben Obomanu your workman backup that can play anywhere.

Mike Williams, much like TEs Anthony McCoy and Zach Miller, are - or should be, in my opinion - first down machines. These are the guys that move the chains. These are guys that present matchup issues because of their size and catch radius. They are redzone threats. They're dependable. You throw to them on 3rd down.

Mike was that guy last year for Matt Hasselbeck but hasn't gotten much attention from Tarvaris Jackson this season, and that was never more apparent than on a 3rd and a few, 1:13 in the first half with a wide-open Mike Williams underneath for what would have been a first down, instead TJack throwing the ball out of the back of the endzone to a double covered Sidney Rice.

For whatever reason - I love the reclamation project story, he seems hilarious in interviews, he's humble and took a small contract - I really like BMW. It also helps that we've seen his potential and why he made the team last year, or glimpses of it at least. Those two 11-catch games last season where he was just playing out of his gourde. First down after first down. Beating up on smaller corners. Making finger tip catches. The infamous First Down Pose.

As for Anthony McCoy - I don't know where to start. One of the guys that I was most excited about in the preseason. Inexplicable case of the dropsies. I don't remember reading that he'd had this problem in college so it was pretty surprising when this developed in preseason and training camp. He certainly looks the part though, and with the combination skillset he has in blocking ability and athleticism to get downfield in a hurry, at 6'5, 260, the potential is through the roof.

Combine that with the skillset of Zach Miller, who has proven to be a pro-bowl caliber blocking tight end, and the Seahawks have a pretty badass versatility on offense.

The Seahawks used two tight end sets (big ups to Chad Davis at Draft Breakdown for compiling those) on Sunday in 28 of 63 snaps (45%!), and having two guys that are considered dual-threat guys makes the job of the defense considerably more difficult. I'll highlight that in a bit.

Now, back to Sunday - between the two of them - Anthony McCoy and Mike Williams, they had five catches. Five of those five catches were for first downs. Let's break a couple of them down.

2:37 in the 2nd Quarter, Seahawks driving. The Hawks are in their 5 WR set here, with Mike Williams out right, Golden Tate in the slot right, Ben Obomanu and Doug Baldwin slot left, and Sidney Rice out left on the wing.

Dallas is doing their Amoeba thing, with only one down linemen and the linebackers are moving and shifting right up to the snap. I'm not sure what this play is called, but it's probably something along the lines of "Hey, let's all meet up in the middle of the field 12 yards that way!"

You can see that the line holds protection well, and the combination of Golden Tate, Doug Baldwin, and Ben Obomanu all running slant routes to the middle really gets the attention of the Dallas linebacker corps. This leaves Mike Williams matched up one-on-one with Terence Newman. 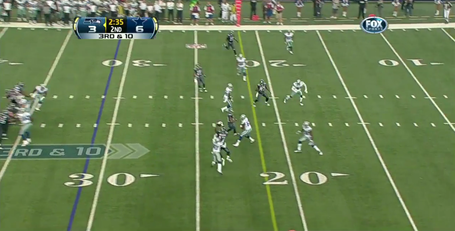 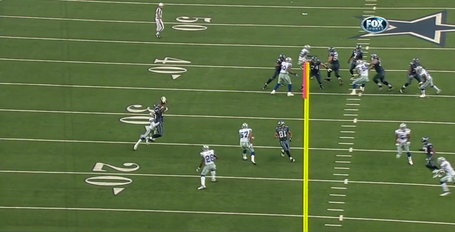 The Hawks are now down 13-6 and trying to put together a drive. On this particular play, two things will help the Seahawks execute a nice slant route completion for 19 yards: a play-action fake, and an in-motion Zach Miller.

See below, as the Hawks are in a two-TE set (Anthony McCoy and Zach Miller stacked to the right), with Rice and Williams on the wings. 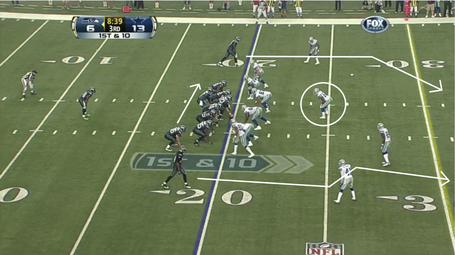 Tarvaris executes the play-action well enough to get the middle linebacker and safety to move in toward the line (with arrows). You can see Zach Miller is running across the formation, and this gets the attention of the weakside linebacker to the top of the screen. This leaves Mike Williams on an island again. I like it when that happens.

Williams runs a slant, the WLB doesn't recover back quickly enough to be anywhere near the action and Tarvaris hits him for 19 yards. 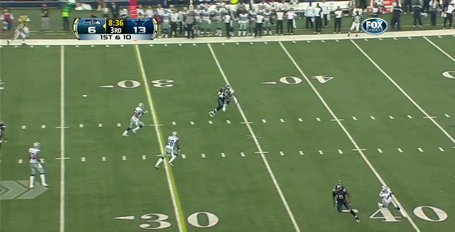 Now, on to Anthony McCoy. As I said above, having the combination of Miller and McCoy out there presents an element of surprise to the Seahawks. You saw this happen every now and again last season with Chris Baker and John Carlson - but for the most part one was a definite receiving TE and one was a definite blocking TE.  With the new personnel, it appears their roles aren't as cut and dried.

In fact, they go a little bit opposite of what you'd think, actually. If I'm the defense, I'm more worried about guarding Zach Miller if he releases downfield, but this season we've seen Miller stay in more to block and act as a fullback. This has meant Anthony McCoy is getting more targets downfield and thus far has been pretty inconsistent catching the ball. On the other side of the coin - I don't think that McCoy has struggled especially in pass blocking, but rather Miller is just so damn good at it, the Hawks have pretty much stuck with him.

2:31 in the 3rd Quarter. Seahawks in 1st and 10 in their own end. Sidney Rice and Ben Obomanu are going to run outside sideline routes and a breakdown in the Cowboys' defense down the middle is going to prove advantageous for the Seahawks.

Remember in my game preview, back on Sunday morning, how I quoted Greg Cosell talking about the Cowboys' problems at middle linebacker? "Well, I don't know if it can be something that can be exploited by Seattle, but against the Eagles it was really problematic. You had (Bradie) James and (Keith) Brooking playing on the inside, and they were both... liabilities. Brooking will be, I'm sure, the starter, James, he's been a starter, I think both of those guys lack speed, lack movement."

On this play, they lacked awareness too. I wish we would have attacked this more, but what can you do. 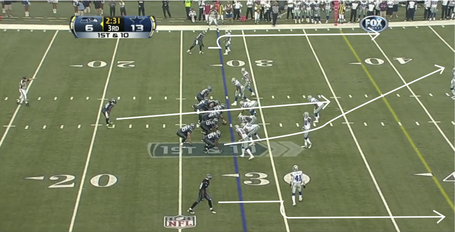 Ball is snapped. The Cowboys are in a zone here and evidently just don't see Anthony McCoy come out of his stance and head downfield. 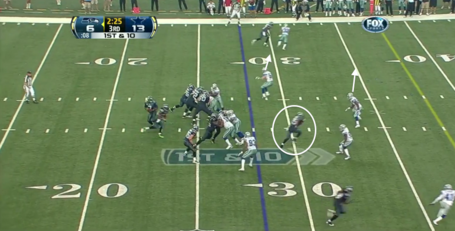 You can see that the weakside backer and middle backer head to their right, mostly into no-man's land, and McCoy sneaks in past them. 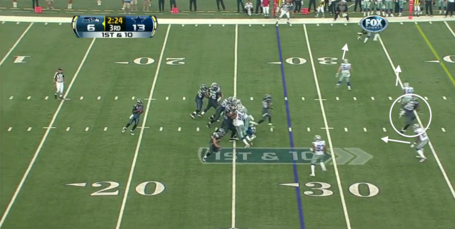 After that, the safeties are playing so far back in respect to Sidney Rice, a 10-15 yard bubble of no-one opens up and Tarvaris hits McCoy there. I'd say this is actually pretty similar to the breakdown the Seahawks had on the Jason Witten 33-yard TD catch.

(The shot cut away but he did the BMW "firssssst dowwwwwn" pose.)