I was not fortunate enough to see the Seahawks big win over the Ravens.  When I joined Field Gulls, I made a commitment to myself to make sure I see every game.  As a resident of Greater Los Angeles, and as a middle-class American who is just trying to keep up on his bills, that means I have to go down to the bar to watch every game.

Don't tell me that you're surprised that the Hawks don't show up on national television, or even west coast television, very often.

At least, that's what I thought.

Extenuating circumstances, ones that I had not ever planned for, got in the way of me going anywhere on Sunday.  You never realize how close you are to the unexpected.  How planning is smart but predicting is impossible.  We do the best we can with the circumstances we are given in the moment, but the moment changes from second to second.

You just never know what's really going to happen next.  And I was unable to make it to see the game.

The Ravens, they didn't know what was going to happen next.  Few people outside of the Seahawks organization did.  The prognosticators, the writers, hell even the Hawks fans, figured this was an "L" all season long.  The Ravens planned for it being a victory, careful construction of a team that looks like it could be the class of the AFC.  But prediction is futile.

"Any given Sunday," and "That's why you play the games," seem like mere cliches used to stir up hope where none existed before.  Then they seem to fit in perfectly like the newest member of Menudo.

I'm happy that I can sit here and write this article today.  Super happy about that.  But alas, I did not see the game, merely watching it now, far after the fact that it was complete.  I have no bar notes, I had to follow along like the rest of the caveman of modern america: on the internet and on my phone.  These blasted neanderthal devices!

The 90's seem like such a bland decade.  Coming right after the coke and dance party known as the 80s, not much in the nineties seemed like it was revolutionary.  As each decade before seemed to either have the charm of the fifties, the fight of the sixties, or the pretty colors and crazy baby names of the seventies, what did the nineties have to say for itself?

Nothing I guess.  Except for the rise of the greatest invention/discovery/implementation of man kind: the internet.

And the greatest page on all of that world wide web, the thing that would become the most powerful entity on the most powerful form of communication was Google.  I had no idea that when I was in high school and our teachers said to use "Google" instead of "Lycos" or "AOL" or "Alta Vista" for internet searches, that they weren't just being kooky old bats.  They knew what was up.

So I was left to follow the game on the internet, and I can't do anything without Google when I'm on the web.  Here are Google searches I did as I got updates on the game.

Start of the game, three and out:

Certainly seemed like this would be a long day from the outset, and going nowhere to start the game seemed like a precursor of things to come.

Not that Billy Cundiff is a bad kicker, or that 50-yard field goals are gimmes, but it is funny that Steven Hauschka was playing against his original NFL team and the new guy was 0-for-2 from 50+ yesterday.  He is 1 for 6 on the season.  When Hauschka was with the Ravens, he went 5 of 7 on kicks that were 30-39 yards and 3 of 5 on kicks that were 40-49 yards, so it's not surprise that he wasn't seen as the "KOTF" for the Ravens.

But today would be his day.

He would share the day with another guy though:

Everything about this is perfect: 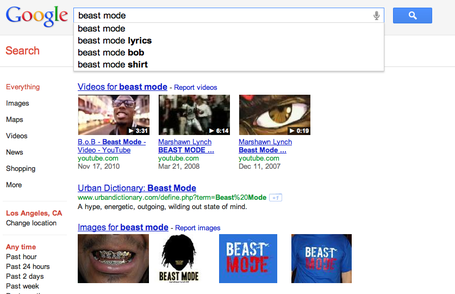 What if the Seahawks wind up at 5 or 6 wins, clearly not a playoff team by anyones aspirations as it is, and then are left with the question of whether or not to attempt to re-sign Marshawn Lynch?

It's not that I don't want Lynch to stick around.  I would LOVE Marshawn Lynch to stick around.  But have you noticed what Chris Johnson has done this season?  Have you noticed what third-round pick and super-cheap DeMarco Murray has done this season?  This is the best, by far, that we've ever seen Marshawn play.  He's shown all of the ability, all of the heart of getting an extra yard or two, that people have been expecting from him since he was drafted.  But he's sure picking a hell of a time to do it.  How much guaranteed money do you honestly commit to a player that wait until the middle of his contract year to start being the dominant force that we were hoping he would be when we acquired him?

There was a lot of praise given to Marshawn from Ray Lewis and other Baltimore Ravens before the game.  Would they be willing to cover his guaranteed money?  I'm not sure that the Seahawks shouldn't allocate that money to other areas and draft a running back next year.

Notice what I typed and what Google added on:

Much like what transpired against the Giants, the Hawks failed to fully capitalize on this opportunity, and instead had to go for a field goal after they got down to the Ravens four.  It certainly doesn't seem like you'll pull a major upset with missed opportunities.

The ensuing drives included the Hawks playing good defense to force a punt.  And then two penalties on James Carpenter plus a personal foul penalty on Mike Williams (from the highlights, it looks to me like, I don't know.. everybody was being a jerk so maybe don't throw a flag?) that forced an eventual punt.

Overall, the Seahawks offense and defense was looking decent to pretty good.  Up until that point.

Just in case, I wanted to know what to do:

It didn't result in a touchdown, but Hauschka hits #2 and its 13-7 Seahawks

The Hawks then forced a three-and-out and after a terrible punt, were starting on the Ravens 42.  Let there be no mistake about it, the Hawks played some exceptional defense in this game and Marshawn Lynch was full-on beast mode.  In addition to that, the Hawks lose if they have a lesser kicker or maybe if Billy Cundiff was that exceptional kicker.  That being said, the Ravens sure lost the hell out of this game.

When speaking a few weeks ago about this game, Thomas Beekers rightfully commented that the Hawks weren't going to win this game unless Joe Flacco had a bad game or if the Ravens just made some horrible mistakes.  (I'm paraphrasing, correctly, I hope.)  And they sure did funk this up.  They nearly lost when they gave extremely short field position to the Cardinals in the first half of that game.  Same story here in the first half.  Short-ass-fields.

The Hawks went for it on fourth-and-one on this drive, but later on when it was fourth-and-inches they elected to kick the field goal.  This was the right decision, don't press your luck.  When you "get away with one" just be grateful that it had some meaning.  Getting stuffed on fourth-and-inches would have hurt.

Take it to the Hauschka: 16-7 Seahawks

I wasn't in a motel room, but let's just say you wouldn't want to blacklight my space up in here.  Not after the Ravens gifted the Hawks another extremely short field.  The Ravens clearly wanted us to be up by 20 or more points, but it was more Hauschka time and the Hawks went up 19-7.  Billy Cundiff was not good from 52 and that's your first half

I said in my poem on Friday that David Hawthorne would get a pick.  It doesn't matter if the rest of my poem was mostly wrong, I insinuated that Hawthorne gets a pick! So there.  He should have gotten 8 more yards, but you'll take what you can get.  I still searched for this:

More Hauschka.  22-7 Seahawks.  There would be no more Seahawks scoring.

There wasn't much going on for an internet viewer of phone follower for much of the rest of the half.  The Ravens kicked a field goal to make it 22-10.

Midway through the fourth quarter, Joe Flacco was leading the Ravens on a drive that they needed a touchdown on if they were going to stand a chance to win.  A fourth down scramble by Flacco on fourth down.  A third and ten conversion on a five yard defensive holding penalty.  A fifteen yard penalty on a Kam Bam Bam on Anquan Boldin.

For the most part, we were still outplaying, or nearly outplaying, the top team in the AFC.

This started out as "Does anyone care about Ed Dickson?" but then Google clearly knew how to get at me with auto-correct.  Damn you Google.  What other secrets of my deep psyche are you trying to get at.  I hate you.

No wait, I don't mean that, I love you Google.  I swear, I only ran into Yahoo! at Starbucks.  Nothing happened.

In all seriousness, it seemed like this touchdown to Ed Dickson was going to be a momentum changer.  The Ravens had pulled to within five points and they were handing the ball over to the strong side of their team: their defense.  For over a decade, the Ravens have relied on their defense to win them games.  No matter how tall the obstacle of their offense is, the defense many times has found a way to win.

If all goes to plan, they'll force a three-and-out and then give the offense the ball near Seattle territory with over four minutes left in the game.  Plenty of time for Flacco and Ray Rice to put it in the end zone for a victory.  What happened instead was certainly not planned, most definitely unexpected.

The Hawks rushing offense was better than the Ravens rushing defense.  Even if it was only on this day, only on this field, only with this specific set of players, this was not supposed to happen.  Seattle running off the last 5:52 in order to win the game was the last thing you would have expected.

A player is not supposed to fumble two kickoff returns.  A team is not supposed to kick five field goals instead of getting a couple of touchdowns inside the 10, and beat maybe the best team in the AFC.  The Seahawks are not supposed to be able to put up 327 total yards of offense on the league's best defense.  That's more than they put up on Arizona, and it includes the fact that they started inside Ravens territory four times.

Nothing about Sunday was "supposed'a"  Everything was planned, but on this day the Seahawks plan worked better.  The Ravens couldn't plan for mistakes.  They could prepare, but they were not prepared to handle all of this.  I'm not going to say that Seattle is better than Baltimore, that would be foolish.  But sometimes you have to be lucky and worry about being good later.

I didn't plan to miss the game this weekend, but I'm lucky that I get to be sitting here and writing this today.