Share All sharing options for: The Worrying Lack of Seahawks Pass Rush

I did a writeup a while back on what I felt are the matchup strengths and weaknesses of this particular Seahawks defense. This wasn't a criticism of Pete Carroll's defensive system, which I really do not feel strongly about one way or the other, but mostly to focus in on what we do well, and looking for explanations why our defense looks strong one game and weak another. Not all run-based, dink-and-dunk offenses are easy to contain. We held Atlanta to a pretty meager 5.3 yards per play, even if they did score on us well, and this defense did really well against the Bengals, which isn't easy. But at the same time, Eli Manning passed for 10.8 YPA, Ben Roethlisberger for 9.9 YPA and Tony Romo for 9.0 YPA against us, all well above their average performances of 8.4, 8.1 and 8.1 YPA. The Cowboys are a proficient offense, but when I say we have a hard time against deep passers I'm not talking about a lack of ability to stop the truly elite, I'm saying that anyone who passes even passably well deep is making this mediocre defense look bad. The fortunate bit here is we don't face a lot of those, only three so far and only Chicago and the inconsistent Philadelphia team left.

I've focused on the cornerback spot for a long time. But after our depth has held up well following two key injuries, and with our high-level safety play making up for a lot, it's become pretty clear our secondary isn't our biggest problem. The search for why our defense works like it does seems to start and stop at the inadequate pass rush. When you build your defense with cornerbacks jamming receivers and linebackers roaming the flats more extensively than last year, you disturb the short passing options well. But - somewhat separately from that - the problem comes in with the longer passing option, with our corners' relative weakness in keeping up with longer, complex and faster routes. If you don't get to the quarterback, that means trouble. We have 14 sacks on the season, good for 30th in the NFL, five from Clemons with no other player having more than one. Sacks are mostly a result stat, it's about getting the passing offense off its rhythm and forcing the quarterback to take poor decisions, which is a tally of hits, hurries and sacks. We're just not getting there.

Field Gulls member-but-sadly-not-writer Jacob Stevens has been noting in the comments for a while now that the defensive shift in gap assignments from last year sees the 1-tech (then Colin Cole, now Brandon Mebane) 1-gap, instead of 2-gap. That means that where we had two 2-gappers and two 1-gappers last year we now have one 2-gapper in the strongside defensive end and three 1-gappers in the rest. I think that's closer to what people expect when they hear "Carroll is a Kiffin disciple", since the Kiffin model is all about shooting gaps and letting linebackers worry about gap containment (though our cap discipline isn't great, as the Ravens showed in beating us with a few end-arounds to start the game). That said, it leaves a lot unchanged: the pass rush still has to come primarily from the weakside or "Leo" end, and the 1-tech is still supposed to draw double teams to free up the 3-tech. But out 3-tech is a more run-oriented position than you'd expect, filled by a big body as it is. Just a temporary solution until we hopefully get a decent-to-good 3-tech? I dunno. Our Dline is still fairly patchwork, there is no PC/Schneider drafted player who makes a steady contribution to the Dline (though Pep is knocking on the door), whereas the linebackers and secondary have various rookies and sophomores from the draft. That makes me think we're still looking at a stop-gap mix on the line, even with younger players in the rotation.

Is a shakeup of the defensive line rotation in order? I find that harder to say. This doesn't seem to be a problem where a single player is to blame, but primarily a combination of lack of interior push and Clemons disappearing for stretches. Clinton McDonald is getting more playing time which I think is good, as he has value as a specialist. Raheem Brock is seeing more snaps but we're not seeing anything close to his late-season explosion last year. In fact, he was mostly invisible this last game. Do we need better blitz packages? Blitz packages can never replace front-four pressure, just supplement it. One thing I would definitely like to see less is Earl Thomas blitzing. Not because he's bad at it, his speed and small size give him a good shot at the quarterback though he's also chipped out easily. But rather, I think it's counterintuitive to take out the best player of your secondary to hit the quarterback. What's better, having Kam Chancellor in single high and ET blitzing or vice versa? The answer is pretty obvious. I like Kam, but he doesn't have nearly the range or instincts of Earl Thomas. So, less of that please.

This last Seahawks game might not be the ideal example, because we put in a ton of pressure packages that we normally wouldn't, due to the Ravens pass-heavy offense. This included regularly lining up Raheem Brock, putting Clinton McDonald on the field a lot, and kicking Red Bryant inside when Raheem Brock was in. And yet we still couldn't get to the quarterback, creative and pass-attuned defensive packages notwithstanding. What's more, the Ravens did not frequently keep in a tight end to block, their offensive line was enough to generally handle our pass rush. Here's a few good and bad plays:

Seahawks have Raheem Brock (98), Anthony Hargrove (94), Alan Branch (99) and Chris Clemons (91) in, with David Hawthorne (57) and Leroy Hill (56) threatening the line. Ravens in shotgun with four WRs and a running back in. Five rush with Chris Clemons dropping back. The left tackle takes out Branch, the center David Hawthorne, the right guard stops Brock as he stunts inside, the left guard is left with little to do. The play breaks down for the Ravens on the other side. Brock stunting inside freed up Hargrove to go one-on-one with their right tackle, and Hargrove gets his hands right on the tackle's numbers, pushing him aside and then flying almost free at Flacco, who scrambles to his right. In the meantime, Hill is cut by Ray Rice, which bought Flacco a little extra time, but Hill is up and back on the quarterback fast, which forces Flacco to take the quick outlet pass to Rice. Excellent play by the Seahawks. 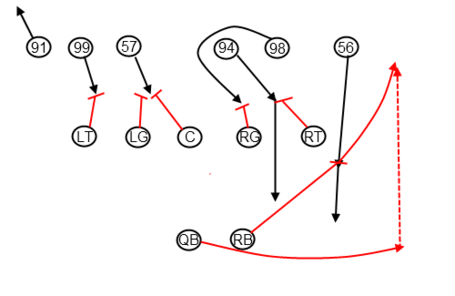 Seahawks in base, Ravens with a tight end in on Chris Clemons' side. The Seahawks rush four. Clemons is moved into the LT by the tight end, Branch and Mebane are in kind of a cluster with the interior line (I think the center actually has a hand on both). Red Bryant is isolated on the right tackle, and is held at the line of scrimmage before swatting away the RT's arms and coming at Flacco. Not a load of time for Flacco, but Torrey Smith beat Sherman with a simple comeback on the sideline.

The Seahawks are in a dime formation. Brock, Hargrove and Clemons are the down linemen, with 2 linebackers and six defensive backs (so 3-2-6). Atari Bigby is near the line but drops back. Leroy Hill blitzes, as does Roy Lewis from the slot corner spot. Ravens are in the shotgun with splitbacks, Ray Rice releasing as an outlet while Dennis Pitta (on Flacco's right) stays in to block Roy Lewis, who is coming in with a full head of steam. This would look good if not for Hargrove and Clemons overruning themselves and getting walked out by the tackles. As Flacco as throws, only Brock being blocked by the center and right guard are still in front of him, the rest of the blocking is to his side or behind him. Hargrove is credited with a pressure here but I don't even think Flacco saw him - just to his right as he throws - he simply threw a bad pass to Torrey Smith.

Seahawks have Raheem Brock, Lazarius Levingston, Alan Branch and Chris Clemons in. Brock tries to stunt inside but the RG picks him up well, leaving Levingston fight a double team while Brock moves. Branch is single-blocked out by the LG, and Clemons tries but fails to spin-move past the LT. Enough time for a deep pass.

Seahawks are in nickel with the Ravens lining up four wide receivers. Seahawks line up Brock, Levingston, Branch and Clemons. Branch takes a step forward and then drops back into coverage. Both the center and left guard had their eyes on Branch and take a second to adjust. The center helps the right guard with Levingston, while the right tackle handles Brock, who releases off the block to try to stunt around. Clemons battled past the left tackle, with the left guard adjusting too late to help him out, and he is right in Flacco's face as the quarterback throws the pass.

Seahawks line up Brock, Branch, Bryant (at the 3-tech) and Clemons. Branch is stood up by the center. Bryant actually bulls the left guard well but the guard gets enough of him to walk him just past Flacco, so he can't get a hit in. Brock halfheartedly spins in front of the right tackle and then runs behind Branch to nowhere. Not sure how much of it was by design by Brock's late stunts looked very ineffective. Clemons spins himself both out of the left tackle's block and out of the play.

Seahawks in 4-1-6. The pocket collapses fast here, primarily due to Red Bryant rushing out of the 3-tech, who absolutely mandhandles a doubleteam by the right guard (who falls down trying to block) and the center. Possibility for a sack here if not for coverage breaking down. Roy Lewis is in man on Pitta from the slot, but bites on the tight end's stutter-step, losing him on the slant. Chancellor doesn't pick him up though he's right in position, and the Ravens get an easy completion that could've gone even further if not for a nice form tackle from free safety Chris Maragos.

Brock, Clinton McDonald, Branch and Clemons are in. McDonald draws a double-team, Branch is nicely handled and Clemons hasn't even really been engaged by the left tackle yet when the ball is thrown. But on the other side, the right tackle tries to shovel out Brock but either mistimed or mishandled it because Brock runs right past him, and even though this is a 1-2 second slant play he still nearly got to Flacco.

Brock gets right around the right tackle again, but Flacco has a pretty clean pocket to step into as Bryant and Branch get nothing. Another poor throw by Flacco.

Seahawks line up Brock, McDonald, Bryant and Clemons. Clemons drops back while linebacker Malcolm McCoy rushes between the two defensive tackles. The left tackle does a good job on Bryant who soon gives up the rush to reach up for any possible passes. Brock is walked around Flacco by the right tackle. The running back (Ricky Williams) picks up McCoy perfectly, which leaves the entire interior line to triple-team McDonald, who consequently doesn't do much. As Brock is moved to Flacco's left, the quarterback bootlegs right, and throws an imperfect but catchable pass that Earl Thomas knocks down.