Share All sharing options for: The Seahawks' Offense and Explosive Passing Plays, Part 1

The Seahawks struggled to create big plays early in the season. They generated only four explosive pass plays (while some metrics count a 40+ pass as an "explosive play," I'm going to use 20+ as the standard - and I believe that's what Pete Carroll uses as well) in the first three weeks, leading to questions about where this offense was going with Tarvaris Jackson at the helm.

Then the offense took a temporary turn for the better in Week 4 against Atlanta, as Seattle generated five explosive pass plays - including a 52-yard bomb to Sidney Rice for a touchdown and a 30-yard shot to Doug Baldwin.

Jackson and Charlie Whitehurst split duties in Week 5 because of Jackson's injury, and the offense slowly stalled until Jackson re-entered the equation in the second quarter of Week 8 versus Cincinnati. Again, Seattle had five explosive pass plays, - including 55 and 32-yard strikes to Ben Obomanu, and a 35-yarder to Sidney Rice - and they've continued to gain chunks of yards in the past two weeks.

Against Dallas Sidney Rice caught a 43-yard pass from Jackson and Anthony McCoy got in on the fun with a 31-yard reception. Last week, Doug Baldwin had a big 50-yard reception that Danny broke down here.

After 8 weeks Seattle was able to shake early season stagnancy and begin to consistently gain chunks of yards through the air, and maybe this happens sooner if Jackson doesn't get hurt. Just for comparison - in 2010, Matt Hasselbeck had 33 pass plays of 20 or more yards, with ten of those going for 40-plus, while Jackson currently has 23 plays of 20 yards or more, with five 40-plus pass plays.

The super slow start in 2011 and Jackson's injury must be accounted for as well. Even though Seattle's passing game is ranked in the bottom half of the league in many statistical categories, they are on pace to eclipse last year's number of explosive plays. If Jackson doesn't get injured Week 5 it's possible he's currently very close to Hasselbeck's 20-plus total from last season already. Anyway...

While the recent step forward in the running game is not something I'm going to highlight, I think the running game success and these big plays are connected. The Seahawks have started to pound the rock. It's easier to run the ball when you are creating big plays through the air, and in a variety of situations. The defense has to adjust and big play opportunities arise if you can find the right matchups.

In the Shutdown Corner Week 10 podcast, Doug Farrar asked Greg Cosell about teams winning a Super Bowl with a 'run first offense' instead of a 'pass first offense'.

Doug Farrar: "Can you win a Super Bowl these days with the pass as, if not a secondary option, kind of a 1A thing?"

Greg Cosell: "Yeah, because I think what it comes down to, is generating explosive pass plays, Doug. As long as you get to that, and can do that, then you can, for sure.

Let me make this analogy, in boxing, let's say. The object, obviously, is to hit the other guy in the chin and knock him out. To do that, you don't just come out and start swinging freely. You try to set that up, and maybe you use some jabs, maybe you use some body shots, and then, you can hit him on the chin.

As long as you can throw the ball, and generate chunks of yards in the pass game, that's the important point. You don't just have to come out in 4 or 5 wide spreads and just start winging it."

I liked the comparison to boxing, saying a fighter doesn't step into the ring looking for the knockout blow to the chin (except maybe Mike Tyson). He sets it up. The running game and dumpoffs are the jabs or body shots; the explosive passing game is the shot to the chin, or the knockout blow. The haymaker. I'm going to take your head off the second you let down your defense.

We've heard the Seahawks talk about the importance of staying ahead of the sticks or out of third and long, the goal being to keep the offense on schedule. This first play, the 43 yard Sidney Rice pass reception against Dallas, noted above, shows the Seahawks doing exactly this, with the added bonus of digging themselves out of a major hole on second and long.

This play occurred on the Seahawks' second drive of the second half. The first series consisted of four straight runs - a fifth run was negated due to a holding call - and then an incomplete pass on third down. The first three plays of this second series were a slant for a first down, a run for no gain and a false start. Officially, five of Seattle's seven non-fourth down plays before this bomb were runs.

While this particular play doesn't exemplify Cosell's notion of not needing to go four or five wide, it does play into the idea of setting up the big play. This is the first play of the Week 9 second half where Seattle used a 4-plus receiver formation. Seattle played it conservatively - up to this shot -, with run, run, run, run, incomplete pass, (punt), short pass, run, then threw the haymaker.  Lull the defense into defending the run until it was time for whammy! 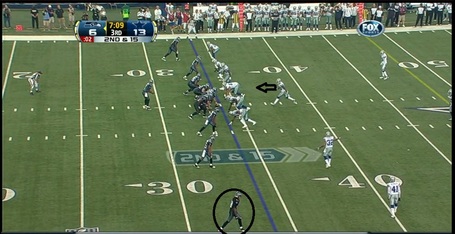 Seattle is in 5 wide. Rice is circled at the bottom, as he will eventually get the ball. The Cowboys are in what looks like a 7 DB formation, with a 2 deep zone and mostly man to man underneath. The arrow shows that the safety is currently on the move in towards the line - the one underneath DB not in man to man - as the bottom slot receiver is uncovered. 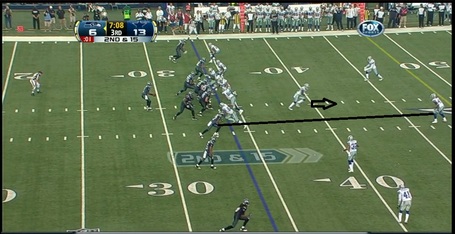 At the snap we see the safety retreating in a dead run back...aha, Dallas was trying to trick Seattle with a pre-snap look. The safety at the top of the screen will sit basically where he is, and the bottom safety has a line drawn to the receiver he will eventually pick up. The retreating safety is responsible for covering deep. His race with Sid Rice begins. 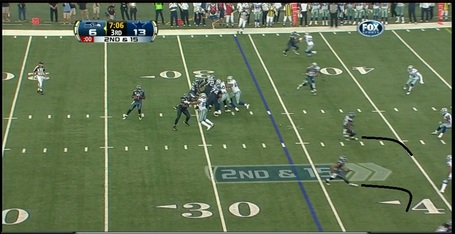 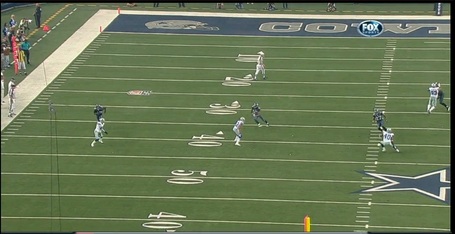 ...Rice will have the entire side of the field to work with. Note the defender at the top, right of the screen with his hands up. 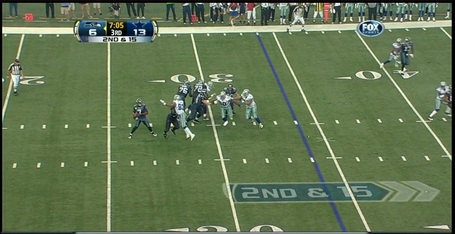 That's because Jackson has identified the hole downfield, but has to negotiate the rushing end. A pump fake towards the two right-side underneath receivers does the trick. 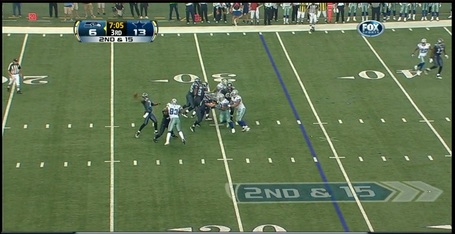 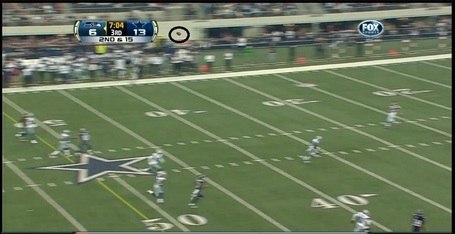 The ball is circled. Rice beat Terence Newman 1 on 1, and the safety in the middle of the field needs a Nos boost to get to Rice. 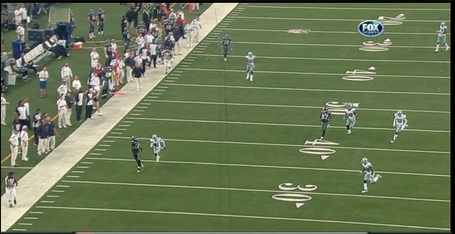 Credit Jackson for identifying the coverage, drawing the end off his feet with the pump fake and finding the throwing lane. Jackson makes a nice throw towards the sideline, rendering the safety irrelevant and making it tough for the man in coverage to make the play. 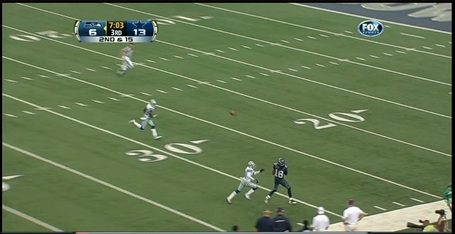 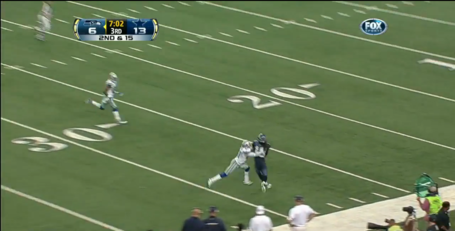 Rice goes down at the 23. Unfortunately Seattle squandered a scoring opportunity and had the field goal blocked on the upcoming 4th down. However, the point here is to show how Seattle took a calculated shot downfield in a situation where an explosive-type play was needed to gain the first down in one chunk. They used recent play calling to their advantage, and spread it out with the intention of landing a knockout blow.

In part two we'll take a look at an explosive play Seattle created in Week 10, one of the 20-plus variety Pete Carroll speaks of often. This one occurs in a very different situation, is created using a different set up and provides a contrast in showing how an offense can manufacture explosive plays.