Share All sharing options for: Seahawks Game Ball of the Week: Marshawn Lynch

I don't think there's much doubt that Marshawn Lynch earned this week's game ball with his steady, effective, and tough performance on Sunday against the Ravens that helped the Seahawks get a big win. Lynch rushed 32 times for 109 yards at a 3.4 yards per carry clip and caught 5 passes for 58 yards to lead the Seahawks in receiving as well. He accounted for over half of the Seahawks total offensive yardage and set the tone there with his relentless and resilient running.

The 3.4 yards per carry doesn't look super impressive, obviously, but the steadiness of how he ran and the times he broke free are what made his game so excellent. That was never more apparent than late in the fourth quarter as the Seahawks attempted to grind away at the clock and force the Ravens into using up their remaining timeouts.

The Seahawks had taken possession of the football with 5:52 remaining after the Ravens scored on an 11-yard touchdown pass by Joe Flacco. This diminished the Seahawks' lead to within one score at 22-17. Despite starting the, hopefully, game-saving drive with three consecutive penalties (really awesome, guys), the Seahawks managed to make a few big plays - and make no mistake, that's what good teams do when they need to win, make big plays - to put themselves at midfield.

Darrell Bevell called Lynch's number twice in a row on first and second down, gaining five yards  and putting the Seahawks on the Ravens' 46 yard line. It was now third down and a long five yards with 3:10 on the clock. The Ravens still had all three of their timeouts and plenty of time to mount a game-winning drive. Gulp.

3rd and 5 - Golden Tate is going to get outside and run a sideline streak route. Anthony McCoy is the h-back, and he'll feign a lead block as the Seahawks execute a play action fake. The Ravens bite on it, thinking the Hawks are content to just let the clock keep running and depend on their defense to make a stop. 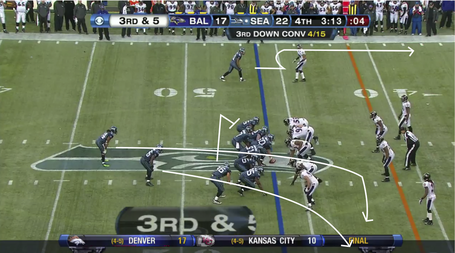 You can see below that all four of the Ravens behind the line and a fifth defensive end to the left bite forward on the play action and Marshawn Lynch will crash hard through the line on the fake. 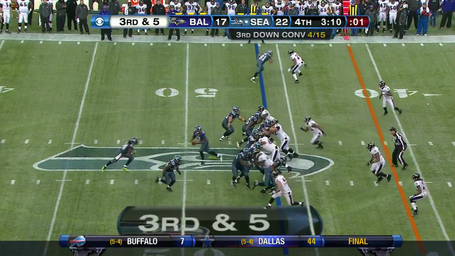 Because the fake worked so well and because the defensive end to the strong side stuck with McCoy on the shallow out-route, there is now some room underneath for Lynch to take Tarvaris Jackson's pass, which he does.

Lynch catches the pass and looks to move upfield to pick up those two extra yards for the first down but is faced with Ray Lewis and Jarrett Johnson ready to stuff him in his tracks. And then Lynch does this...

See another angle here, with big thanks to BigTrain21 for putting these gifs together. A HUGE, huge first down for the Seahawks, on the nifty ankle-breaking juke by Beef'moe.

Now, the Hawks weren't completely out of the woods at that point. Lynch runs on first down and there's still 2:21 on the clock after as the Ravens take their first timeout. He then does this...

Credit goes, obviously, to the Seahawks offensive line (all day), but this play typifies Lynch's performance on Sunday. Grind, grind, grind. Lynch picked up the first down here, the Ravens challenged it and lost - their 2nd timeout - and there was now 1:59 on the clock. The Ravens had only one timeout remaining as Lynch's number was called again, and he took the handoff for 7 yards.

The Ravens called their final timeout with 1:54 on the clock. Next play, Lynch proceeded to rush for another first down because, well, why not? Game over. Give that man the game ball.