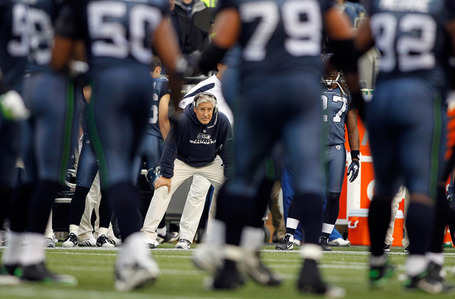 The Seahawks' defensive linemen and their respective responsibilities have been common topics in recent threads, and in this case, there was a bit of confusion regarding the strengths and weaknesses of a 3-4 defense compared to a 4-3. I agreed with jacobstevens' comment, but like him, wasn't completely sure if I was correct, so I did some more research, and thought I'd share it with you guys.

To begin, I will clarify some terms, for those that are as yet unaware of some of this new-fangled defensive lineman terminology.

The phrases "one-gapping" and "two-gapping" are thrown around quite a bit. They refer to the defensive lineman's responsibility off the snap. If he is two-gapping, he is responsible for controlling anything that tries to pass through either of the two gaps in front of him. In the run game, he must control or redirect any ballcarrier in either gap. If it's a pass play, this goes out the window a bit, as his primary responsibility is then to rush the passer. This split second of hesitation can seriously impact a pass rush. Just as you can read run or pass on an offensive lineman by looking at his head (down = run, up = pass, generally), a D-lineman's head usually gives him away. Head up generally indicates two-gap responsibility.

You can probably guess what one-gapping means. The lineman are usually head down, and their responsibility is shooting their gap, tackling or redirecting, and otherwise pinning their ears back for the QB. Obviously, one-gapping is a lot easier and requires less discipline. It's just one responsibility: control your gap, and get 'em. It's proactive. The onus is on the offensive lineman to guess your gap and stop you. Two-gapping, on the other hand, is a reactionary game. The offense acts first, revealing their attack, and the onus is on the defensive line to react accordingly and control their gaps.

This has nothing to do with bets, though if I were betting on a defense, I would typically put my money on the 3-4 (Brian Burke has an interesting couple of articles detailing the advantage a 3-4 defense has provided historically). Rather, 'over' and 'under' refers to the actual alignment of the linemen and 'backers. The 4-3 obviously consists of four down lineman (three or four point stance) and three linebackers, and the 3-4 is the opposite. In an 'over' formation, the lineman in a 4-3 and the linebackers in a 3-4 will be shifted over the offense's strong-side -- that is, the side with the tight end. In an 'under' formation, that will be reversed, with the strength of the defense over the weak side of the offense.

This has been covered elsewhere, and these terms are used quite often, so I'm guessing that I'm mostly just preaching to the crowd at this point. However, just in case...

The most relevant numbers to remember here are 0-tech, 1-tech, 3-tech, and 5-tech.

So what does all this mean for the Seahawks? Well, to quote the esteemed Mr. Stevens, the 'Hawks' defense is currently a

only the strong-side end has 2-gap responsibilities [though] sometimes it’s 1-gap across the front 7.

In English, this means that there is usually four down-lineman aligned over the weak side of the offense (away from the tight end) and tasked with each shooting a single gap, though sometimes Big Red Bryant is two-gapping. The linebackers are shifted over the strong side, and often the Sam 'backer (or the strongside linebacker) creeps up to the line. Much like this:

Big Red is the "closed end" in this picture, and according to Jacob, he sometimes has two-gap responsibility, meaning he's responsible for the strongside B and C gaps. This frees up the Mike (typically Heater) to roam and be homicidal elsewhere. Alan Branch is the starting 3-tech, responsible for the weakside B-gap. Generally you want your 3-tech to be disruptive and adept at rushing the passer, but Branch doesn't really fit that type. He's a huge hog, like Red, so he's much better at stuffing the run and occupying blockers. Clemons is the Elephant, or the "open end" in the picture. He isn't a pure 4-3 defensive end, in that he often rushes from a two-point stance like a linebacker -- but I'm getting ahead of myself.

First, comparing a 4-3 to a 3-4 in terms of strengths and weaknesses.

As jacobstevens and shams said, the 3-4 is built to stop the run. This seems counter-intuitive, since it seems that running against three guys would be easier than running against four. However, the 3-4 defense removed a larger lineman and substituted a smaller but faster linebacker to combat faster, more athletic running backs who could out-juke and out-run most defensive linemen. Most 3-4 defensive lineman are two-gappers responsible for occupying blockers and space, freeing up the quicker, faster linebackers to clean up. This is why 3-4 linebackers often lead the league in tackles (Patrick Willis, Lawrence Timmons, Brian Cushing, DeMeco Ryans, Ray Lewis, Paul Posluszny, London Fletcher, etc).

Look at the teams that have been terrific against the run, especially recently: the Packers, the Cowboys, the 49ers, the Ravens, the Steelers, the Jets. All of them run 3-4 defenses. According to DVOA, here are the top ten run defenses for 2010, with each team's corresponding scheme:

So out of the top ten teams, six (and a half) ran a 3-4 defense. I'll admit, this is a slightly misleading statistic, considering three of the bottom four run defenses also ran 3-4 schemes. Also, of those 3-4 teams in the top ten, four (PIT, BAL, NYJ, & NO) were also top ten pass defenses. You could interpret this to mean they were elite defenses, transcendent of scheme, or the 3-4 is a really really good defensive scheme! Either way (brace for the truism!), elite talent will always create elite defenses.

Another truism: generating pressure against five offensive lineman is harder with three guys than with four guys. Therefore, 3-4 defenses typically rely on creative blitzing to pressure the QB. As the three big boys up front are busy occupying their blockers, LBs and DBs are free to stunt and blitz, bringing pressure from all angles at different times. This unpredictability can fluster the crap out of even the best QBs.

However, a fast-paced West Coast offense can still give a 3-4 headaches with timing routes completed before a blitz can affect a QB or quick passes into the zones abandoned by blitzing linebackers. This necessitates physical, aggressive cover corners who can play effective press-man; rangy, athletic, hard-hitting safeties to control the middle of the field; and large, fast linebackers who are both talented blitzers and effective in coverage. By jarring receivers off their routes and disrupting the offense's timing, the defense forces the QB to think on his feet and make multiple reads. Any QB who can't do this will almost inherently struggle against such a defense. He may begin to instinctively look to his tight ends. But after getting blown up across the middle by an enforcing safety, that tight end is going to be a lot less willing to run routes out in the open where his QB can easily throw to him. Finally, if the checkdown options are shut down by fast rangy linebackers, the QB is faced with either forcing a throw or tucking and running. Either way, defense wins.

I said in this post that the Seahawks' gimmicky defensive scheme actually reminded me more of a 3-4 than a 4-3, and I continue to beat this drum, especially as I've looked more into the surrounding defensive philosophy of the 3-4. There are certainly distinct details that set our scheme apart from a prototypical 3-4. As I said before, rather than two-gapping with Bryant, 'Bane, and Branch, the former often two-gaps and the latter two almost exclusively one-gap. If it was a true 3-4, all three would be two-gapping almost every snap. And obviously, they aren't. Still, if it quacks like a duck...

My observation is more results-oriented than process-oriented. Whether Pete is intending to design a 3-4 style defensive line or not, we're seeing the results we would see with a 3-4 line minus the creatively blitzing linebackers -- that is, an elite run defense with little to no pass rush. I don't think it's an accident that Pete is starting three proficient two-gap run-stuffers along with four linebacker-sized players, at least one of which is primarily responsible for rushing the passer. But, obviously, this defense is missing a key element. The general consensus is that that element is an elite pass-rushing 3-tech that can collapse the interior of the pocket. This could be a problem, given the dearth of elite pass-rushing 3-tech's, in general, and especially in free agency in 2012 and in the upcoming draft. But I think there is another way. I love the 3-4 defense, so I am definitely rather biased, but I think Pete's defense could achieve elite results without an elite pass-rushing 3-tech. I think it's even possible with the majority of the personnel already on the roster.

And we've even seen a bit of what I'm talking about: creative blitz packages.

If Pete and John continue with this "1-gap 4-3 under with an Elephant and a bigger strong-side end [with a] 3-tech [that] is more run-oriented than is typical", coupled with big, physical, press corners, I'd like to see Bradley blitz more and often. Treat this defense strategically like a 3-4: stuff the run with your big boys, disrupt the wideouts with physical man coverage, and attack the pocket with random stunts and blitzes. The Seahawks have some of the personnel on the roster already. Malcolm Smith and his elite speed could turn into a serious blitzing weapon. We saw him lay the smackdown on Flacco on Sunday. Hill is a talented blitzing 'backer. Wright has pass-rush potential. Clemons is essentially a rush 'backer already, with the plus that he isn't a liability in the run game. And I'd love to see Kam blitzing more often, like Lawyer did last year. I'm not saying that the personnel currently on the roster could run this type of defense at an elite level. I do think, however, that the current personnel could produce as a solidly above average unit, and pure rush ends and 'backers are much, much easier to find in the draft.

I suppose the gist of what I'm driving at is that the Seahawks are developing an identity on the defensive side of the ball, and I want them to settle into it, embrace it, and run with it (pun fully intended). I see how this formula could be successful, at least hypothetically. People say that Pete has it backwards, that stuffing the run and forcing QBs to beat you through the air is putting the cart before the horse. Perhaps he does. But at least this defense is elite in any aspect. Many teams can't stop the run or the pass. I'd rather see the 'Hawks hold onto this elite run defense, and not sacrifice run-stuffing for pass-rushing if they have the personnel and ability to keep both. Particularly because this would free them up to focus primary resources like top draft picks and top free agent dollars on positions like cornerback, running back, wide receiver, and of course, quarterback.