Seahawks' fullback Michael Robinson found himself Pete Carroll's target of praise following Sunday's win against Baltimore and I must admit I hadn't really noticed him all that much in this one the first time around. In full game speed, it's only natural to watch the ball and as a consequence you tend to miss out on all the rest of the twenty-one players winning battles on a given play. Upon second viewing though, and especially after this quote from his coach, I sat up and paid closer attention:

"At the fullback position, Mike had his best game since we've been here. He really was effective. And he had the matchup of the century going against Ray [Lewis] and he did a very nice job. He didn't win them all - you're not gonna. But he was effective and had some key blocks. He dominated some blocks against their guys at times. So I was really fired up to see Mike play that well consistently and have such a big factor."

Though I have this weird fascination with huge, hulking fullbacks like Mack Strong or Vonta Leach (who nearly took Earl Thomas' head off this weekend, by the way) that clear running lanes and destroy anything in their paths, I also really like what Mike Rob brings to the Seahawks' offense, both on the field and off. Robinson isn't your typical fullback - especially as a former college quarterback at Penn State - and at 240 or so, is a tad undersized. For whatever reason - speed, athleticism, versatility in special teams - the Seahawks like their fullbacks in that weight range and haven't really deviated from that, personnel-wise.

As Carroll said, Robinson isn't going to win every matchup with linebackers in his path, and I suspect the Seahawks are fine with that, but he definitely made me a believer on Sunday against Ray Lewis - maybe you've heard of him?

Future Hall of Fame linebacker, All-Pro All Day, you name it, and I want to point out that this post's purpose isn't to poke fun at Lewis because that guy is a beast and everyone knows it. Instead, it's simply a testament to Mike Rob for getting the job done this time, something that I think deserves some attention and accolade.

Two particular plays in the 3rd quarter really caught my eye so I thought I'd break them down. First up - ball on the Seahawks 9-yard line with 9:31 in the quarter. The Hawks, as you might have noticed, had it in their mind that they were going to run the football on Sunday and they never abandoned it.

Below you can see some of the blocking responsibilities. Center Max Unger is going to down block on the defensive tackle Haloti Ngata, and left guard Robert Gallery is going to double up on him. Russell Okung is going to block with inside leverage, as will right end Zach Miller. This is going to open up a hole in the B gap, outside what would have been Gallery's shoulder. In true smashmouth style, this is going to leave Michael Robinson mano-a-mano with oncoming linebacker Ray Lewis. 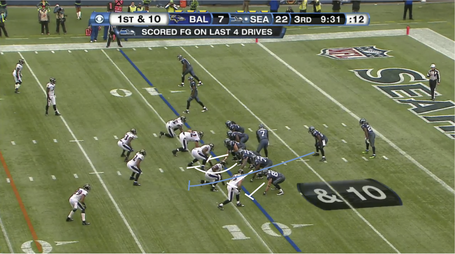 Below you can see that the Seahawks offensive line has done their job, and beautifully. A giant running lane opens up and Michael Robinson slashes into it. You can see Ray Lewis oncoming to close the gap. 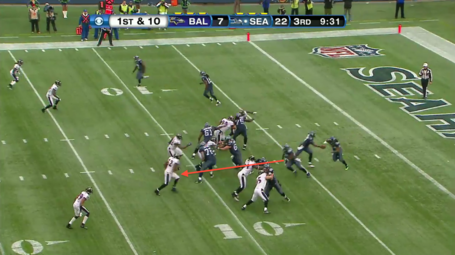 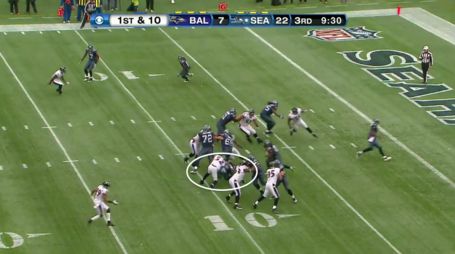 Above, you can see that Mike Rob throws a cut block on Lewis that manages to do the trick. It's not a huge, or bonecrushing hit, but it allows Marshawn Lynch to snake past. 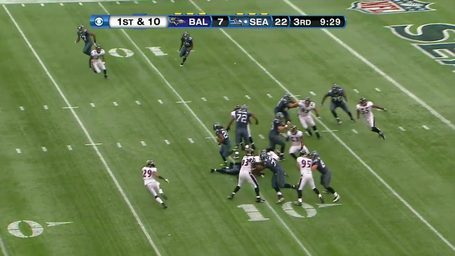 The run goes for 8 yards. Boom, you're now in 2nd and 2, very manageable. Darrell Bevell and Tom Cable heart this on first down. You know what else they love? Running the football again on second down. On one hand, this would probably be a good spot for a little play action, but on the other hand, I love the fact the Seahawks offensive line was opening up lanes.

The 2nd down play was a little more basic - with each lineman down blocking and Lynch diving through the B gap behind Michael Robinson. 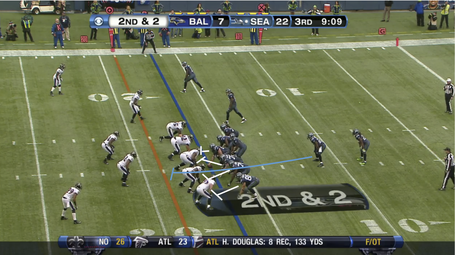 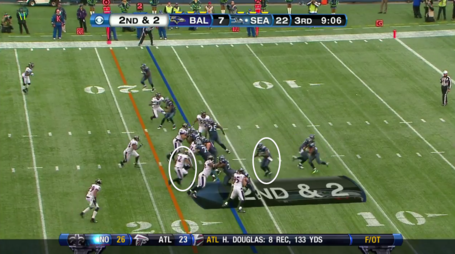 I've placed circles around Ray Lewis and Mike Rob, above, and if you look at the line, they've managed to get a little push and open up the b-gap lane.

Ray Lewis fills the gap, and Michael Robinson, with all due respect to Ray Lewis, knocks him on his backside. 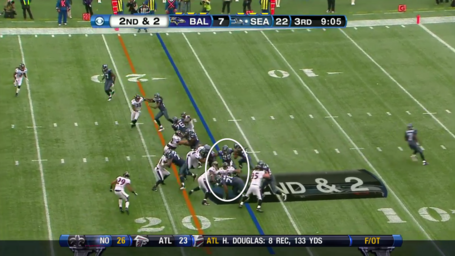 Kind of hard to see, but above you can see Lewis falling backwards and Lynch again snaking past them - switching lanes and going up through the A-gap to the right. 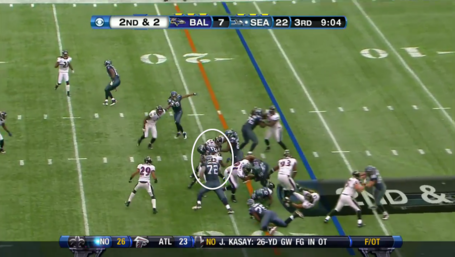 Great lead block by Mike Rob and just makes me intrigued with the role that fullback does have in this running game. I know that Tom Cable loves him some big backs/fullbacks, as evidenced by his former backfield in Oakland with Michael Bush and Marcel Reece, and Robinson leading for Lynch is a pretty fun thing to watch when the line does its job.

Off topic a bit, but intriguing and I'll leave you with this - with Lynch, Forsett and Robinson all in the final year of their contracts it will be very interesting to see what the Seahawks do in their backfield going forward. Will they stick with the smaller fullbacks and a bigger 'feature' back? Will they let all three walk? Will they bring up Vai Taua? Will they go the Oakland route with two bigger backs and one flash-back in Leon Washington? With so many pieces of the offense locked up for several years, the running back situation remains pretty fluid.