Share All sharing options for: The Seahawks' Offense and Explosive Passing Plays, Part 2

Part one of this article focused on Seattle's new found ability to create the 40 yard-plus pass play.  Now it's time to look at a very different type of explosive play. It's not a deep ball, or even a pass down the seam. This is an example of the Seahawks manufacturing the 20+ pass play with savvy play calling and offensive balance.

Going into Week 10 the Ravens were in the top three in at least three pass defense categories - touchdowns allowed, completion percentage against, sacks - and in the top 10 in about a handful of others.  One weakness that appeared in the stats was that they had allowed 24 pass plays of 20 yards or more, which was tied for 19th in the league. On the flip side Seattle had generated 24 pass plays of 20 yards or more, ranked 18th in the league.

I know this because I researched for an article for last week's game, but I went to Seattle to attend the game and ultimately had technical difficulties that prevented my posting. This is relevant only because heading in, I thought making 20+ pass plays with creative play calling could help create running lanes against a stout Ravens run D. The Seahawks needed to exploit this "weakness" for them to win the game. (I swear, the meat of these two paragraphs was written last week.)

On the opening drive in Week 10 Seattle went run, run, pass; three and out. After holding the Ravens to a missed field goal and keeping the juice in the stadium, the Seahawks came back out on offense: a pass to Zach Miller, Lynch run for the first down, Lynch for 21 on a pass, Washington run for four, pass to Lynch for 23 yards to the 1, then the touchdown.

This set up and play calling is much different than the setup we saw in part one, when Seattle went run heavy before the big play on second and long, which should be noted was a dissimilar distance and in a different part of the field than for these two plays. Here Seattle didn't go for the haymaker, but instead landed some heavy handed, wind-knocking body shots.

The twist here is both 20+ pass plays occurred on play action passes on 1st and 10 and then 2nd and 6 respectively, both open playbook downs. They came after ball-moving runs of four and five yards. The Seahawks had the Ravens defense off balance to a degree, and were able to use the same concept not once, but twice, to drive down the Ravens' half of the field.

Here is the first play. 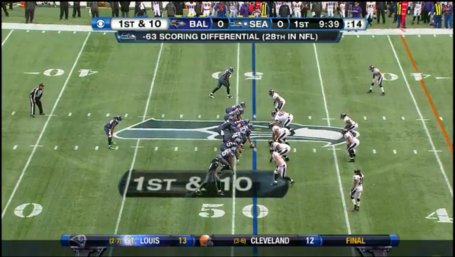 Seattle is in a one back, two tight end balanced set - they've had success with play action in this formation at other times this year as well. The Ravens are in a 3-4 look. (Again, Seattle just got a first down with a short pass to Miller and then a run with Lynch.) 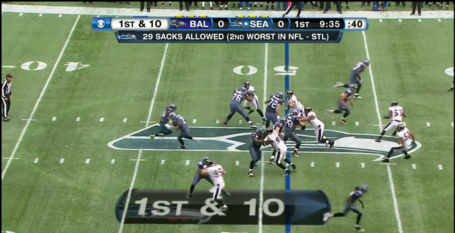 We see the play action here. The inside linebackers aren't fooled. Both Williams (top) and Rice (bottom) are releasing downfield, Miller is releasing down the seam (covered by 53) and McCoy has stayed in to block on the right side. As CBS politely points out, Seattle had allowed 29 sacks heading in - Hasselbeck was sacked 29 times total in 2010. So far, the pocket is clean. 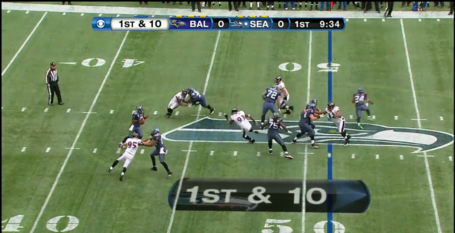 Now the pocket is obviously collapsing, the right side in particular. While we can't see downfield, we can see Lynch (at the Ravens 47) cutting towards the top sideline. He got there by releasing though the hole on the left side between Gallery and Unger. 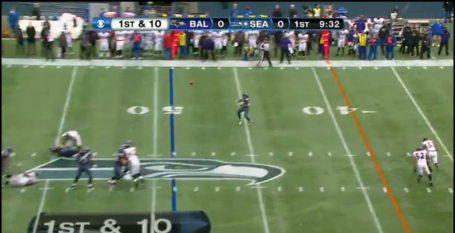 Lynch is wide open. The other three receivers are downfield, trying to run the coverage away from Lynch and his open space. The two linebackers paid attention to them and not Lynch. 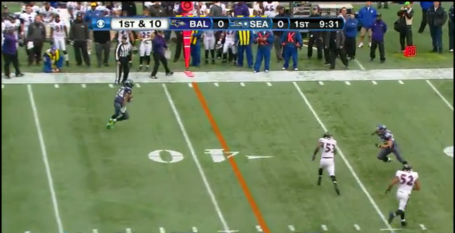 He makes the catch and turns upfield. 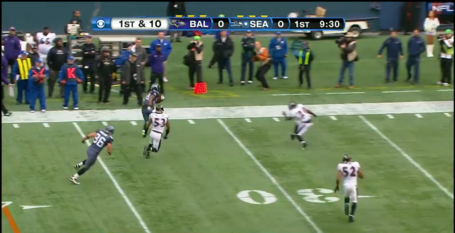 Miller misses his block, and Lynch decides to cut out of bounds instead of taking on three defenders. Yes Lynch could have gone all beastmode here, but he already got the first down and ultimately 21 contact free yards.

To sum up play 1; the Seahawks went run, throw on their first two 1st down calls, and went play action on their third. The line did a solid enough job blocking for Jackson and he found the wide open Lynch on the late developing route. Easy pitch and catch, solid execution.

Play 1 merely sets the stage, as play 2 is where the fun begins. 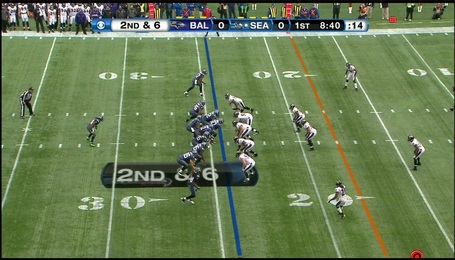 Different down and distance, but again a very similar look by Seattle. Do note that Sidney Rice (bottom) started outside and came in motion to that point, instead of lined up inside like he was in play 1. Also, Miller is now the second tight end on the right side, instead of a balanced set like in play 1. Again, the Ravens are in a 3-4 look, but with a bit of variation from play 1 in terms of defensive back placement. 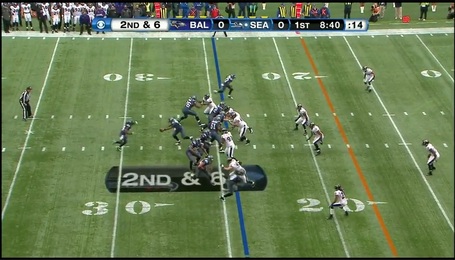 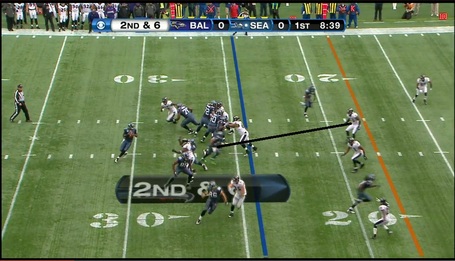 Unlike in play 1, the inside linebackers don't immediately drop. Miller draws the attention of an outside linebacker. Another difference from the first play is that Lynch is coming through the line on the right side. Because the camera is more zoomed out on this particular play, we can see the top receiver coming across the middle, clearing the top side of the field. The line is drawn from the Ravens 'backer to Lynch to show the upcoming 1 on 1 matchup. 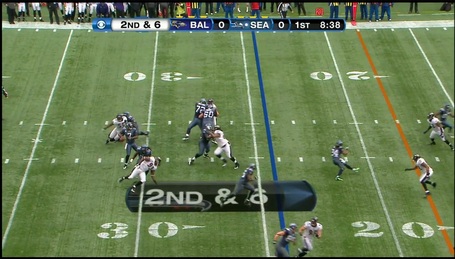 Jackson has a cleanish pocket, but obvious throwing lanes. Lynch makes a very sharp cut, one that this picture doesn't do justice. Also, the top of the field is now clear. 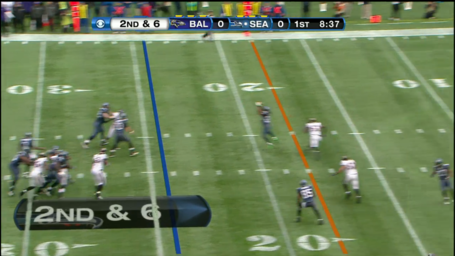 Jackson throws a rocket basically at Lynch's head, and Lynch snags it in stride. Nice hands here by Beef 'Mo. Now it's 1 on 1 versus the linebacker. 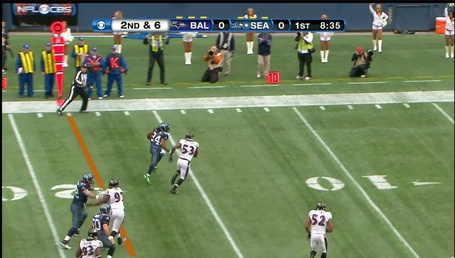 Stiff arm, or at the least time for some contact? 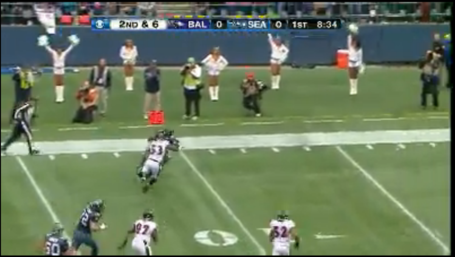 Nope. He refrains, and turns the corner. 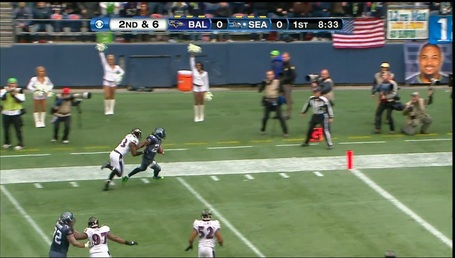 The linebacker gets his hands on Lynch and creates just enough contact... 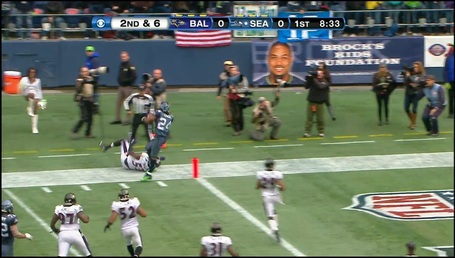 ...To get Lynch off balance, spinning and eventually out at the one. However, not before a gain of 23 yards and the Seahawks' second non-deep ball, explosive play of the drive.

A couple of things stand out to me about both plays. First, we see Lynch in space gaining yards, almost untouched. Second, Jackson had enough time to find the open man. Third, both were effectively the same play. The design drew the defense into defending the clump of players downfield and not the isolated Lynch, who ultimately is 1 on 1 with the linebacker in a matchup he can win. Different than the haymaker; this call can be an effective punch if the pass is completed, but can be a legit body blow if Lynch wins in the open field.

On this drive Seattle put themselves in position for needing only a jab for the knockdown. In highlighting Seattle's success here I do not want to ignore the fact that the next time the Seahawks got the ball, 1st and 10 in the redzone after the Ravens fumbled the kickoff; Seattle ran four times in a row, didn't target Mike Williams at all and the stadium wide groans about conservative play calling began - Carroll noted after the game going run heavy was part of the game plan.

For the game Seattle went 1 for 5 in the redzone, 1 for 3 in goal to go situations. Unfortunately their inability to score from close is becoming somewhat worrisome. Like the penalties, it must go away. The point in highlighting these two plays is at least the Seahawks got a 'seven' on the board before they went redzone-stale.

On a more general note; I learned through writing this article the definition of an "explosive play" can be an interpretation. Part one highlighted the drop-back-and-chuck-it explosive play, where as these two plays were manufactured by play calling and exploiting a matchup. Neither viewpoint towards what is an explosive play is incorrect; it's more how you choose to look at the definition.

By no means am I declaring the offense "explosive." But, the deep ball in part one and these two plays show the Seahawks are beginning to better establish their formula for moving the ball. Using play action and the short passing game as an extension of the running game is part of Pete Carroll's style; getting the running back involved in the passing game is in Darrell Bevell's history, notably with Chester Taylor in Minnesota.

Obviously Seattle has hit a bump in the road losing the right side of their offensive line, and Tarvaris Jackson is in continuous pain.  However, barring a major step backwards, Pete Carroll and his staff will continue to implement a versatile offensive attack. These three examples are small pieces of the whole picture, as the offense will hopefully evolve and find more ways to create the explosive play.