Breaking Down a Seahawks Touchdown Drive

Share All sharing options for: Breaking Down a Seahawks Touchdown Drive

The Seahawks didn't muster a whole lot of points on Sunday but did manage to put some yardage up - 411 yards to be exact - with 350 coming through the air. Tarvaris Jackson accounted for 323 of those yards in two and a half quarters worth of play (a career high) and looked comfortable throwing from the pocket. He threw with poise, confidence, and accuracy. He was authoritative. Where'd that come from?

The Seahawks most impressive drive started at the 12:29 mark of the 4th Quarter. Cincy was up 17-6 at that point and it seemed like if the Seahawks were going to get back into this game the time to do it was now. They started at their own 21 after a Kam Chancellor interception (tipped by Richard Sherman), and immediately got themselves into a 3rd and 11 situation. Great.

Don't worry. It's Doug Baldwin time. 11:24 now on the clock. Seahawks backed up to their 19 and go to their spread look with five wide receivers. Doug Baldwin on the right, Sidney Rice in the slot, Ben Obomanu the split end, Kris Durham slot left, and Golden Tate on the wing at the bottom of your screen. Tarvaris is in the shotgun.

I've highlighted the approximate routes each receiver will take. Baldwin does a delayed release, fakes to the middle, gets his man to turn his hips, and goes to the outside. 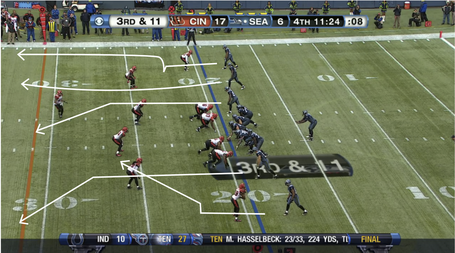 You can see that Golden Tate runs a stop route, Durham does deep, Obomanu runs a post and Rice runs a seam route. TJack gets good protection on the play and lets it fly to a sideline streaking Doug Baldwin.

Because Rice is running the deep route, the safety over the top has to worry about him and this creates an open zone near the sideline. This isn't an easy pass by any stretch; over the hands of the corner but with enough zip to get through before the safety has time to react. 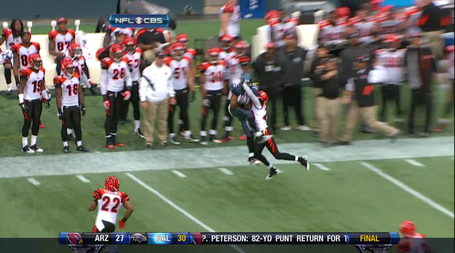 The corner actually does a pretty good job to get close to the play but doesn't get his head around at all. Doug Baldwin leaps up and makes the catch through the outstretched arms of the cornerback and gains 31 on the play. He's now averaging 16.1 yards per catch on the year (25/403). Not shabby.

Seahawks are now into the Bengals territory. Tarvaris sees something in the defense that he likes - probably the single deep safety that has left Rice on an island to the left - and audibles out of the called play (which was most likely a run on first down). I LOVE this. He repositions Michael Robinson and Marshawn Lynch from the I-formation into a split back look to counter the two menacing defensive backs on each side of the line.

Rice on the left wing, Doug Baldwin on the right. Zach Miller is the in-line tight end to the right. Ball is snapped. 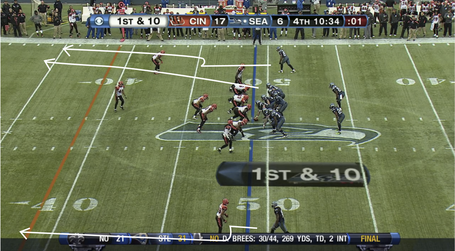 Lynch runs up to the line at the snap and the Bengals run their nickelback in a blitz off the weak side, as shown below. 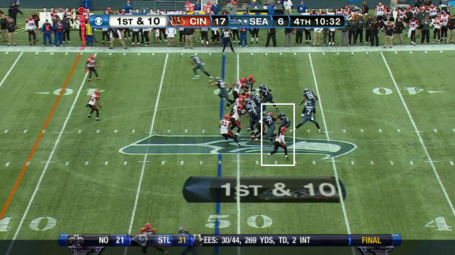 Lynch does a superb job of picking up the blitz. I was SO pumped about this during the live broadcast. Huge blitz pickup there that kept the play alive and look what happens. 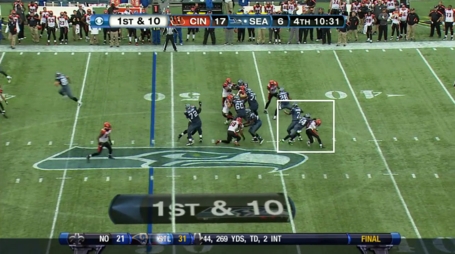 Below, you can see it's a back shoulder throw. It's not a great throw by any means but when you have Sidney Rice on an island you really just throw it up there and let him go get it. That's why you're paying him $41 million bucks. Because he's good at football. 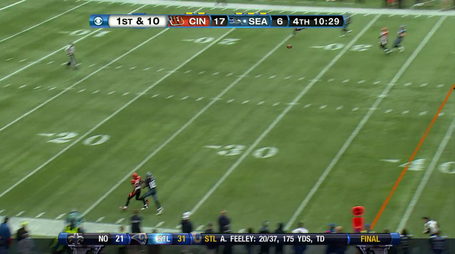 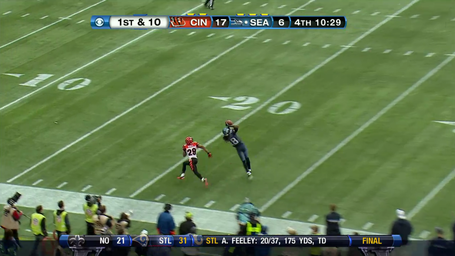 Rice repositions himself with respect to the corner and comes back inside to grab the pass. This one is good for 35 yards. Nice audible by Tarvaris Jackson.

Now the Seahawks have just gained 66 yards in two plays and sit on the Bengals 14 yard line. 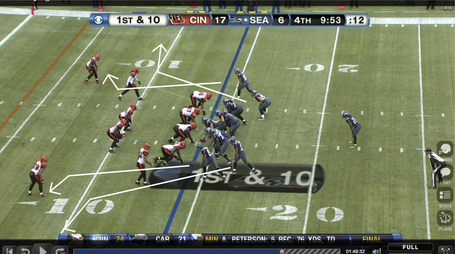 Seahawks run a tight formation - three wide receiver one tight end with Lynch the lone back. Obomanu and Baldwin on the left and Golden Tate and Zach Miller on the right. Tate's just going to run a simple combo route with Miller here as the arrows show, and he sits down nicely in the open part of the zone. 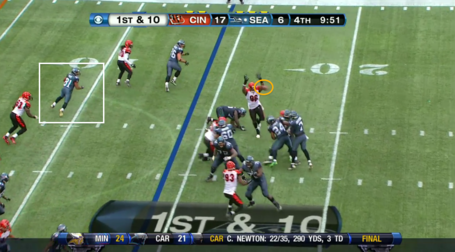 Jackson hits him, Tate turns upfield and picks up a few hard yards after the catch for a total of nine yards gained. I remember Derek Stephens tweeting at this point in the game that he was glad to see Tate where he belongs: underneath.

This play puts the Seahawks on the 5 yard line and two Marshawn Lynch rushes later, they're in the endzone. I was glad to see Lynch get the payoff - his blitz pickup was so pivotal in this drive and he'd been frustrated so badly early on, he really deserved it.

Anyway - obviously this was a bright spot in the game and I like to break down consecutive plays to try and get a feel for how play calling works and how the Seahawks might be able to keep defenses on their heels. In this case, Jackson never let off the gas pedal, audibling into an iso for Rice that picked up a huge chunk of yardage and got the Seahawks back in the game.