DK edit: I thought this was a fun read. Enjoy.

I was reading the scouting reports of each player on the Seahawks' roster yesterday on their SBNation site, and I started looking at their offensive line. Of all the units on the team, this group of large men has perhaps taken the most heat so far this year. And with good reason! They've been fairly bad at times. There have been some bright spots (like Max Unger and Russell Okung) some not-always-negative spots (like John Moffitt) and some pretty-much-always-negative spots (Robert Gallery, Paul McQuistan, and James Carpenter).

For really good in-depth analysis, check out Word of Muth at FootballOutsiders.com, where Ben Muth (former OT for Stanford, and was named 2008 first-team All Pac-10) has picked three offensive lines to analyze on a weekly rotating basis, and has provided good insight into the Seahawks, Titans, and Saints hogs so far this year. Also, Brock Huard's weekly "Chalk Talk" segment over at MyNorthwest.com is pretty useful for gleaning little bits and pieces about how these big boys do work.

All that being said, I wanted to get into some personal details about the guys who have been such a focus, both in the offseason and during the games this year. They will have no secrets when I'm done with them. Their lives will be open books. They fear me. Ok, on to the meat on the meaty guys.

To start off, there are currently nine offensive linemen on the active roster. Max Unger is the only pure center, with Lemuel Jeanpierre listed as a G/C. Robert Gallery and John Moffitt are the two pure guards. Russell Okung, James Carpenter, Jarriel King (pronounced "juh-RELL"), Paul McQuistan, and Breno Giacomini are all listed as tackles. There are no offensive linemen on the PUP or IR at this point (*crosses fingers* *knocks on wood*). Paul Fanaika (listed as a guard) and Brent Osborne (listed as an OL) are on the practice squad.

So what's the big deal with these guys, other than them being big?

Well, a big deal was made at the beginning of the season that the Seahawks had the youngest starting OL in sixteen years, and it's definitely showed. I think the most vitriol has been "spewn" forth in the general direction of James Carpenter and Robert Gallery. I think the former has a good excuse, but the latter? Well, he's just old.

But even with Gallery, the average age on the Seahawks' offensive line (among those on the active roster) is 25.44. Throw in the guys on the practice squad, and that number drops to 25.04. This includes Gallery at 31, McQ at 28, and Breno at 26. Moffit, at 25, is actually older than Russell, Carpy, King, and good ol' Lemuel (all 24), and only six months younger than Maxwell McCandless Unger, esteemed starting center. On the PS, Fanaika is also 25, and Osborne, a rookie out of Harvard (a smart one, eh??) is 22.

In all of this, the biggest surprise to me was James Carpenter. He's only 22. Holy carp, 22. He was born in March of '89. He's four freaking months younger than me. The day I realized I was too young to be a realistic sports prospect was a sad day for me. Now I'm older than the Seahawks' first round draft pick. Gosh, my back is starting to tighten up just thinking about it. I have a lot more patience for Carpy's learning curve now. If anything, he always has the "What have you done lately?" to pull on me.

Now, I've been bordering on fat jokes this whole article, so don't laugh during this next section. I'm gonna talk about how fat these guys are. They are some big humans.

The average weight of the nine on the active roster is 315. Our buddy LJP is the lightest of the group at "only" 301. I wonder if he gets made fun of? Imagine jokes among offensive linemen. We laugh at fat people (wait, you don't? Oops.), but they probably get a kick out of the skinny guy on the block and kick him and make him their errand boy. "You don't want to take my uniform to the laundry basket? Really? Really. Ok yeah, that's what I thought. Skinny lil' punk."

If that little narrative holds true, then the guy who never takes care of his own jersey is Methusaleh Gallery, weighing in at a sprightly 325. Carpenter and King are both pretty close, at 321. Interestingly, on the practice squad dwell Fanaika (327) and Osborne (288). So help our Harvard boy if he ever makes active roster. Smart AND skinny?? He's gonna be screwed.

Finally, I was struck at the height of these boys. There isn't a single offensive lineman shorter than 6'3" in the employ of the Seahawks. Only Lemuel and and Osborne are even that short (geez, these poor guys).

Their average height is 6'5", which is precisely where Maxwell, Russell, Jarriel, and James (and Paul F.) measure up. McQuistan is uglier 'n a ugly thing (seriously, look at this), and is also 6'6". Giacomini and Gallery are both 6'7".

I'm not always someone who prescribes to the theory that QBs need to be tall to see over their lineman, but in this case, I'd say a short QB could have real issues playing behind this line. They are BIG. If you want a guy to think of when you're trying to picture their average size, think of Steve Hutchinson. Yeah, that big. 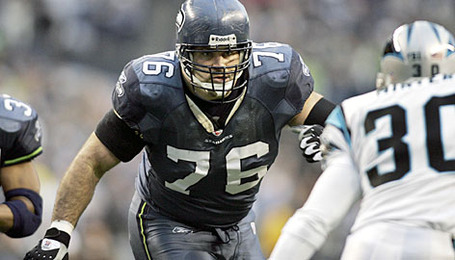 In all seriousness, this is a really young line. I don't think that can be overstated. These guys are babes, and they're getting some of the most intense OJT anyone could subscribe to. There will be learning curves, and there will be ugly mistakes. But there will also be flashes of brilliance as they get used to one another and begin to grow their big boy teeth.

Things may be sketchy and rough now, but have patience. When the Seahawks acquire their quarterback of the future, he will have a helluva wall of intelligent, experienced flesh protecting him and road-grading for his backfield buddy.